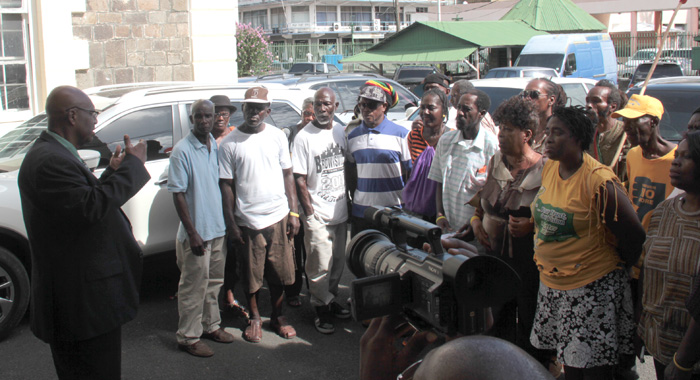 Leader of the opposition Arnhim Eustace speaks with party supporters outside the courthouse after Thursday’s hearing. (IWN photo)

High Court judge Justice Brian Cottle on Thursday reserved judgment on a new application by the government to throw out the two petitions filed by the opposition in relation to the December 2015 general elections.

“I do not propose to give you a summary decision today. I think it is the sort of thing I would have to write something on,” Cottle said after hearing submission by both sides.

The judge noted the public interest in the case and said the public would want to know why the court has arrived its decision.

“I think it is my duty to write it. I don’t want to write it. I would prefer to enjoy my carnival but I think that I must write it,” he said, and promised that he would do so as quickly as he can and would put aside the other matters he is working on to do so.

Lawyers for the Unity Labour Party (ULP) government is again asking the court to throw out the opposition New Democratic Party’s (NDP) election petitions, saying that they were improperly filed.

They are in essence making similar submission to those made in chambers in March, when the judge ruled that the government’s application to strike out the petitions were improperly filed.

Justice Cottle also said in his judgement then, delivered on April 4, that if the government made the same argument in open court at the beginning of a trial, they were bound to succeed.

The opposition has said that the government argument is a technical one.

But on Thursday, it became evident that the government may have itself hit a technical snag.

Lawyer for the opposition, Stanley “Stalky” John, QC, said that the government’s application to strike was vexatious, as it was yet to discontinue the initial application to throw out the petition.

He said this meant that the government has two proceedings before the court on the same matter.

But counsel for the government, Senior Counsel Antony Astaphan, told the court that based on the judge’s ruling, he does not understand the initial application to throw out the case to be alive.

“But even if it is, we now having filed a motion in open court, there is no question that the application is stayed… The application to strike in chamber is alive for what purpose? We cannot go back to chambers to have it read again…” he said, noting that the judge has already ruled in chambers that he had no jurisdiction on that matter.

Astaphan further noted that an application in chambers cannot be brought into open court.

“So, we have to come with a new process,” he said, adding that in view of the judge’s findings, the application is dead and serves no useful academic or judicial purpose.

“I suppose my learned friends and I were wrong in not filing a notice of discontinuance. Forgive us for that, M’Lord; forgive us, M’Lord,” Astaphan said.

But John, speaking to reporters after the heading, said that his submission should not be dismissed as a mere technical point.

“But you see, the reason we are here dealing with these preliminary points is because of technical points that were raised,” he said.

Counsel for the government were at pains to try and explain to the judge that the election petitions are not valid because “it is simply a matter of a name not being in a particular part of a document why in fact the petitions should be thrown out,” John said.

“So, this is all about technicality and the technicality in election petition proceedings are crucial and it is improper for them to have applications which we have gone in there and dealt with and the judge had pronounced on and for them without dealing with those fresh applications against us on the same points.

“That is something that the judge has to get past. They have not assisted the judge in relation to that. These are matters we will revisit when the judge has pronounced on the applications,” John said.

He said the judge had said in no uncertain terms that the most efficient and appropriate way to deal with these matters in the public interest is for the preliminary issues to be reserved as questions of law for the court of Appeal to decide.

The other side has filed motions to strike out when in fact the notice of application, which the judge said he had no jurisdiction to hear, are still subsisting on the record, John said.

“And we raised this because what we say is this is an abuse of the process of the court for them to vex the petitioners as it were with two sets of proceedings dealing with the same thing.”

John was confident that he had presented a strong case.

“I think the submissions are cogent, coherent, very relevant and they elucidate for the court the issues that are required to take into consideration. But, at the end of the day I am of the view that the judge’s own take on how these preliminary issues should be dealt with is still the most appropriate way for them to be dealt with,” he told reporters.

Both sides were confident, with Grahame Bollers, a lawyer for the government, saying “We are confident that we are going to succeed”.

But after Thursday’s proceedings, one thing became clear: however the judge rules, the case will end up before the Court of Appeal.

John had made that observation at a court hearing on the petitions last month, and Richard Williams, a lawyer for the government made that same declaration to reporters on Thursday.

Asked if John’s submission that the matters be sent directly to the Court of Appeal is of merit, Williams told reporters:

“Let us wait and see what the judge says. I have had enough experience in the practice of law to know that you could never tell exactly what a judge is going to do. Sometime, you go to court, you feel one hundred per cent sure and you end up not being successful.”

Leader of the Opposition and President of the NDP, Arnhim Eustace, who attended Thursday’s court hearing, said he was happy with the case John had presented on behalf of his party.

“I am very pleased with the case that Mr. John has put forward on our behalf and I’m pretty confident, based on his case that we will do well on that matter… I was hoping that he would rule today on the matters that are before him.”

The NDP is asking the court to declare them winner or order fresh election in Central Leeward and North Windward, two of the eight seats that electoral officials say the ULP win to retain a fourth consecutive term in office.