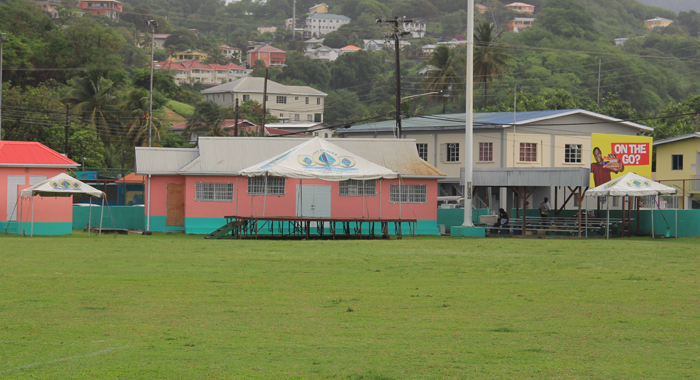 The man was found hanging from the tent at the centre of the photograph. (IWN photo)

The body of an elderly man was found hanging by the neck on the Calliaqua Playing Field Sunday morning.

The death brings to two the number of senior citizens found dead in a similar manner in this country over the last month.

Police have identified the man as 67-year-old Errol Chambers, also known as “Speeder”, of Glen.

They say he is a former civil servant and was once an employee of the then Chamber of Industry and Commerce Car Park in Kingstown.

Chambers’ body was found hanging from under a tent that has been pitched for a sporting event at the playing field.

His feet were barely touching the ground and his torso was resting somewhat against the stage that had been erected under the tent.

He was wearing a red t-shirt, green shorts, and brown loafers.

On May 15, the body of 66-year-old Arnos Durrant of Lowmans Windward was found hanging from a tree in his community.

An autopsy concluded that he had ingested a poisonous substance, but died of asphyxiation.

3 replies on “Body of elderly man found hanging in Calliaqua”