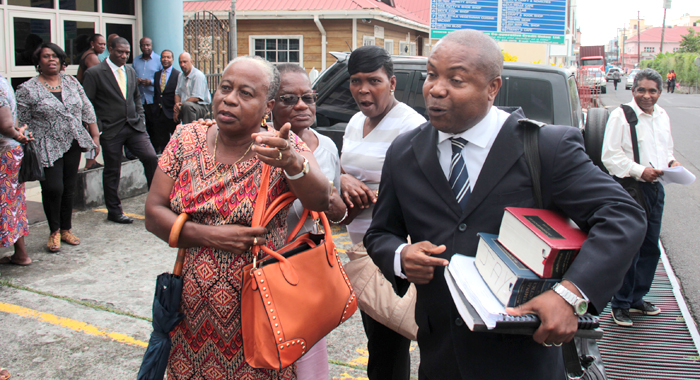 In the early stages, the exchange between NDP activist Margaret London and Assistant DPP Colin John appeared to be bantering between the two. (IWN photo)

Assistant Director of Public Prosecutions, Colin John and opposition New Democratic Party (NDP) activist and radio personality, Margaret London, traded insults outside the Kingstown Magistrate’s Court on Monday, calling each other “stupid” and “dotish” (doltish) and at one point getting mildly physical.

The exchange occurred after a hearing in the Ben Exeter and Shabazaar GunMunro George matter in which magistrate Bertie Pompey agreed with the defence that he should recuse himself from the case in light of comments he made during the trial on June 6.

The exchange began shortly after reporters had completed an interview with John, who was standing outside the court, where defence counsel, supporters of the NDP and other persons were gathered.

Most onlookers seemed and John and London seemed to have taken the exchange as friendly banter between the two.

While iWitness News is unsure of how the exchange started, we became aware of it when John told London she gets fame from criticising him.

The two proceeded to call each other “stupid” and “dotish”, with John saying that London only became famous after she began hosting her radio programme.

London told John that he has a degree in law and she has a master’s degree in nursing as the two were walking in the direction of Kingstown Park, where their cars were parked.

“That’s your only claim to fame. Yo’ stupid self,” John told London of her radio programme.

“Yo’ getting fame for stupidity. Yo’ so blasted dotish; you so stupid. Watch how you bring the pros–” London was saying as John stopped walking and hunched her.

“Yo’ wah push me over dey,”she said in reference to the gutter at the side of the road.

“Yeah. If again?” John said as London responded, “You know who yo’ dealing with and nudged the prosecutor in the back with her umbrella.

At the same time, defence counsel, Kay Bacchus-Browne, who, along with Israel Bruce, represented Exeter and George in the case stopped in her car and made a light hearted comment.

London pointed out that John had hunched her.

Executive Editor of iWitness News, Kenton X. Chance, sensing a change in the mood of the exchange, told London to leave the prosecutor alone.

She continued her protestations that John had elbowed her and asked if Chance had not seen that.

He responded, “Yeah. But leave the man.”

At that point, London returned to outside the courthouse and went to retrieve her car after the prosecutor left.