Both sides ready but which magistrate would hear Exeter case? 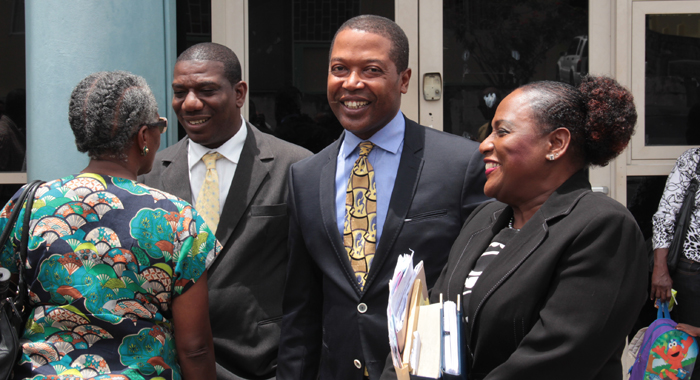 Both the prosecution and the defence say they are ready for a new trial in the case involving opposition New Democratic Party (NDP) candidate Ben Exeter and Shabazaar GunMunro George, one of the party’s youth activists, after magistrate Bertie Pompey recused himself mid-trial on Monday.

But a real question may be which of the sitting magistrates is the defence likely to accept as an impartial adjudicator.

That was one of the points that Assistant Director of Public Prosecution, Colin John, made in an interview with reporters after Pompey granted an application by defence counsel, Kay Bacchus-Browne at the Kingstown Magistrate’s Court on Monday to recuse himself.

Bacchus-Browne asked Pompey to recuse himself in light of a statement he made on June 6 during the trial when he said Exeter had been charged with breach of the peace, which was not the case.

The defence counsel said Pompey was giving evidence from the bench and said the retired deputy commissioner of police was a police magistrate, in a case in which there is a police prosecutor and only police witnesses.

John is a former member of the Royal St. Vincent and the Grenadines Police Force. He said he accepted the magistrate’s decision to recuse himself, noting that it’s his discretion to do so.

“I am of the opinion that he could have delivered a fair and unbiased decision but it’s his call at the end of the day and so I have to abide by it,” the assistant DPP said.

He said the case will be heard before another magistrate, even as he speculated about what the defence might do.

“I just hope that whichever magistrate, the same frivolous and stupid — in my opinion –allegation is not made because St. Vincent is a small place, there are several magistrates, you can always find some reason to affiliate one magistrate to something,” he said.

Browne is a former Member of Parliament under the ruling Unity Labour Party, but quit electoral politics in 2010.

When it was noted that Browne is no longer in politics, John said, “Yeah, but I know how we operate here. I would not put it past the defence to come with those kinds of allegations.”

Asked if he thinks such arguments are an attempt by the defence to frustrate the system, John said:

John was, however, confident that when there is a magistrate the defence is “comfortable” with, the prosecution will secure a conviction.

Exeter was the NDP candidate in Central Leeward, one of two constituencies that the ruling Unity Labour Party won where the NDP is challenging the results in court.

Asked if the latest development in the Exeter case, in light of the election petitions in the High Court, though unrelated, would create more uncertainly, John said:

“Well, the matter was stopped as a result of the prosecution’s position, you know, it’s the defence. So, it’s up to them. They have to know what they want. I am prepared to see the completion of this matter as quickly as possible. “

Meanwhile, Bacchus-Browne welcomed the magistrate decision to recuse himself.

“I am very satisfied because when all is said and done, it is very important that the public believe that justice was seen to be done,” she told reporters outside the court on Monday.

“They could not get around the fact that the comments which were made should not have been made and even though he didn’t admit that he was wrong to make the comment, he did the right thing and I commend him for that,” Bacchus-Browne said of the magistrate’s decision.

She noted that the court will have to get another magistrate to hear the matter, adding, “But I am prepared. Ready and waiting.”

Exeter was arrested in Kingstown on Dec. 29, 2015, where crowds of NDP and Unity Labour Party supporters had gathered as the ceremonial opening of Parliament was being held.

He is charged that on Dec. 29, 2015 at Kingstown, he assaulted Corporal 632 Morris, acting in due execution of his duty.

He is also charged that at the said date and time he resisted the arrest of Corporal 632 Morris, acting in due execution of his duty.

George, 18, who was arrested at the same time, is charged that on Dec. 29, 2015 at Kingstown, he obstructed Corporal 632 Morris, acting in due execution of his duty and had in his possession an offensive weapon, to wit a zapper.

3 replies on “Both sides ready but which magistrate would hear Exeter case?”