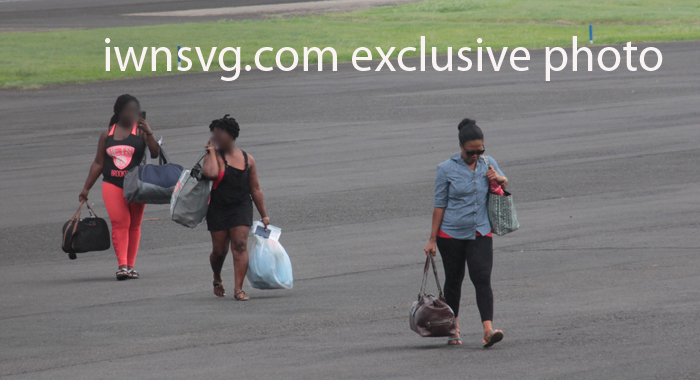 Desrey Vernice Stowe, right, and other passengers walk across the apron after landing at the E.T. Joshua Airport on Wednesday. (IWN photo)

The Vincentian woman who was fined BDS$50,000 for importing two bottles of liquid cocaine into Barbados earlier this month returned home on Wednesday, having paid the fine.

Desrey Vernice Stowe, a 35-year-old mother of two, arrived at the E.T. Joshua Airport on board a LIAT flight at 3:15 p.m.

Officers from the Narcotic Unit arrived shortly after.

The woman went inside the arrivals hall of the airport, where she spent some time before leaving for Kingstown, along with the police officers in a private car, driven by police.

Stowe’s mother and lawyer Grant Connell were outside the airport waiting for her and left in Connell’s vehicle shortly after the police.

She was taken to the Central Police Station in Kingstown, where she was processed and released shortly after.

Stowe was charged in Barbados with possession of 1.5 kilogrammes of cocaine, possession with intent to supply, trafficking and importation.

She pleaded guilty and the fine was imposed on her.

Police in Barbados say tests revealed the liquid to be cocaine.