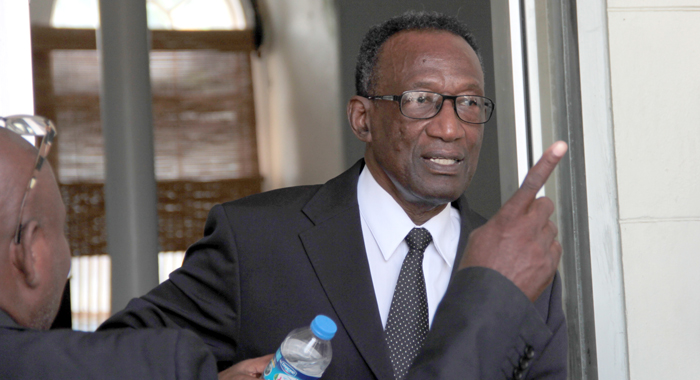 A Vincentian lawyer for Buccament Bay Resort on Tuesday told the High Court of England & Wales that some information in an affidavit he reportedly submitted in an earlier court matter in Britain was not true.

The lawyer, Samuel E. Commissiong, admitted to the court, which is meeting in Kingstown this week, that the signature on the affidavit is his.

He, however, told the court that he had “suspicions” about the last paragraph of the affidavit — which was before him and the rest of the court in electronic form.

Asked by the presiding judge, Mr. Justice Colson, what were his suspicions, Commissiong said, “I wonder if–” and trailed off.

“You wonder what?” the judge said.

The lawyer responded: “If it was tampered with.”

Pressed on the matter, Commissiong told the court that the signature on the document is his but said he would not have produced the document because he knew the information was untrue.

But Queen’s Counsel Justin Fenwick, a lawyer for the defendant, asked Commissiong if it is true that he was disciplined in the local jurisdiction for producing a document that was false.

Commissiong said yes, but added that the circumstances then were different.

In January 2002, the High Court fined Commissiong EC$5,000 and ordered him to pay the cost of the legal proceedings after he was asked to show cause why he should not be suspended or struck off the roll of Barristers/solicitors.

Commissiong was asked to show cause, after he, acting as the solicitor for Gourmet Foods (St. Vincent) Ltd. in an intended action against Friendship Bay Hotel Ltd. sent to an associate in Europe a document appearing on its face to be a judgment in default of appearance, over the signature of the Registrar of the Court, and appearing to carry the seal of the court, in an action between Gourmet Foods as plaintiff and Friendship Bay as defendant, whereby it would appear that judgment in default of appearance had on a given day in July 1999 been entered for the plaintiff against the defendant for a specific sum of money.

The document differed from a perfect judgment in default of appearance properly issued by the court only in the minor detail that it lacked a case number.

Tuesday’s exchange took place as Commissiong gave evidence in the case in which Harlequin has lodged a US$70 million claim for professional negligence against its former accountants and auditors Wilkins Kennedy — a firm.

The case is being heard in the High Court of England & Wales, with one week of the of the claim taking place in St Vincent and the Grenadines, home of a central feature of the claim: Harlequin’s Buccament Bay Resort hotel, located at Buccament Bay.

The three main figures in the case are Padraig “Paudie” O’Halloran, formerly of ICE Group — Harlequin’s contractor for Buccament Bay Resort; Martin MacDonald — Wilkins Kennedy partner and Harlequin’s appointed accountant/representative from 2006 to 2010; and Jeremy Newman — former Wilkins Kennedy senior manager (resigned in 2013) who worked for O’Halloran and ICE Group from 2009.

the ownership of parcels of lands on which some sections of the Buccament Bay Resorts is built.

In addition to being a lawyer for the resort, Commissiong is also company Secretary for Buccament Bay Resort Ltd. and Harlequin Property SVG.

Commissiong said he was involved in 2011 in drafting a document in which Vincentian Bernard Punnett, who co-owns lands near the resort, had agreed to sell to the resort a part of those lands.

The lawyer told the court that Punnett’s sister, Bernadette Punnett, is co-owner of the land and the resort could not have obtained permission to build unless she agreed to the sale.

Commissiong told the court that while Mr. Punnett signed the draft sales instrument, the transaction was not completed because Ms Punnett did not agree.

The court heard that Commissiong did not include this information in an affidavit, which was submitted to discharge Harlequin on an injunction in Britain to freeze its assets.

The injunction, which was filed and discharged in March 2013, was the latest move by British investors in Harlequin to recoup their money. The bid to freeze the assets was ended after the investors, who were trying to get back a total of 500,000 pounds sterling, were paid out.

In court on Tuesday, Fenwick asked Commissiong why he said in his witness statement that the five acres of land were paid for when he knew that was not the case.

Commissiong said because he knew Mr. Punnett had large resources of land that he owns individually and could exchange them for properties.

The court heard that blocks 1, 2, and 3 of the resort were being constructed on lands owned by Punnett and his sister.

Construction work on large sections of the resort has been halted amidst a number of legal and other developments.

But Commissiong said in earlier communications that Harlequin had signed, contracted and paid for the lands in full. Asked why he did this, Commissiong said this is what he was told by Mr. Punnett in discussions sometime between 2010 and 2011.

Commissiong said he did not know otherwise.

The court further heard that the apartments that form part of the resort, were being constructed on lands owned by the Punnetts, but Commissiong, said in his affidavit that none of the resorts properties were on the Punnetts’ land.

Commissiong told the court that he has acted for Dave Ames, owner of Harlequin Property, since 2005 in acquiring property in SVG, obtaining planning permission for various activities and “tried” to advise him about the laws of SVG.

He said was involved in receiving money from Harlequin and paying them out on Ames’ instruction.

Commissiong said the monies were principally for the sale of land, other purchases for the company and paying people to do things.

When asked by Fenwick, Commissiong, however, said he did not act as a kind of bank.

He told Fenwick that it is not the rule in SVG that solicitors must keep ledgers of client’s monies.

Commissiong said the account to which Harlequin sent money was in his name and he was the sole signatory and that he kept records in receipt form.

From 2008 to 2010, O’Halloran was Harlequin’s contractor to build Buccament Bay Resort, Harlequin’s flagship luxury hotel that was to be the first of several across the Caribbean.

Harlequin says that by June 2010, it discovered that the hotel would not open on time.

It is claiming that this is the case O’Halloran had stolen tens of millions from the development with assistance from Newman.

They are alleging that O’Halloran spent the money that was reportedly diverted on a US$6 million boat, a lavish wedding, a private jet, a race track, a US$65,000 diamond ring, and other personal purchases.

Harlequin itself is the subject of a Serious Fraud Office investigation in the United Kingdom.