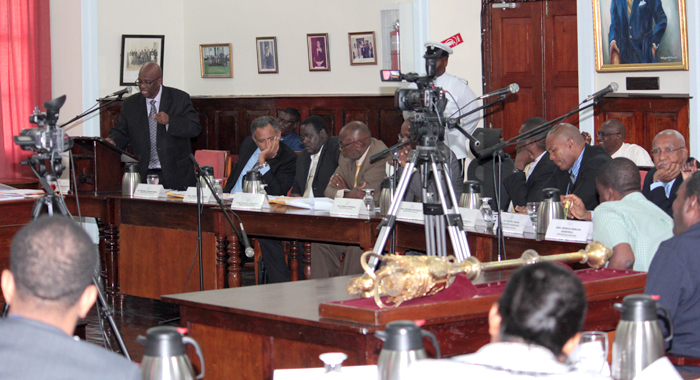 Opposition Leader Arnhim Eustace and other opposition MPs in Parliament in June, the first of two times for this year. (IWN photo)

Opposition Members of Parliament turned up to Parliament on Thursday for the first time since they were sworn in on Dec. 29.

The opposition legislators had been staying away from Parliament in protest of the results of the Dec. 9, 2015 general elections, which their New Democratic Party (NDP) has accused the ruling Unity Labour Party (ULP) of stealing.

“It would be remiss of me if I don’t congratulate the members of the opposition for finally accepting the wishes of the person who voted for them to sit in this parliament and I congratulated them for coming back to the Parliament today.”

Francis is also General Secretary of the ULP and was the party’s campaign manager in the December polls.

The opposition turned up to Parliament on a day when High Court judge Justice Brian Cottle would deliver a judgement in which he threw out the two election petitions the NDP had filed, challenging the results of the election.

The hearing in that matter had taken place one week earlier and Cottle had said he would have put aside the other matters he was working on to focus on the case.

On June 1, Clerk of the House of Assembly Nicole Herbert wrote to the opposition MPs informing them that should they continue to stay away from meetings of Parliament without excuse, their seats would have become vacant.

Standing Order 74(2) says: “If any Senator or Elected Member is absent from the House for more than three consecutive meetings without the leave of the Speaker obtained in writing before the expiration of that period, the Clerk shall, immediately after the third such meeting direct the attention of the Member concerned to the provisions of this Order. If the Member continues to be absent for the next three meetings then, unless before the expiration of the last of those meetings the Member has obtained the leave of the Speaker in writing or unless the House upon motion made without notice has granted him leave of absence, he shall vacate his seat under section 29 (3) (a) of the Constitution.”

In its efforts to force opposition MPs to come to Parliament, the government has tabled a bill that would allow the state to deduct monies from the salaries of MPs who, without excuse, absent themselves from meetings of the House of Assembly.

The bill, which has received its first reading, has been sent to a select committee of Parliament.