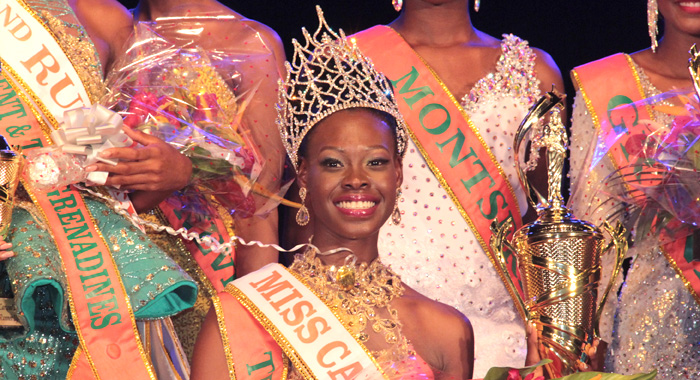 Nikianna Williams, the St. Vincent and the Grenadines delegate in Miss Carival 2016 was both gracious host and passionate competitor during the introductory segment of the regional pageant at Victoria Park Friday night.

“In exercising my royal duties, allow me to welcome you to the Miss Carival pageant and to the most tantalising weekend on the Vincentian calendar,” she said at the beginning of the pageant, hailed as the most prestigious in the English-speaking Caribbean.

“I am in the presence of royalties, as I am joined by nine stunning Caribbean queens, hailing from Anguilla in the north to Venezuela in the south. But don’t be mistaken, however, because this is where my role as hostess ends and the battle begins,” said Williams, who was crowned Miss St. Vincent and the Grenadines on June 4.

“Vincentian warriors, tell them we Vincy doh back down from nobody,” the 22-year-old beauty said, half speaking, half singing a line from Mason’s popular soca song, much to the delight of the home crowd.

But among the contestants was Miss Trinidad and Tobago, Djennicia Francis, who had come to the birthplace of her great-grandfather, Jonathan O’Garro.

“I am daring. I am excitement. I am that extra shot of adrenalin needed to liven up your night,” Francis, a petite and spritely 21-year-old, had warned as she brought “splendiferous greeting” to Victoria Park and local and regional audiences following the show via social media, cable television, and radio.

“I stand here tonight in one of my ancestral homes inviting each and every one of you to sit up and get excited because the show has just begun,” Francis had further declared.

At the end of the pageant, Williams would walk away with all the winnings in the “beauty” element of the show, while Francis and Miss Dominica, Tasia Floissac would dominate the “brain” segment, forcing Williams to settle for Second Runner-up.

On the way to winning the crown, Francis bagged the Interview segment of the show, in which many patrons agreed she was also a very strong contender in the talent segment, which went to Floissac.

The Trinidadian delegate also won the Miss Congeniality and Most Community Spirited awards, none of which contributed to her winning tally.

“I feel absolutely ecstatic. This is my very first regional pageant. In fact, it is my first time leaving Trinidad and Tobago at all, so to actually win is astonishing to me. I am so happy,” Francis told reporters after her crowning

She was reluctant to say that she was confident, ahead of the show, that she would win.

“To say I was confident that I was going to win would be being a bit cocky. I am confident and I did think that I was capable of winning but I kept thinking, ‘But the other girls are from other countries and their countries chose them, so clearly there would be heavy competition.’ So I expected there to be a serious competition. Admittedly, I was a bit nervous coming into this,” Francis told reporters.

Ahead of the show, she did not identify any one main challenger but saw each of the nine other delegates as having what was needed to clinch the title.

“I thought everyone would be a huge challenge because I am someone that pays attention to people and I know that each person has something different to bring to the table and that difference is what could have set them apart from the rest of us. So I saw everyone as heavy competition because I wasn’t sure what the judges would like, what the people would like. To me, it could have gone anyway.”

Miss Carival 2016, however, admitted that she was disappointed that she did not win the Talent segment of the show, as some patrons predicted that she would have.

“It would be wrong of me to say no I am not, but disappointment and thinking it wasn’t fair is (sic) two different things because the other delegates were excellent,” she told reporters.

“I sat in the back thinking talent is going to be a serious competition because I enjoyed everyone’s performance. So, yes, I am disappointed simply because — well I am human, I like to win things, but I think Miss Dominica did an excellent job. So congratulations.”

Through dramatization and song, Miss Dominica reminded the pageant that at different times in our lives challenges, heartbreak and tragedy are inevitable.

Her rendition of “Titanium” was intended to remind that on a personal or national level, “when we are brought to our lowest points, we must never give up”.

She wanted to convey to the audience that they can “find the internal strength to shed off their challengers and put on the armour of confidence and hope because there is always hope”.

Floissac demonstrated immense ability to control her voice in rendering a song that includes some very high notes.

On the other hand, Miss Trinidad and Tobago seemed a natural in reaching those high notes, in her rendition of “I Wanna Dance With Somebody”.

In the end, the panel of judges from across the region chose Miss Dominica as winner of the segment in which each delegate gave a good account of herself, which is often not the case in the talent segment of beauty pageants in SVG.

By the time Miss Trinidad and Tobago had completed her interview, it was clear that even with two contestants, Venezuela and SVG yet to be quizzed that they would have had to go above and beyond to win the category.

Francis had already distinguished herself as being head and shoulder above the other seven contestants who had completed their interviews.

In the question based on her biography, she was asked: “You are pursuing a degree in psychology. What have you identified as some of the causes of behavioural problems in young persons?”

“One of my favourite psychologists, Gardener, proposed a theory of multiple intelligences and he also mentioned that people in the western side of the world focus only on two types: linguistic and mathematical. The issue with that is that many children go around thinking that they aren’t intelligent. They think that they aren’t worthy, but it’s just that their intelligence isn’t being utilised, isn’t being celebrated. I genuinely believe that if our education system took in all different types of intelligences into consideration, our children would have more respect for themselves. They would feel more worthy, they would feel more loved and someone who loves themselves and feels like what they have to offer is something important to the world is not likely to get into crime, is not likely to fall into all the different issue that occur when you have a low self-esteem.”

Her second question was: “Would you support random drug testing in schools? Give us reasons for your answer.”

Francis responded: “It is exceptionally unfortunate that I have to say this, but I would support it. Our society right now, we have a lot of children in a lot of pain and they are going down the wrong path and doing a lot of wrong things and one of those things is taking drugs. And if we had random drug testing, then just maybe we could catch the ones that are going down the wrong road and help them. I don’t think it should be used just as a means of punishment. It should be to find out who are those children that need that help. And once we can do that, I honestly think that we can save our society and save our children, save our young adults, save so many lives. Thank you.”

In the Evening Wear category, Miss SVG’s winning gown was one of two Kimon Baptiste designs in the competition.

The gown, “Secrets of the Ocean”, had a top made with gold appliqués fused with sequence tulle intended to create the impression of the sun on the Caribbean’s sandy beaches.

The high neckline was reminiscent of the sun-kissed sand after the tide has receded, according to the description read at the show.

“The low cut at the back of the gown gives way to a bare back and reflects what we know about the deepest parts of the ocean.

“The overlay of the gown is made from teal sequined tulle and curved edges symbolic of crashing waves against the rocks, while the fullness signifies the vastness of the ocean with its unparalleled beauty, unforeseen danger and depths, which hold secrets yet to be discovered.”