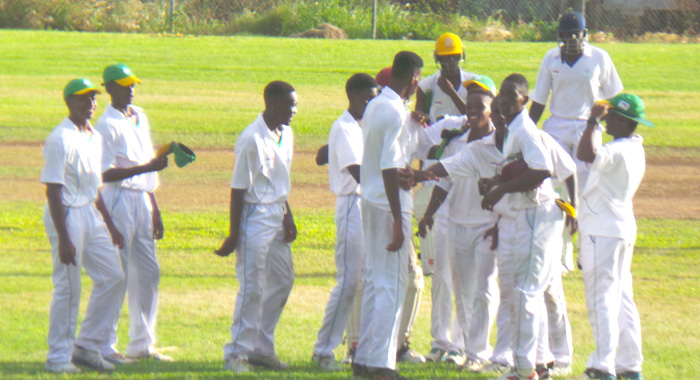 The SVG team savouring their victory.

Defending champions St. Vincent and the Grenadines go into the final round of matches in the 2016 WINLOTT Windward Islands Under-19 Cricket Tournament well poised to retain their title after putting together a food performance on Thursday against St. Lucia.

The host, behind the exploits of their spin twins, captain Othneil Lewis and Rasheed Fredericks, recorded a 94 run victory over the St. Lucians to go top of the standings.

The Vincentians moved to 18 points, 9 more than second placed Dominica after recording the first outright win in the 2016 tournament un the match at the Sion Hill Playing Field.

St. Lucia, who were set a target of 236 in 55 overs, were dismissed for 141, 10 minutes from the cut off time of 5:30 when Lewis trapped Kester  Charlemagne for 19, swinging across the line to spark wild celebration among the SVG players.

The St. Lucians, who are bottom of the standings, went out with obvious intentions of attempting the target with captain Christian Charlery joining Kimani Melius at the top of the order and the pair went about the bowling in adding 36 for the first wicket before the former was caught behind off Lewis for 8.

They were soon 37/2 when Melius 23 was caught off Fredericks at took tea at that stage.

The resumption saw a downturn in fortunes of the St. Lucians as they found the spin a problem on a pitch offering assistance and lost wickets steadily.

In the end, Shadrack Descartes, who was shifted down the order got 30 and appeared the more adept at dealing with the Vincentian spin arsenal.

SVG, which won the toss and batted on Wednesday’s opening day, were dismissed for 180 after recovering from 94/7 thanks to captain Lewis who got 74. Descartes took 4/22, Calender 2/18 and Eugene 2/39 for St. Lucia.

St. Lucia were then dismissed for 98 with Lewis taking 3/31 and Fredericks 2/21 with four batsmen going by the runout route.

Over at the main Arnos Vale Playing Field Dominica took first innings in their drawn match against Grenada.

In the final round starting today, SVG take on Grenada at the main Arnos Vale Playing Field while Dominica take on St. Lucia ay Arnos Vale 2.