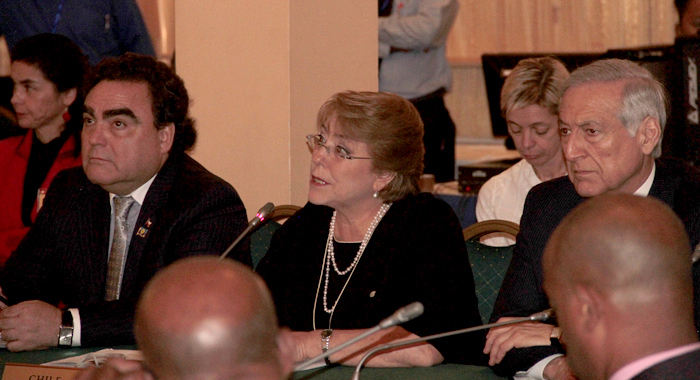 Chilean President, Michelle Bachelet, Tuesday called for greater cooperation between Latin America and the Caribbean saying it could only “bring us regional benefits”.

Bachelot, who met with Caribbean Community (CARICOM) leaders, said Latin America and the Caribbean are a core priority of her country’s foreign policy.

“In this regard, our relations with CARICOM plays an important role. We ensure that progressive integration and cooperation projects with countries and regional bodies in our region can make a difference when we seek to achieve a prosperous and inclusive future for our people…”

She said that a stronger and deeper relationship between CARICOM and Chile can only bring benefits to the two regions, adding, “the increase of regional trade is an imperative of our times and the most appropriate and feasible answer to the declining commodity prices, sectors such as tourism, education, energy, agriculture and fisheries, to mention just a few provide multiple opportunities for increasing our trade an investment flows”.

Bachelet said that for many years, Chile has been a recipient of international cooperation and it was an irreplaceable contribution to its development.

“Today, we see ourselves as having a dual role. We still have development gaps which require a little hand-out of the international community.

“Here, we are also committed to share our best practices with public policies that have helped us to grow, to deepen our democracy, to improve the quality of our public administration and to defeat poverty,” she added.

CARICOM Chairman, Roosevelt Skerrit, spoke of the strong relationship with Chile informing her that the small island developing states, including those in the Caribbean, were lobbying the international community to address the impacts of climate change.

Skerrit, who is Prime Minister of Dominica, noted that while the Caribbean bears the brunt of the impact of climate change, its contribution to the phenomenon was minimal.

“The Community over the past years has made a conscious effort to build relations with our partners in our hemisphere. It is not at the expense of our traditional partners by any stretch of the imagination, but Chile has been a partner to all of our countries bilaterally,” CARICOM Secretary General Irwin La Rocque said at the opening of the summit here Monday night.

2 replies on “Chile calls for stronger relationship with CARICOM”