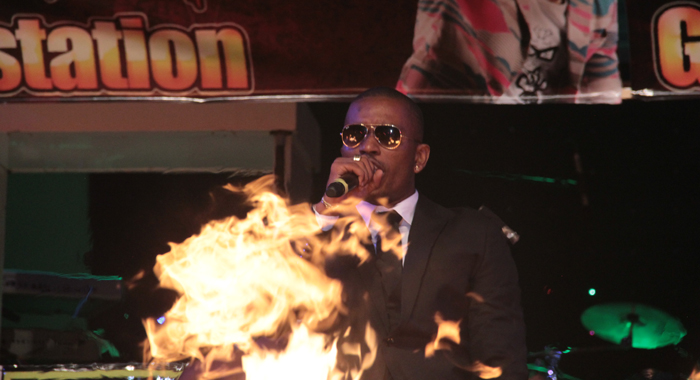 A scene from Hypa 4000’s performance of “No Behaviour”. (IWN photo)

Both the Ragga and Power Soca Monarch say they were “speechless” after victories in the competition Saturday night, which may have indicated a shift in the power dynamics in the art form in St. Vincent and the Grenadines.

Both titles were up for grabs after Skinny Fabulous, who bagged both crowns last year, followed through on an announcement then to stay out of the competition.

But after his convincing performance, Chewalee did not know what to say about his victory.

Chewalee was in disbelieve about his victory, which he secured with the song “Rumist”.

Chewalee praised his producer, Lester Iroha, for his help, describing him as “the number one producer”.

But after a night of competition and a long carnival season, Chiwalee felt it was time to make up with his family for the time spent focusing on the nation’s biggest festival.

Meanwhile, Hypa 4000 had high praise for Skinny Fabulous “because you done know how the thing set.

“He helped me through my performance right now. Big up Skinny Fabulous,” added Hypa, who won the crown with “No Behaviour”.

The artiste who won the Road March in 2015, said the Soca Monarch title “just a stepping stone in whatever I wanna receive because whatever I want to achieve, it bigger than just being soca monarch.

He said Skinny — who along with Fireman has dominated power soca in SVG over the last decade — helped “mentally mainly”.

4000’s presentation, showed some elements of Skinny’s trademark, including the theatrics.

The beginning of the performance was a video of a shortage of gasoline showed on the large screen.

The video then moved to a live projection of 4000’s entry into Victoria Park.

The presentation reminded some patrons of a presentation Skinny did some years ago, when he made a recording that showed him running from inside the nearby hospital to Victoria Park. The recording then switched to a live video of him entering the park.

Asked if Skinny had helped him with the theatrics for his presentation, 4000 told reporters:

“I wouldn’t say that, but, mentally, he helped us a lot, he gave us a lot of guidelines about what we should do,” 4000 said , but did not elaborate.

“I can’t leggo the secret recipe,” he said.

Asked about the idea for the song, which begin with the line “A bottle of sunset is we gas”, Hypa said, “It wasn’t even an idea.

“It was just me pushing myself to try to do something better than what I did previously, like in previous years, like last year. … always trying to be better than before.”

Hypa said his objective is to also win the Road March title, the winner of which is expected to be announced today, Wednesday.

He said he sees himself as the next Vincentian artiste to make it internationally.

“The next Skinny, the next Kevin Lyttle, the next Marlon Roudette,” Hypa 4000 said.

New artistes are rulers of soca in SVG