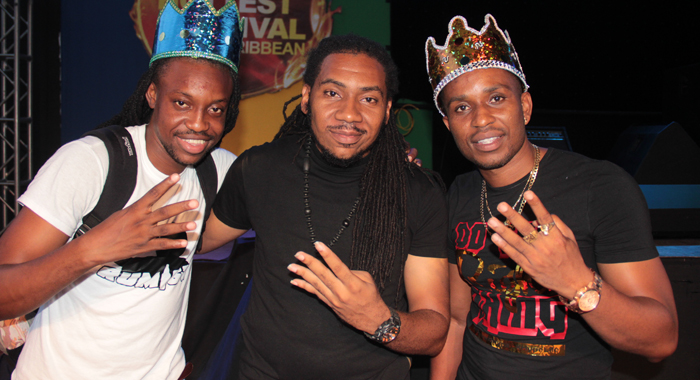 The music producer who arranged the music for the songs that won Ragga and Power Soca Monarch on Saturday says the victories are a vindication of his experiments with what was traditionally considered soca music.

The producer, Lester Iroha, said that he was “speechless” after Chiwalee Johnson won the Ragga Soca title singing “Rumist” and Shane “Hypa 4000” Husbands won the Power Soca crown with “No Behaviour”.

These victories were in addition to the 2015 Road March title that 4000 won singing “Dutty Dancing”, a song that Iroha also produced.

Iroha told reporters Sunday morning that he considered himself as having broken through the music industry even before the 2015 victory.

“It’s always good to see some recognition, some trophies and accolades added on to the hard work,” Iroha, however, said.

Iroha said “just creativity, not being afraid to experiment with different songs, different tones” distinguish his music from other producers’ music.

“I remember when I just started, a lot of the tones I used, people used to say those aren’t soca tones. But now, half of them are common, common within soca right now. So sometimes you can’t be afraid to push the boundaries,” Iroha said.

Iroha was born in Nigeria and grew up in St. Vincent and the Grenadines.

“Me being born in Nigeria, my musical background really came from my father. He was a music lover himself, so I guess it is just in the blood.”

He said his relationship with 4000 has gone beyond artiste-producer. “It is like a brotherly bond because we argue and we make up, just as if we are family, but at the end of the day we are both working toward the same common goal.”

4000’s presentation included the use of flame-throwing and pyrotechnics, which contrasted to the minimal incorporation of such technology by leading soca act, Delroy “Fireman” Hooper, a crowd favourite to win, who placed third.

Asked if soca monarch patrons and judges are more included to go for that kind of presentation, and, if so, what does it mean for the economics of soca monarch and new artistes emerging, Iroha said:

“Second to that, soca monarch in St. Vincent or even in the region has become more of a theatrical presentation than actually just going and perform or singing a song.

Hypa 4000 snagged the title after 2015 winner, Skinny Fabulous followed through on a promise to stay out of the competition.

Skinny then assisted 4000 with his presentation.

Skinny and Fireman have dominated the power soca monarch competition and the artform in SVG over the past decade.

Asked if he thinks that the soca landscape will have changed once and for all, if Skinny decides to stay out forever, Iroha said:

“What this shows, you can just look at this year, the level of music that came out and a good bit of the music — I am not knocking the old veterans, they always bring out good music, but a lot of people of years past didn’t have much faith in upcoming artistes.

“You always hear a talk like, ‘Oh, you have to pay your dues.’ But this year goes to show you that once you have good music, set a good plan and you have a good performance, you could achieve even the highest of accolades.”