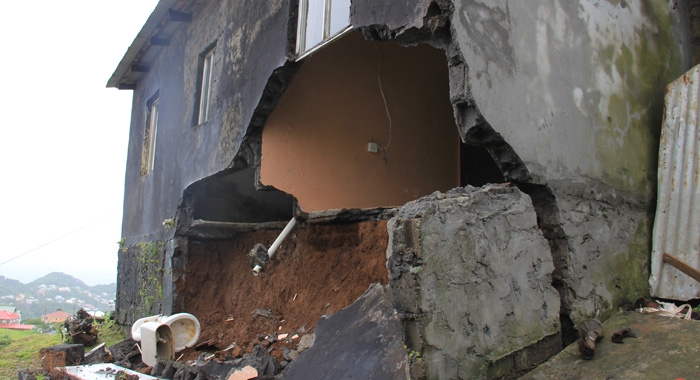 One bedroom and the bathroom of the house was damaged. (IWN photo)

A seven-member Queen’s Drive family needs help to repair their house, the foundations of which gave way amidst heavy rain Saturday night.

Mr. Gill is an auto mechanic and his wife a domestic.

One bedroom and the bathroom were damaged when the foundation of the building shifted around midnight Saturday.

Cracks have also appeared in some of the walls inside the house.

The couple says the house was first damaged by a tremor, which resulted in cracks some months ago.

However, the family did not receive any help from the government, although officials visited and inspected the property, they say.

Mrs. Gill told iWitness News that the foundation of the house was being undermined by rain.

“But there was a slight earthquake a couple months ago, maybe in late December-January, around there, so I figure that is why it … cracked,” she said.

Mr. Gill, however, said that the foundation of the house was weak, “more or less washing out” because of rain.

Mrs. Gill said her neighbour had called the Member of Parliament for the area, Cecil “Ces” McKie some months ago to see the house.

After repeated trips to NEMO, they sent an engineer who said “the project is very big, meaning it would cost a lot of money, and it’s not because of the slight shaking why the house move,” Mrs. Gill said.

She said the NEMO engineer told her that the house was damaged because of poor construction.

She said NEMO advised them to look for a place to rent, but all the places that they found were between EC$800 and EC$1,000 a month, which exceeded NEMO’s budget.

“This time, we definitely have to move because almost the whole side is gone,” she said, noting that the house is also a treat to other in the area.

The family remained in the house after the foundation gave way Saturday night.

They are appealing to the government for assistance to repair the house.