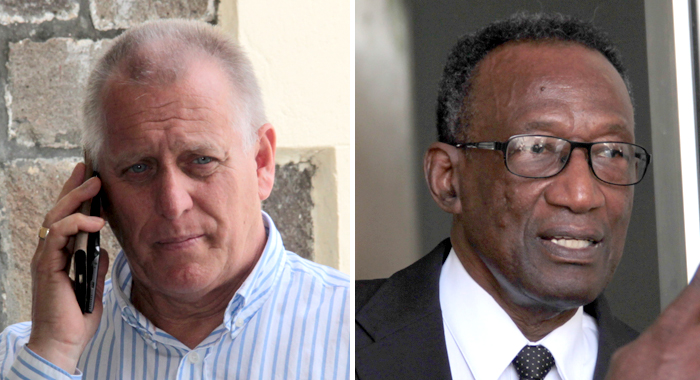 Leader of the Opposition Arnhim Eustace said Monday that the latest fiasco surrounding businessman Dave Ames is another indication of government “incompetence”.

Ames, a Britain-born naturalised Vincentian fled St. Vincent and the Grenadines in June after the Crown summoned him to court to answer eight tax evasion and theft charges.

Speaking on his weekly radio programme on Monday, Eustace said that Ames is now a fugitive.

But he said that in addition to the allegations that aims failed to pay the state value-added tax and pay-as-you-earn taxes amounting to some EC$7 million, he or his business owes a number of business persons in SVG.

Eustace said that he had written to   Buccament Bay Resort on behalf of a number of persons that the company owes.

Among these, he said, was a pineapple farmer that that resort had owed EC$1,500 for more than a year.

Eustace said the farmer was paid EC$500 after his letter.

He said that while it is true that workers at the resort have not been paid, this is also the case with businesses, adding, “A lot of questions arise.”

Eustace said there were allegations of bribery involving Ames and Prime Minister Ralph Gonsalves, but added that they were never substantiated although questions were raised.

He also noted that Minister of Works and General Secretary of the ruling Unity Labour Party (ULP), Sen. Julian Francis had said that the resort is “a child of the ULP administration” that must be protected and that the resort went hand-in-hand with the Argyle International Airport project.

The airport has missed deadlines annually since 2011. It will also miss the July 2016 deadline, Gonsalves told a press conference on Monday.

“The leader of the ULP, while he is a sweet talker, the fact remains that he can’t deliver the goods,” Eustace said.

He said the tourism and banana industries are shrinking, adding that there hasn’t been any export of the fruit to Europe from SVG for some time.

Eustace said that his New Democratic Party (NDP) will, in a few days, issue a statement on the banana industry.

“Nothing is going well,” he said, adding that while the government talks of a 2 per cent projected growth in the economy this year, the governor of the Eastern Caribbean Central Bank had told the NDP that the projection is actually 0.6 per cent.

“I say to people it has been a long time but this country will be turned around by this same New Democratic Party. You will see growth, you will see development, you will see progress. This is what you will see,” Eustace said.

The ULP has been in office since March 2001. It secured a fourth consecutive term in office in the December 2015 general elections by winning eight of the 15 seats. The remaining seven went tot eh NDP in a repeat of the 2010 elections results.