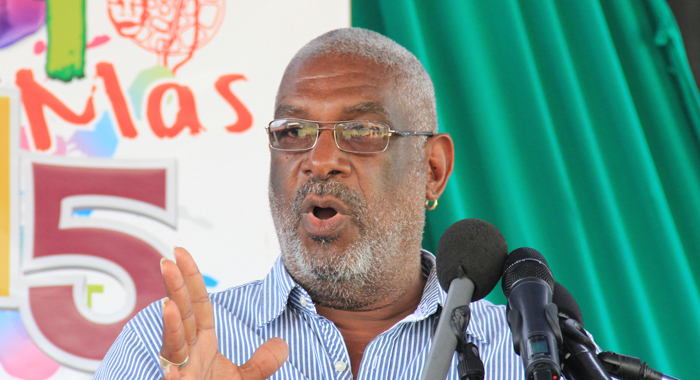 Chair of the Carnival Development Corporation (CDC), Dennis Ambrose on Tuesday responded to private promoters who continue to criticise the CDC’s organisation of Vincy Mas even as the benefit from the CDC’s efforts.

“The CDC has nurtured the proposal to integrate and embrace private events. But, let us understand that these will have to be firmly structured,” Ambrose told a post-Vincy Mas 2016 press briefing in Kingstown.

“While the CDC has agreed to work with the private promoters, we must understand that the CDC cannot simply lie down and play dead so that private events can roll over and smother the national events,” he said.

Ambrose said that the work of the CDC, the comments of Vincy Mas and the sponsors set the stage and climate of Vincy Mas.

“While the private promoters get to piggy-back on the people-volume created by the efforts of the CDC, it would be ludicrous for the CDC to simply give way to such organisers,” he said.

“It is realised that over time, greed has given way to good graces, such that one promoter wants to have five piggy-back events to ride on the back of the CDC programme, while making absolutely no investment into the national festival that is set to benefit the country’s economy,” Ambrose said but did not name the promoter.

The CDC chief said the promoter “continues to bad-talk the festival and the CDC, about what is ‘boring”, while stuffing his own pocket at the expense of the CDC, its components and the sponsors.

“He has yet to come forward to the CDC with a contributory, so-called ‘dynamic’ idea to help the national festival to grow. That’s what good nationals do,” Ambrose said.

“I challenge any of the private promoters to host their events in the month of March, or September or November. Let me see you do that! I rest my case and will wait,” Ambrose said.

He also announced at the press conference that the prize giving ceremony for Vincy Mas 2016 should be held by September.

“… the CDC has to consolidate its financial responsibilities and commitments, and hopefully, this can be done by the first week of September, in which case, prize- giving will follow by mid-September. So kindly bear with us,” Ambrose said.

The CDC chair said that Vincy Mas 2016 was “overall a positive one.

“And in spite of the few drawbacks, I feel it was a good one,” he said.

Ambrose said that the festival was not without its challenges some of which the CDC could not fix — “like the inclemency of the weather, which teased us as to whether we can or should proceed or defer a particular Show.

“There were times in the past when the CDC was forced to defer an event — but this year, we were more fortunate and nothing was there to stop the carnival,” he said.