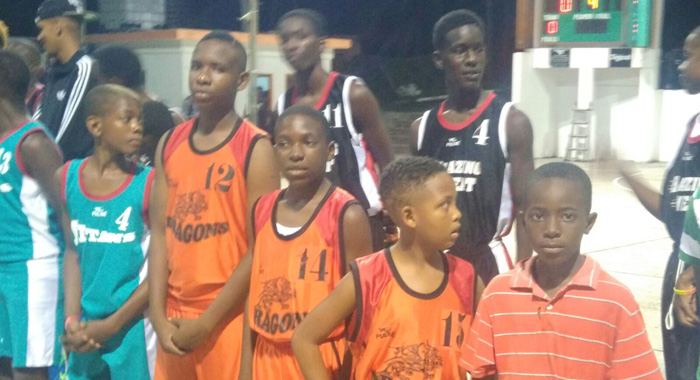 Fans turned out in numbers, despite the inclement weather, to witness the opening ceremony and the march past of teams.

The tournament features 15 teams in three divisions, namely the Under-16 Division, Second Division and First Division.  The Bequia tournament has been running for 18 consecutive summers during the months of July and August, and opens every year by tradition on the Saturday following Vincy Mas.

Games are scheduled to be played every Wednesday, Saturday, and Sunday nights from July 9 to Aug. 28, concluding before the opening of the new school year.

Following the march of the teams, President of the Bequia Association, Sabrina Mitchell, who is also on the Executive body of FIBA and Caribbean Basketball, and a sports ambassador, welcomed all patrons.

Mitchell appealed to the players and the community to take care of the facility and refrain from vandalising it, as it is there for the befit of all of Bequia.

She spoke with great pride about the hard work, dedication and collective effort of many persons who volunteer their time to the event for the seven weeks of intense competition.

She spoke of the importance of the event, whose reach goes far beyond the game, and is an integral part of life in Bequia in the summer, being so well established in the social calendar.

Mitchell made a special appeal to the Minister of Sports and Culture in attendance, Cecil Mckie, for the Government of SVG to secure funding for new gates for the playing field, as the ones currently there are rusted, broken, falling off and no longer function.

Mitchell thanked Government electrical inspector Jack, and electrician Alvin James, as well as Les Malcolm, station supervisor of VINLEC in Bequia for their stellar efforts to address some safety issues, which were well resolved.

She expressed gratitude to the St. Vincent Brewery and sponsor Vita Malt for their continued support of the event, as well as the Bank of SVG, and Frangipani Hotel, and the many small businesses in Bequia who give assistance.
Vice President of the SVG Federation Karel Bramble spoke of the importance of the Bequia Tournament and the tangible results the event is producing with the Bequia team winning the Secondary School Tournament.

He spoke of the 3×3 modality of basketball, a simple street version of the game with 5 players, which FIBA has recently launched, and which the Federation is now developing in SVG.

He spoke of the opportunities this can create for all players in SVG. He congratulated the Bequia Association on their 18 years. Parliamentary representative for the Northern Grenadines, Godwin Friday spoke as well, encouraging the players to play fair, and to respect the organisers of the event, as well as to take care of the facility.

He urged the older players to be more serious about the game and to set an example for the many young kids playing to ensure the sustainability of basketball in Bequia for many years to come.

Friday mentioned that basketball is well established in Bequia and persons look forward every year to the summer and the sport. He urged the Minister to get a cover for the bleachers, which are exposed to the elements, as many fans leave after a shower of rain.

He also congratulated Mitchell and her team of organisers for the continued work they do.

Mckie concluded the remarks of the evening, joining the other speakers giving kudos for 18 years of basketball. He spoke of his pleasure to be in attendance to ensure his support. He encouraged the Bequia Association, as well as the National Federation to develop a five-year plan for the development of the game to submit to him, so that the Government can properly address the needs of the community in terms of sports development.

McKie congratulated the Bequia players who were selected on the Windwards team, and encouraged others to play hard to ensure they are represented nationally. He wished all a successful event.

The opening concluded with a second division fixtured game as well as a First Division exhibition game.