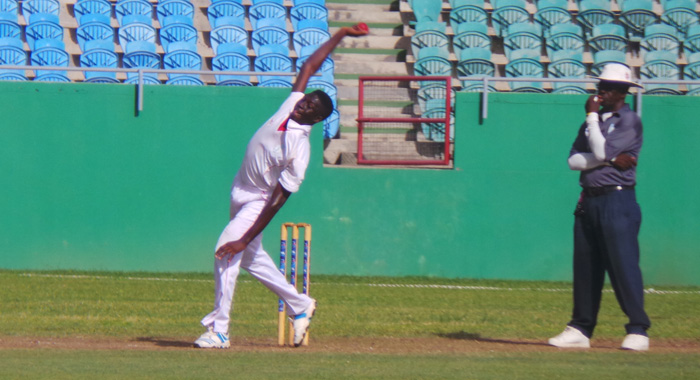 Cricket officials and local spectators have expressed concerns over the number of bowlers in the just concluded Windward Islands Under 19 tournament with suspect actions.

The questions over these bowlers’ actions were raised by way of whispers by coaches, past players and administrators over the six days of competition with matches at the Arnos Vale and Sion Hill Playing Fields.

Whispering, however, was not the case with spectators, who bellowed at the top of their voice “no ball” and, at the same decibel, urged or demanded the umpires to take action. The men in the middle though saw no reason to take the suggested action even as one bowler worked up a head of steam against SVG with pace that many believed belied his size and apparent strength.

That bowler, despite all the questions about his action, was the first announced when the Windwards team was named amid mutterings and looks of amazement from spectators and unbridled embarrassment from officials.

In fact, former Combined Islands and Windwards offspinner, Stanley Hinds who had openly criticised the transgressors during the tournament, could be heard blurting out a sound of dismay, as he listened to the names. The reaction from those gathered for the closing ceremony was the same as the bowlers whose action was seen as questionable were named.

SVG coach, Irvin Warrican, who recently attended a WICB coaching course, where detecting illegal bowling action was among the things discussed, said that the authorities need to do more to identify these bowlers at a very early age.

“How can you have these bowlers playing Under 13, Under 15, Under 17 and now Under 19 and no one can see something wrong with their action? Their home association had to be sleeping,” said Warrican, who was named manager of the Windwards U19 team.

Dominica’s Shane Shillingford, a tall offspinner who played a number of test matches for the West Indies, has been barred from bowling by the ICC and sent for remedial work on his action on two occasions, while SVG’s Ray Jordan, who represented the West Indies at the ICC U19 World Cup in 2012, was also barred from bowling pending remedial work, with Dominica and Windwards seamer Mervin Mathew also under the spotlight. All three have been part of regional tournaments.

The former Territorial Development Officer (TDO) for the Windwards disclosed that there are a few bowlers currently on the local scene some of whom have gone on to play regionally whose action contravenes the ICC regulations of the 15 degrees latitude. He said that SVG Cricket Association will have to address this matter as soon as possible.

Warrican said that while it is difficult to pick up the action with the naked eye at times, if someone is seen to be bowling a lot faster for his age and size, closer attention should be paid to that player. He said the authorities must also invest in good equipment to assist in this area.

CEO of the Windward Islands Cricket Board, Lennox John said while questions were raised over the action of some bowlers, no report had come to the Board from the umpires regarding this. John said that based on the comments he had heard, he raised it with the selectors who felt that in the absence of any adverse reports that they should select the players.

Warrican believes that even though the Windwards players are taking part in a six-day camp ahead of the West Indies tournament here, it would be near impossible to work with any of those bowlers during that time to bring about any serious change to their action. He is of the view that selecting them without serious remedial work can only invariably lead to embarrassment in the end for the player.

While in the past umpires were able to call a player for what they deemed as an illegal bowling action, the ICC has suggested that umpires now lodge reports on the action of the bowlers to match referees, if they are available or boards/associations.