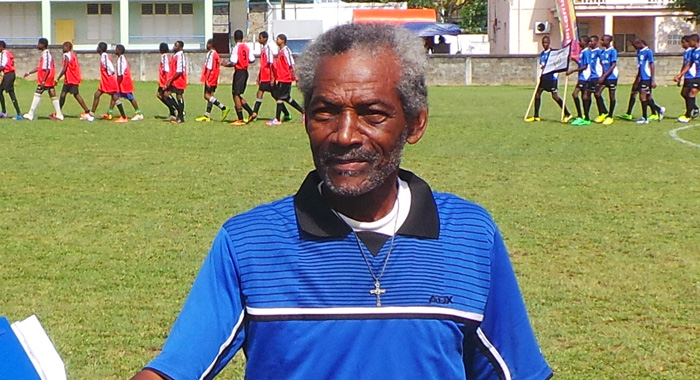 Fred Trimmingham had a particular approach toward football.

“None ah dem ah come to mi wid ball bungling up between dem leg to say dem ah go beats me. Is either de ball or dey ankle,” he would say.

This feisty disposition and his “never say die attitude” earned him the nickname “Ole Soldier” in the football fraternity.

Trimmingham died last weekend after a brief illness at the age of 76.

He was a defender/midfielder who stood just over five feet and was known for his robust tackling and his ability to assess passage of play.

He represented St. Vincent and the Grenadines at both football and cricket and is among an elite group of players who wore the national colours in those two sports during the same period.

This feat was matched in the same era by Lennox John, Mike Findlay, Colville Browne, Stanley Hinds and the late Carl Glasgow and Douglas Cambridge.

Trimmingham — also nicknamed “Garrincha” after the famed Brazilian midfielder with two similar “knocked knees” — represented the highly skilled Notre Dames unit at the local level alongside the folkloric, mercurial trailblazers as Norbert Hall, Ruddy Boucher, Jeff Bailey and the duo of “Zupang” and “Baps” Jones. He also played with them at the national level as well as with the dynamic pair of Guy and Raultie Lowe.

Trimmingham later left to form the Pastures Club, which made its debut in the 1973 season at the Victoria in the Soccerama — the curtain-raiser to the season at which the football motto “Soccer the Game of De People” was launched by the announcer for the afternoon, the loquacious Basil “Bung” Cato.

The occasion proved an inauspicious one for Pastures amid fading light and a slippery outfield, where they were mauled by the more experienced Dames outfit.

Pastures, though, with Trimmingham playing a pivotal role, were to put that setback behind them, and over the years, with the experienced Jim Ollivierre, the skilful Tyrone “Fleety” Grant, the hardworking “Bincanse” Soso the and the ruthless “Dom Dom” Jones, rose to the top tier of the local sport.

The club, for many of those years, carried the name Turtle Wax Pastures through a brand of cleaning products sold by Major St. Clair Leacock.

Remembering the man, Leacock who has been asked by the family to do a tribute at the funeral on Thursday, said that Trimmingham was undoubtedly “one of the country’s best ball men.

“Fred was a gifted sportsman and it just came naturally to him to play the sports in which he got involved.

“And not only was his unwavering commitment to ‘back his shirt and roll up his sleeve’ — in other words he was always prepared to work hard at what he was doing,” said Leacock, who was president of the SVGFF for a number of years.

He said that Trimmingham was unfortunate to have been born in an era and in St. Vincent and the Grenadines when he did, since it was difficult to have gained the opportunities to display his talent in front of a larger audience which would have brought fame and fortune.

The match-savvy player was known for booting the ball out of the Victoria Park as a means of holding onto a lead in a match when time was running out –much to the annoyance of officials and opponents.

He served as national senior coach for a number of years.

Two of his sons — Corneilus and Marlon Huggins — also represented SVG at the senior with Cornelius being the current senior men’s coach.

In the area of cricket, Trimmingham, as an offspinner, represented SVG in the late 1960’s and early 1970’s.

On the local scene, he represented Sheffield, Radcliffe, and Victors 1– which he captained.

SVGFF President, Venold Coombs said Trimmingham was one of the players who gave back a lot to the sport by helping to coach youngsters whenever he got the opportunity to do so.

“Fred just loved sports and in the past, you would have gone to the Grammar School Playing Field and see him with a group of youngsters until it dark teaching them the game,” Coombs said.

Coombs, who is also the long-serving manager of Victors 1, said that Trimmingham allowed little to pass by him whether on the field or off it.

“Fred was never one willing to back down from whatever challenge and regardless of the consequences at times,” Coombs said.

And evidence of this was related by Guy Lowe as he remembered an incident while the team was in Dominica in 1973 and came under attack from the home supporters, as part of the fallout from the murder of SVG’s acting Attorney General, Cecil Rawle, a Dominican who was shot dead in St. Vincent a few months earlier.

Lowe said that they had played the home team in front of a hostile crowd and at the completion of the match the crowd became violent, forcing the players to run for their lives.

However, Trimmingham refused to take such measures.

“The man stood up and started exchanging hand with the crowd and a policeman had to come and dragged him to a nearby house for safety. Fred was something else,” Lowe reminisced with a big grin.

Lowe said that as a player he had great respect Trimmingham for his knowledge of the game and how hard he played it.

He recounted an occasion when, despite being on the receiving end of some rough play at the hands of Trimmingham, he was still shown a red card.

“He was on my case every time I got that ball. It was kick, elbow, everything just to rattle me so I locked his neck and he called out to the ref who saw me holding him and threw me off.”

Lowe said Trimmingham was a good team player and was always willing to discuss sports with old and young alike at every opportunity and was prepared to sit around long hours after matches do discuss positives and negatives from the outcome.

Another former SVGFF President, Adrian Fraser said: “As a member and captain of the Grammar School cricket and football teams, I played on many occasions against Fred. My most memorable encounter was playing on the same cricket team with him for national trials.

“He turned the ball big and I was put to field at leg slip where I took three catches. Batsmen had difficulty dealing with his turn.

“I also played with him on the concrete in front of the Richmond Hill school on afternoons after school. He was an outstanding footballer and cricketer”.

Reports say that Trimmingham who was of the NLA team in Breakaway Masters Firms Football Tournament was set to be one of two honourees at the opening ceremony of the 2016 edition at the Grammar School Playing Field, Aug. 6.

Trimmingham’s death brings to four the number of past national footballers who have died over the last year or so, Sydney Mandeville, Tyrone “Tweety” Spence, and Keith “Slick” Bonadie.