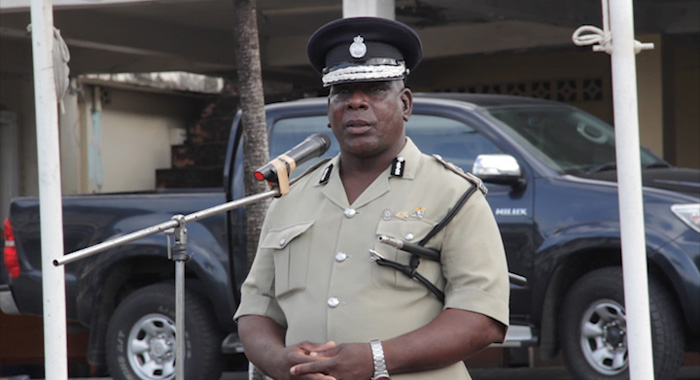 After 35 years of national service as a police officer, Commissioner of Police Charles will do it all over again, with one exception.

“That episode at Sion Hill during that political rally, in hindsight, I would not have done that. We all are humans and make mistakes. I learnt from my mistake,” Charles told his last Commissioner’s Parade at the Old Montrose Police Station Thursday morning.

He will on Aug. 2 proceed on pre-retirement leave before formally exiting the police force later this year.

Charles urged his successors to learn from his mistake — an incident in which he donned the colours of the ruling Unity Labour Party and displayed the party’s “Four Inna Row” hand sign during an election rally last year.

“It is with a heavy heart that I am addressing you this morning, but God is good. Thirty-five years is not 35 days. Through it all, I have to thank you all, but, first, I have to thank Almighty God for bringing me thus far,” Charles said at the beginning of his address to the troops.

He told his charges that he is one of just three persons remaining from the 20 who were trained as police officers in that batch 35 years ago.

The other two are Superintendent Jackson and ASP Humphrey.

“That started a bond. Since then, we are like brothers,” he said. Charles, who was appointed Commissioner of Police in 2013, said he has only been assigned to three units of the Royal St. Vincent and the Grenadines Police Force (RSVGPF), namely the Special Services Unit (SSU), the Drug Squad and the Coast Guard.

He said that while he never worked at the Coast Guard, in the early days he did tourist duties on the seas, adding that this was the beginning of his bond with the Coast Guard even as he also developed a love for the Police Band.

“I asked former Commissioners for me to join the band but there are two instruments I was able to play. The band didn’t have them and I couldn’t make the band. Number one, they didn’t want a whistler; number two, they didn’t want anybody to play the fool,” he said to chuckles.

Charles told the police officers that he sees himself as a part of each department of the RSVGPF and credited now deceased former superintendent, Leroy Latchman for moulding many of the persons now in the Officers Corps of the Police Force.

He said that some mornings Latchman would drive into the yard of the Old Montrose Police Station, look up to the mountains and tell the sergeant to put the SSU officers on standby because he had a feeling that something would happen that day.

Charles said that when he joined the Police Force he was shy and couldn’t speak in front of a crowd. But every morning before going on leave, Latchman would select someone at random to give a “lecture”.

“’Crocus! Give us a lecture on AIDS!’” he said, mimicking the deceased senior police officer, who referred to him by his nickname.

“You had to get up and do it,” Charles said.

“That is how it all started. We were constables but Mr. Latchman used to have us on the parade square teaching us how to use the sword.”

He said that one of his greatest achievements outside of St. Vincent and the Grenadines was when he served as an instructor during the Tradewinds military exercise in Puerto Rico in 1990.

Charles was a constable in the RSVGPF but a sergeant with the Regional Security System.

“And I was conducting the range in Puerto Rico and who I see marching up in my range? Superintendent Latchman. Brothers and sisters, I let him know who was boss. After the session, I can see his face. [He was] so proud, so proud,” Charles reminisced.

The second leg for Tradewinds was in SVG and the person with overall command was a captain from the Royal Marine, and Superintendent Scott was in charge in SVG.

Charles said that the final parade was at the Fire Department at Arnos Vale and Scott unexpectedly instructed him to come front and centre.

“See short Sergeant Charles moved front and centre and dismissed Tradewinds 1990. Those were proud moments for me in St. Vincent and the Grenadines,” he said.

But the career policeman had yet an unfulfilled aspiration: to command an Independence Parade, an opportunity that he got in 2009.

Charles said that when he was appointed Commissioner of Police in 2013, he “accepted it with both hands.

“Today, I want to thank the commissioners, deputies and all ranks for the support they have given me. I couldn’t have done it without the officers and more so, the rank and file of this wonderful organisation. Thank you very much. I did my best. I did what I had to do. And if I had to do it all over again, I will do it the same way, with one exception,” he said and went on to express regrets about the episode at the political rally.

Charles was also thankful to the general public, saying their support was “overwhelming”.

“The media. When I became Commissioner, I stated that I’ll have an open door policy to the media and I am glad I did because that relationship helped us to foster a great relationship with the general population of St. Vincent and the Grenadines.

“Every reporter, and I mean every reporter in St. Vincent and the Grenadines has my personal cell number… and I urge persons who will be taking over to have similar approaches…”

But Charles also made it clear that his officers have not seen the last of him at the national level.

“This chapter in my book is about to be closed but another book will be opened, because life continues.

“… For there consecutive years, the Police Force has ruled the calypso arena in St. Vincent and the Grenadines. Man Zangie, I can tell you, come next year, you will have competition because the Crocus wants that crown.”

Charles addressed the issue of promotion, saying that along with transfers, it is one of the hardest decisions that the leadership of the Police Force has to make.

“We sit. As old people say, we rub heads … We will not be able to please everybody but I don’t worry. Former high court judge Wesley James, in a conversation with him, we were talking about promotion and how promotions are done in St. Vincent and the Grenadines, and I told him about the difficulties. He said, ‘Commissioner, don’t worry. India has over a billion people and they have to pick 15 persons for the cricket team. That is a challenge. You don’t have a challenge.’

“Ladies and gentlemen, thank you very much and may God continue to bless our wonderful nation and the Royal St. Vincent and the Grenadines Police Force,” Charles said.

John is expected to be promoted to police chief when Hadaway retires next year.