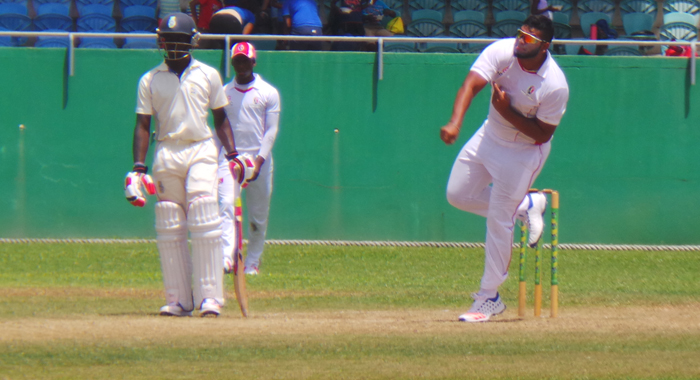 Barbados were dismissed for 194 after resuming the final day on 171 for six, with off-spinner Jonathan Bootan finishing with 5 for 53.

The Leeward Islands and Jamaica claimed outright victories while Barbados put on a fighting batting display to keep Trinidad at bay in the opening round of matches in the three-day Regional Under-19 Championship in St. Vincent.

Jamaica made light work of defending champions, Guyana disposing them by 39 runs inside two days at the rural Park Hill Playing Field thanks to an impressive performance by Jeavor Royal who finished with a 10-wicket match haul.

Guyana, set 152 for victory, were dismissed for 112 in their second innings, as the Jamaicans made an early bid for the title.

West Indies U19 World Cup star Keemo Paul top-scored with 35 as Javelle Glenn grabbed five for 27 and Royal picked up for four 23.

Royal, who had earlier taken 6 for 29 in Guyana’s first innings of 121, finished with match figures of ten for 52.

In their attempt at getting the target, Guyana lost Raymond Perez cheaply for 4 with the score on 13 but Joshua Persaud (28) and Ronaldo Renee (24) added 34 for the second wicket.

Persaud faced 52 balls and struck 3 fours and a six while Renee faced 61 balls and counted 3 fours. Glenn accounted for both men as Guyana slipped to 72/4.

However, Paul produced a cameo knock, banging 2 fours and 3 sixes off just 21 balls, as he put on 32 for the fifth wicket with Trevor Persaud (12).

Paul became Glenn’s third wicket at 104/5 to trigger a seismic crusade as 6 wickets fell for 8 runs.

Jamaica, who led by 22 runs on first innings, had been earlier dismissed cheaply for 129 in their second innings with Royal top-scoring with 44 adorned with 4 fours and 2 sixes off 46 balls.

Royal arrived at the crease with the innings in tatters at 50 for 6 and added 39 for the seventh wicket with Rashjni Roye (12), and 40 for the eighth with Andre Bailey (18).

In the other outright result left-handed opener Ross Powell stroked a superb, unbeaten half-century to help Leeward Islands notch up a come-from-behind 6-wicket over the Windward Islands at the Sion Hill Playing Field.

Set 169 for victory the Leewards took initiative by beginning the run chase in emphatic fashion with Powell (85*) and fellow opener Tyrone William (48) adding 90 for the first wicket as they easily dealt with the Windwards spinners. The Windwards also did not help their cause by flooring a number of chances.

Powell faced 157 balls and found the ropes six times and added 3 sixes while Williams struck 4 fours and 2 sixes in his 61-ball innings.

His dismissal triggered a mini slide as the Leewards lost 3 wickets for 13 runs as left-arm spinner Rasheed Fredericks (3/50) also accounted for Kofi James (6) and Karima Gore (0) in the same over with the total on 103.

However, Powell remained steady, posting a further 37 for the fourth wicket with Cameron Pennyfeather who made 19 off 32 balls with 3 fours and a further 31-run for the fifth wicket with Jaeel Clarke (10) to see the Leewards home.

Earlier, the Windwards lost their last 3 wickets for 10 runs after resuming the day on 153 for 7 in their second innings — 158 runs ahead.

Over at the main Arnos Vale Playing Field fans were shown the silhouette of a Constellation on the horizon, with the performance of Barbadian, allrounder, Leniko Boucher and Trinidad’s captain Kristan Kallicharan.

Boucher stoked a compelling century to help his team repel TnT’s victory charge after they were forced to follow on 177 runs behind. He had also picked up a “fiver” when Trinidad batted-becoming the first player at the U19 level to take 5 wickets and score a century in the same match at the Arnos Vale Playing Field. .

Barbados ended the final day on 225 for 5, with the right-handed Boucher leading the fightback with an excellent 119.

All told, Boucher faced 224 balls and batted 332 minutes and counted 11 fours and one six-a hook over square-leg off the pacey Jarlanie Seales. He looked assured against the Trinidad pace/spin attack with a straight broad bat in defence and a wide array of shots when runscoring opportunities were presented.

He brought up his century with an authoritative flick over midwicket much to the delight of his teammates and coaching staff. He also played an audacious steer to thirdman off a yorker from Searles.

“I came here with the intention of scoring a century in the first match and I am happy I was able to achieve that, ’ Boucher who made 20 in the first innings told IWN after the match.

Boucher who said this is his final year at the U19 level indicated that he wanted to make a good impression and was looking to help his team win the three-day phase of the competition and in the process get the most runs or tournament MVP.

Barbados who in the first innings suffered from the lack of significant partnerships batted around Boucher for most of the innings before he had his stumps disturbed –being the fifth wicket to fall — late in the day with a draw the inevitable outcome.

He posted 41 for the first wicket with first innings top-scorer Shian Brathwaite (15) and added a further 38 for the second wicket with Yvan Grant (39).

Boucher then spearheaded a key third wicket stand of 53 with Nicholas Kirton (14) and put on another 39 for the fourth wicket with Khalil Herbert (9).

The partnership with Herbert all but made the game safe for Barbados as it nearly erased the deficit but Boucher kept going, and his 44-run stand for the fifth wicket with Deswin Currency (18), completed a day of frustration for the Trinidadians. Fast bowler Jarlanie Seales led T&T’s attack with two for 32.

Earlier, Barbados were dismissed for 194 after resuming the final day on 171 for six, with off-spinner Jonathan Bootan finishing with five for 53 and left-arm spinner Bryan Boodram taking three for 43.

Trinidad and Tobago, who lost a wicket without a run on the board made 371 in their first innings with Kallicharan who batted at number four, compiling an impressive 110. Let off very early in his innings, the TnT captain made the Bajans pay with a number of sublime shots on both sides of the wicket while scoring at a healthy rate.

Bryan Boodram 88, Cephas Cooper 59 and Dejourn Charles 51 all chipped in as Boucher grabbed 5/66 with his lively medium pace.

“It was really hard work because it was a batsman’s wicket and you just had to be patient and let the batsmen make the mistake,” Boucher explained.

The tournament resumes on Sunday (today) after Saturday’ rest day with Guyana meeting Leeward Islands at Arnos Vale; Trinidad & Tobago vs Windward Islands at Park Hill and Jamaica vs Barbados at Sion Hill.