Baton of Honour passes to new Commissioner of Police 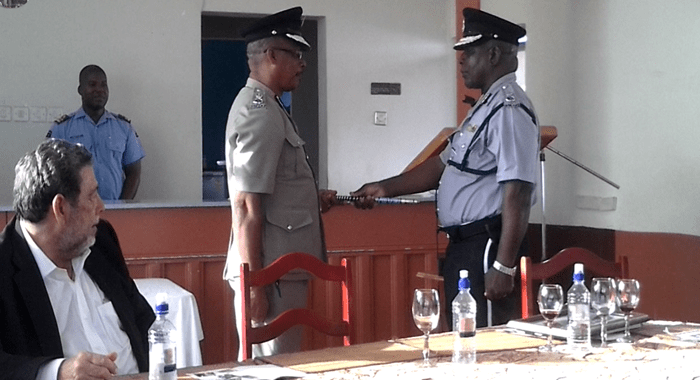 The baton of honour has been passed to a new commissioner of police, Renold Hadaway.

On Tuesday evening, Michael Charles, who served as Commissioner of Police from 2013 to 2016, handed the reins of leadership of the Royal St. Vincent and the Grenadines Police Force over to Hadaway at a retirement ceremony held for Charles at the Police Canteen, Kingstown.

Several dignitaries including Prime Minister Ralph Gonsalves, the Minister of National Security, were in attendance.

Gonsalves praised Charles for his tenure and described him as a patriotic Vincentian. He also said an official ceremony will be held soon to recognise Charles.

Hadaway, delivering remarks, said Charles is being honoured for 35 “hard years” of public service. He lauded Charles for establishing a good relationship with the public and described it as one of Charles’ strengths.

“He (Charles) has made the organisation a better organisation. We cannot operate as an organisation in a vacuum,” Hadaway said as he spoke of building bridges with the public in the fight against crime.

Hadaway promised that, like Charles, he will also have a good relationship with the public. He said on his very first day he accepted visits from some 35 persons of all walks of life who had visited his office to wish him well in his new capacity of Commissioner of Police.

Jones-Morgan said Charles was always a pleasant person and her own success as Attorney General and that of the judicial staff came about because of Charles’ contribution.

Meanwhile, Justice Cottle said: “This Commissioner of Police had always gone above and beyond to ensure the judicial staff officials are taken care of. He was quietly efficient. As the Bible says ‘well done thou good and faithful servant.’”

Hadaway’s tenure to act as Commissioner of Police began on Aug. 1.