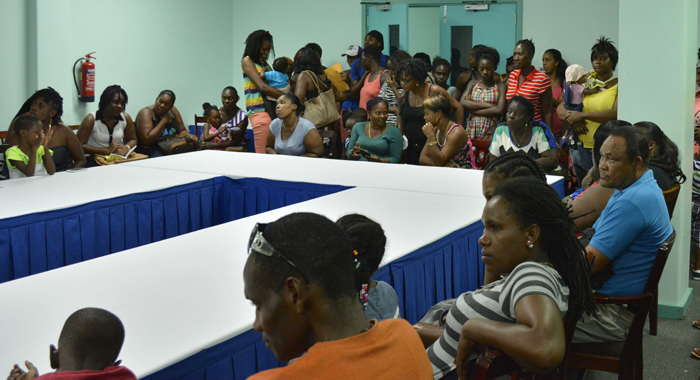 Some of the persons at the launch last week. (Photo: API)

The Adopt a Classroom programme, the first of a series of initiatives to be undertaken by the Zero Hunger Trust Fund, was launched last week.

The programme offers enhanced educational achievement, training and skill development of parents where necessary, health and wellness for both parent and child and transformation into self-sufficient and self-sustaining citizens.

A symbolic hand-over of cash grants was held at the Ministry of Foreign Affairs last week.

Director of Planning, Laura Anthony-Browne explained that late last year St. Vincent and the Grenadines joined the rest of the world in signing on to the sustainable development goals.

The first of these goals is the eradication of poverty and hunger. She said that following the legislative establishment of a board of directors, the Zero Hunger Trust Fund immediately set to work to start to design programmes to achieve its mandate to eradicate hunger in SVG.

She said that based on available data, it was noted that there was a direct link between poverty and hunger and also in some communities where there was a significant level of poverty the school attendance of children was not as it ought to be.

Some 190 children from primary schools in the areas of Chateaubelair, Fancy, Fair Hall, Barrouallie and Mayreau will benefit from this programme.

These schools were selected based on the last conducted country poverty assessment.

The parents received a cash grant of EC$260 with an additional EC$20 given as reimbursement for transportation.

This programme also differs in terms of how the assistance is being provided.

“We have decided to be a little bold and instead of giving you all handouts like a voucher, we have decided to empower you a bit by providing you with the actual cash, so that you can go yourselves into the stores and purchase the supplies,” Anthony-Browne explained.

She said she believed that providing the money directly to the parents would immediately assist with alleviating conditions of poverty. She noted that support would be also given in this regard with suggestions being made as to what items should be purchased.

The programme will be monitored very closely with an expectation of seeing significant changes. A second presentation will be done soon on the grenadine island of Mayreau.

Minister of Economic Planning, Camillo Gonsalves said the day was a happy one for his ministry as it was able to roll out the “Adopt a Classroom” programme

Gonsalves said he wanted to remind people of Prime Minister Ralph Gonsalves’ promise during the election campaign of his plans to eradicate hunger by the year 2020 and to ensure that no Vincentian goes to bed hungry at nights.

He stated that because of that promise, Cabinet took a decision to establish the Zero Hunger Trust Fund, which will design programmes to meet this goal.

“And this trust fund that we created and we passed a law to create it, and there is a board, we created this body that is going to spearhead this effort in St. Vincent and the Grenadines to make sure nobody goes to bed hungry at nights, the zero hunger Trust Fund,” he said.

Gonsalves, who also has the portfolio of Sustainable Development, said one of the things the law does is adding a “little tax” on cell phone calls. “Every time you make a call, some of that money is diverted to the Zero Hunger Trust Fund, and we use that money to fulfill the promise that the prime minister made,” he explained.

He said when they started looking at zero hunger a lot of people thought that the government was just going to come and get a whole set of food and give it to people, “but you know what they say if you teach a man to fish it is a lot better than giving him a fish”.

He said that some 3,000 persons in SVG are indigent and the government has identified the areas with larger incidences of poverty, including North Leeward and North Windward.

“A lot of these areas are areas the government is trying to rapidly lift out of poverty,” Gonsalves said.

“This programme will deal with fees that are necessary, registration and the like pay for books for students, buy a book bag, provide the resources for you to pay for the uniform and the shoes and improved nutrition options,” Gonsalves said.

He disclosed that a reading specialist would be attached to the programme to ensure that the children in these early years come out of kindergarten as good readers “because reading is fundamental to your later progress educationally”.

Books have already been purchased and would be distributed through the relevant government department. Meals would also be provided.