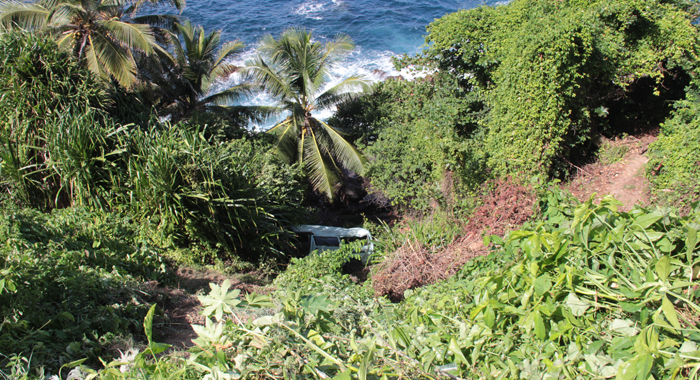 The minivan plunged over 150 feet down a seaside cliff. (IWN photo)

At least five persons were still in hospital Sunday night, one day after they were injured when a minivan plunged over a 150-foot embankment, hitting a number of pedestrians in the process.

Timion Baptiste of Sandy Bay told reporters on Sunday that he was walking home along with other relatives from his sister-in-law’s funeral when the accident occurred.

Baptiste told reporters that he and his wife were walking ahead of the other pedestrians when he heard someone cry out, “Oh God! Oh God! Oh God!”

He said that when he looked back, he saw a light like a flashlight go over the bank.

Baptiste said when he returned to the area, he saw his granddaughter, Shernelle Roberts, 25, sitting in the road, injured and unable to move.

He said he then heard a little voice below the road saying, “Granddaddy! Granddaddy! Help me! Ah nah wah dead.”

Baptiste said he took up the child, his great-granddaughter, Shania Roberts, 8, from along the embankment and placed her to lie in the road.

He said he then began to cry for help. He later saw a car and a pedestrian going back to an inhabited area of the village and then people began to respond.

Baptiste’s daughter, Idena Roberts, 53, was seriously injured, suffering injuries to her torso and lower body, in addition to injuries to her right foot and bruises about her body.

She remained in hospital Sunday afternoon, and Shania was expected to undergo surgery, the Baptistes told reporters.

Shernelle was discharged from hospital Sunday afternoon but was in too much pain to speak to reporters.

Mr. Baptiste said he was saddened by the incident.

The injured persons were initially treated at the Sandy Bay Clinic before being transferred to the Milton Cato Memorial Hospital.

Information surrounding the cause of the accident remained sketchy Sunday evening. Police are yet to issue a statement and might do so on Monday.

Saturday’s accident triggered memories of the Rock Gutter tragedy, when seven students died on Jan. 12, 2015 when a van went over an embankment and into the sea after careening down a hill in Rock Gutter, further north in North Windward, where Sandy Bay is also located.