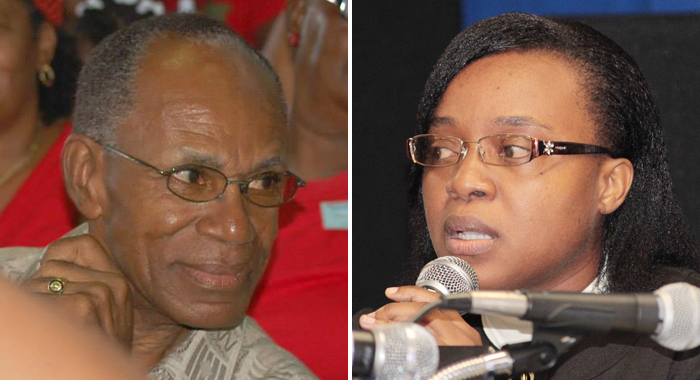 Baptiste is a national scholar, who is also political leader of the Democratic Republican Party.

Her qualifications include a Bachelor of Arts in French and a minor in linguistics (with honours), a double master’s degree in hotel and tourism management, a law degree, and a diploma journalism.

The former senator for the opposition New Democratic Party (NDP) was asked by Minister of Information, Camillo Gonsalves to sit on the select committee of Parliament that is reviewing the Cybercrime Bill.

Baptiste, a staunch human rights advocate, has come out in strong objection to some elements of the bill and has also spoken out against the action of the select committee, which she has portrayed as a clique compose of members of the Unity Labour Party (ULP) and Prime Minister Ralph Gonsalves’ relatives.

On Thursday, in a call to the pro-ULP “Shake Up” programme broadcast on WE FM, Star FM and Garifuna Radio, Da Silva, criticised Baptiste’s punctuation, saying, “You see, they ain’t as bright as they pretending to be…”

He noted that Baptiste argued that speech that is the truth should not be criminalised.

“What about speech that is a lie? And speech that is a lie that is likely to cause public disorder. So even though, Miss Baptiste, you have some fat kids in the schoolyard, Ms Baptiste thinks it’s OK to go and bully that fat kid until the fat kid takes up a stone and knock you in your damn head and kill you,” Da Silva said.

“Right Miss Baptiste? Right Miss Baptiste? Yo’ see how you dotish with all the claim yo could talk French and everything? Yo’ just dotish. Because bullying is a bad thing but she say if is true so what? So bully me. It’s not like yo’ saying it one time. Yo’ constant, yo’ constant and I can’t it anymore and I take up a cutlass, I take up what is near to me and I gi’ yo’ one damn blow and you are dead. Who cause that, Miss Baptiste? Who cause that? Yo stu–. I’m home yo know. I can say you are a stupid bitch,” said Da Silva who normally co-hosts the Thursday edition of the programme, but was not in the studio that day.

“No you cannot,” a female voice sounding as if it was slightly off-mic, said immediately after Da Silva’s comment.

Elson Crick, communications consultant in the Office of the Prime Minister, hosted Thursday programme. He was joined by a male youth activist for the ULP.

“You are on air, Frank-o,” Crick commented.

Da Silva continued reading from a document, then stopped and said, “Look, don’t tell me nothing. They’re quoting her here. And since when ‘b*tch’ is a wrong word?”

Crick said, “Well, but you don’t want to call her that. The connotation is different.”

After ranting for a few minutes more, Da Silva said, “Miss Anesia Baptiste is the epitome of arrogance and, guess what? Stupidity. Isn’t that something; a combination? It might be a very dangerous combination.”

In another call to the programme more than an hour later, Da Silva asked the host if they had cringed at his description of Baptiste.

They said yes and he asked, “Why? I did it for a purpose. I did. Why did you guys cringe?”

“In local parlance, it is not a nice name,” Crick said.

“But guess what, fellas? I just used what she said was OK. You all didn’t get it. Did you? She said it was Ok to call her that. That is my God-given right to do that. So I throw it out there and see if anybody would–”

Crick responded: “Even if she says it’s OK, that don’t mean we should think it is OK.”

Da Silva said: “I am showing people. Listen. Sometimes, you have to demonstrate absurdity by being absurd yourself.”

“That is why I also wanted to know if it is Ok to use the F-word because, after all, according to her, it’s free speech. It is free speech.”

Crick said that what Baptiste said was stupidness because one cannot argue free speech while breaking the law.

In a post on Facebook on Thursday, Baptiste said that people have expressed “outrage and concern” about Da Silva’s actions.

“I want you to know that despite that comment I do not wish for the person to be jailed for their speech. I don’t even want money. I am a free speech proponent and those words neither ‘pick my pocket nor break my leg’, to quote Thomas Jefferson,” she said.

“I am not thin-skinned. I am a mature individual. The problem is that the cybercrimes bill about to pass in parliament will encourage many people to engage the police and possibly the courts for statements like that and less, which are repeatedly communicated to them online; statements which people normally would have overlooked and not become intolerant about. I continually call on the authorities to kill the anti-free speech sections of the bill,” Baptiste said.

Da Silva is no stranger to controversy.

The former activist for the NDP has since broken ranks with the party and has thrown his support behind the ULP, although some supporters of the ULP are not sure that this is a good thing.

They have raise issues of trust, noting that NDP activist and Nice Radio manager, Douglas Defreitas, a staunch critic of Prime Minister Gonsalves, rebuked Da Silva for secretly recording a private conversation with the Prime Minister and playing the tape on Nice Radio.

In the conversation, Gonsalves had explicitly told Da Silva that he hoped that he was not recording him, and the activist said no.

Da Silva was also involved in the secret recording of a conversation of recently retired Commissioner of Police, Michael Charles and a relative of a policewoman who had accused Gonsalves of sexual assault.

The recording was also played on Nice Radio.