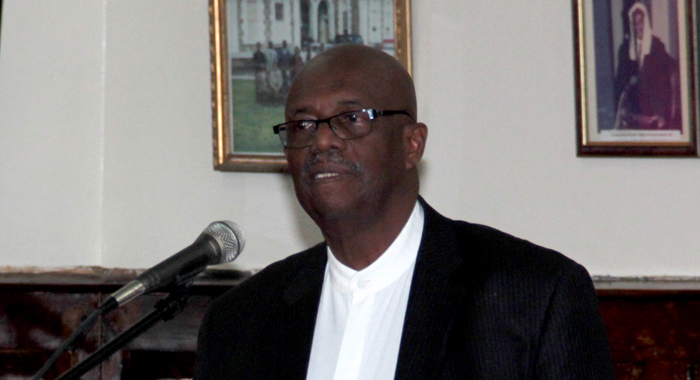 Leader of the Opposition, Arnhim Eustace speaks during the obituary segment of Thursday’s meeting of Parliament. (IWN photo)

Opposition lawmakers are today (Thursday) attending the meeting of the House of Assembly, where lawmakers are expected to pass the controversial Cybercrime Bill into law.

It is only the third meeting of Parliament that the opposition has attended since the Dec. 9, 2015 general elections, in which the Unity Labour Party (ULP) of Prime Minister Ralph Gonsalves secured a fourth consecutive term in office.

The opposition New Democratic Party (NDP), which won seven of the 15 parliamentary seats, compared to the ULP’s eight, has rejected the results of the vote, claiming that the ULP stole the elections.

The NDP has filed legal challenges to the official results of the elections.

The opposition is expected to vote against the Cybercrime Bill although they did not attend any of the select committee meetings that have taken place since the bill was introduced on May 31.

Local, regional and international organisations have expressed concerns about elements of the bill, which they say infringes on freedom of expression.

But Gonsalves has maintained that the amendments made during the select committee meetings have ensured that the bill deters and punishes criminal activities while protecting constitutional rights and freedoms.

Gonsalves had also dismissed as “rubbish” allegations that the bill is expected to protect him and members of his ULP from political criticism.