PM says Cybercrime Bill is not to protect him, ULP 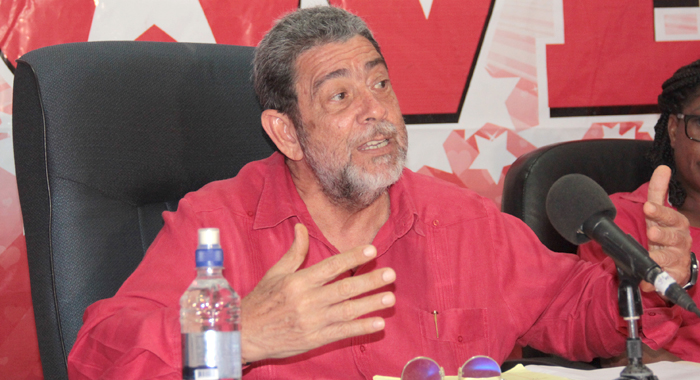 Prime Minister Ralph Gonsalves, on Tuesday, strongly denied that the Cybercrime Bill, which Parliament is expected to pass on Thursday, is not intended to protect him and other members of the ruling Unity Labour Party (ULP).

There have been concerns about some elements of the bill, which was introduced to the public on May 31.

The government, however, says changes have been made to the bill, although the changes have not been circulated to the media.

“That’s absolute rubbish,” Gonsalves said in response to a comment from Dwight “Bing” Joseph on Boom FM about comments being made that the bill is intended to protect him and his party.

Joseph told Gonsalves that there is a recording in which ULP General Secretary, Sen. Julian Francis, is making certain statements about the bill.

Joseph was probably responding to a recording in which Francis said elsewhere on radio, “… I think particularly the bill aims to cover these very ruthless statements that are made online about people.”

Gonsalves said he was not aware of what Francis had said about the bill.

He said consultations were held in St. Vincent and the Grenadines over two days with various stakeholders.

Gonsalves cited illegal access or remaining in a computer, illegal data interception, illegal interference, illegal acquisition of data, illegal systems interference, offences related to the critical infrastructure for the computer, identity-related crimes, computer-related forgery, computer-related fraud, child pornography, violation of privacy, sexual harassment by electronic communication, cyber-bullying of children and vulnerable persons, and also adults, but there are different requirements there, libels by electronic communication, spam, spoofing, elements of the bill and asked if they all related to him.

“Those are things related to me?” he said.

He said that Clause 7 of the original bill — which criminalises a person who, intentionally and without lawful excuse or justification, obtains for himself or for another person, computer data which is not meant for him or the other person and which is protected against unauthorized access — has been altered to include a public interest exception.

The revised bill says that particular subsection does not apply to a person who shows that in the particular circumstances the obtaining was justified in the public interest.

The revised bill, however, says that nothing in that section shall be construed as protecting the unauthorised access (a) to personal data consisting of information of a person’s physical or mental health; or (b) to any other information the disclosure of which is prohibited by law from disclosure.

Gonsalves explained, saying: “So that if someone gets some information that a public official, a politician or whatsoever is corrupt, they get data on it, you obtain it, this information, when you publish it, they can’t come at you because you will have what is called a public interest defence, which did not exist before when the bill was originally drafted and the way in which some people have passed it in the region.”

He noted sub-clause (3)(b) may relate to certain national security information.

Gonsalves also elaborated on (3)(a).

“So that if anybody gets any information about Bing or Stephen, about your personal — or me, about my mental or physical health, you wouldn’t have the public interest defence but the society may well be saying but you should disclose it if it hampers you from functioning,” said Gonsalves on the show in which he said that he is in good health and is HIV negative.

Gonsalves reiterated his support for criminal libel, even as he noted that the Grenada government was “persuaded” to remove it from the law books.

He, however, said he was “absolutely not” trying to control free speech.

5 replies on “PM says Cybercrime Bill is not to protect him, ULP”