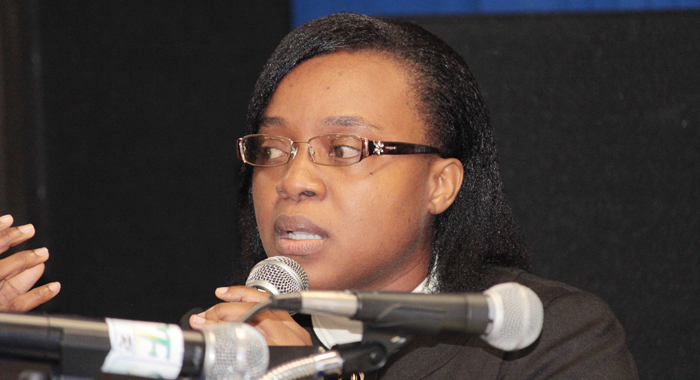 The Democratic Republican Party (DRP) is calling for a repeal of the Cybercrime Act, which was passed in Parliament on Friday amidst protest by the opposition and regional and international freedom of expression advocates that it will have a chilling effect on free speech.

DRP leader, Anesia Baptiste, who has been championing opposition to the legislation is calling on the Ralph Gonsalves government “to go back to the drawing board” to develop proper cybercrime law that “does not damage fundamental freedoms and at the same time create loopholes for cybercriminals to escape”.

Baptiste said in a statement on Wednesday that her continual research on cybercrime law worldwide reveals that there are serious and fundamental problems with the HIPCAR (Enhancing Competitiveness in the Caribbean through the Harmonisation of ICT Policies, Legislation and Regulatory Procedures) model law that was the basis of SVG’s Cybercrime Act 2016.

“Our discussion with legal, international experts unearths a host of problems with this model: from weak language used in the drafting of the law which potentially promotes cybercrimes rather than protect against them, inconsistencies with the Budapest Convention in terms of language and offences, to contradictions with international best practices in definitions of cybercrimes offences, which will make it difficult to achieve international cooperation in the fight against cybercrimes,” Baptiste said.

Baptiste, who participated in the select committee that reviewed the first draft of the bill, said the DRP believes that the government’s “rush to enact the law, giving limited time and no quality opportunity to have proper public study and scrutiny of the bill, suggests a hidden evil agenda for its use”.

The former senator said the parliamentary debates from the government’s side of the house also revealed “efforts to mislead the public about the law in its current form; attempting to sell it as a law which protects children from cyberbullying when rather it will criminalise children for freedom of speech, criminalise the truth and generally breed a thin-skinned society in SVG.

“This is in addition to the chilling effect on freedom of expression, the press and information, which the revival of usage of the archaic and draconian criminal libel law will have on journalism and whistleblowing.”

A DRP administration would also repeal criminal libel provisions from the Criminal Code and would also reform other provisions which unjustifiably criminalise speech, including the repeal of criminal seditious words “and amendments where necessary to only criminalise threats to murder and violence against the person and or property” as well as unclear provisions such as insult and blasphemy laws.

Baptiste said her party also rejects former attorney general, Queen’s Counsel lawyer Parnell Campbell’s “legally unrationalised statements that the Cybercrimes Act is constitutional and feels it exposes the incompetence of his opinion on this point, even after years of legal experience which he boasts

She said that in Trinidad and Tobago, a similar cybercrime bill, which contains online criminal libel and a similar vague cyberbullying definition is described as unconstitutional by those who tabled the bill.

“It reads in its introduction: ‘The Bill would be inconsistent with sections 4 and 5 of the Constitution and is therefore required to be passed by a special majority of three-fifths of the members of each House’,” Baptiste said.

She said Section 4 of the Trinidad and Tobago constitution outlines fundamental rights and freedoms such as freedom of expression and they are acknowledging that the bill itself has elements which render it unconstitutional and they are requiring a higher threshold for it to pass.

“The DRP believes in such a case the unconstitutional provisions should be completely struck out,” Baptiste said.

She added: “How can a legal luminary of 40 years of experience, such as a Q.C., fail to see such blatant contradictions of the Cybercrime Act with our own Constitution?”

Baptiste said the DRP will continue to call for the repeal of the Cybercrime Act 2016 and for law reform in SVG “for the protection of the people’s inalienable rights and freedoms, genuine crime fighting and solving and for justice for all”.

2 replies on “DRP calls for repeal of Cybercrime Act”