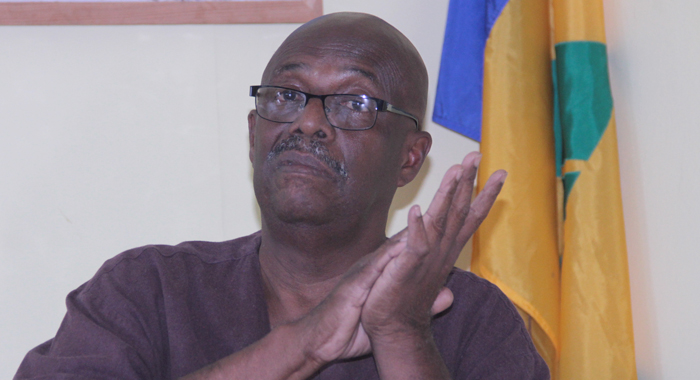 President of the NDP and Leader of the Opposition, Arnhim Eustace speaking to IWN on Thursday. (IWN photo)

President of the opposition New Democratic Party (NDP), Arnhim Eustace says the US$500,000 sent to his party two weeks before the December 2015 general elections was for campaign financing.

“That is an example of one contribution we received towards the end of the campaign for the last election that we feel is totally in order. They (the government) can carry out whatever investigation they want,” he told iWitness News on Thursday.

He further told iWitness News that he welcomes any investigation the Ralph Gonsalves administration may wish to carry out into the transaction.

Eustace, who is also Leader of the Opposition, however, said the government should investigate the reported sale of US dollars on the black market in St. Vincent and the Grenadines (SVG) at about two-thirds of their value.

During last week’s debate of the Cybercrime Bill — which was passed into law, Prime Minister Ralph Gonsalves said US$500,000 was sent to the NDP in the lead up to the polls.

Eustace told iWitness News he doubts that any investigation is being carried out as Searchlight newspaper reported on Tuesday.

“All the requirements were met in terms of any contributions we received,” he said.

The newspaper said that the monies were sent through Belize.

Eustace told iWitness News that there was nothing untoward about the transaction.

“I find the Prime Minister’s comment very interesting. He knows, as I do, that particularly at election time, we receive campaign contributions from sources that might be sympathetic to our goals.”

Eustace confirmed that the NDP received the money via a lawyer who deposited it into the NDP’s account. He said he could not recall how the money was routed.

“I welcome the investigation. It is campaign contribution which we get not only from that source but other sources. That was one of the last contributions we got before the last elections.”

He said that no state authority has ever approached the NDP to inquire about the transaction, adding that the finds it strange that Gonsalves was making an issue of the transaction eight months after it was made.

“I think that is part of the aura around this whole Cybercrime Bill to try to take attention away from what is happening. I heard his comment in the Parliament, I knew the contribution he was referring to and I know the contribution was made, how much and when it was made. I welcome the investigation. We have nothing to hide.”

Eustace said that he is confident that the bank did not disclose information about the transaction but said he does not know how the prime minister knows about it.

“I don’t think our bank would do that. If they had a suspicion that the transaction was violating any rule, had anything to do with money laundering, they would not have accepted the contribution [for] us. It would not be in their interest to do that… They themselves would have been in difficulty if they had doubts about its legality. They won’t accept it because the FIU would come down on them and they would find themselves in trouble,” Eustace said.

Eustace said there are other things that the prime minister needs to have investigated.

“I’m constantly being told, almost every day, about the amount of US dollars circulating in St. Vincent and the Grenadines and being sold at prices which really, once they are true, can only be money laundering. As low as two EC dollars for a US dollar. I want the prime minister to investigate that,” Eustace said.

“Let the public know that is true,” Eustace said.

The commercial bank exchange rate for a US dollar is EC$2.67.

Eustace said he does not know who is selling the US dollars, but said he would like Prime Minister Gonsalves to investigate this.

“I’d really be happy to hear what the results of that investigation are,” Eustace said.