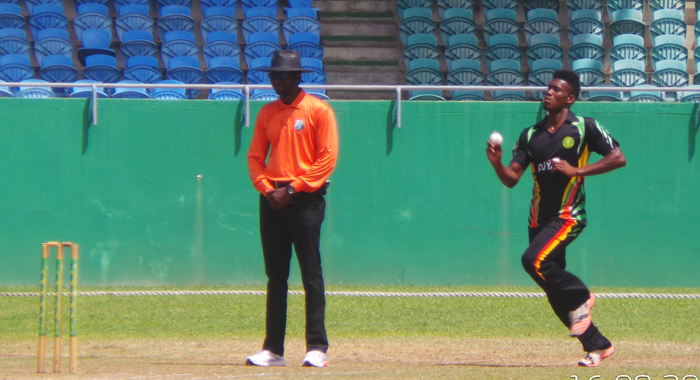 Guyana, Jamaica, and Trinidad and Tobago all registered victories when action continued on Tuesday in the West Indies Cricket Board-WICB- Under 19 Cricket Tournament.

The Guyanese inflicted a first defeat on table toppers Windwards after beating them by 38 runs at the main Arnos Vale Playing Field.

Winning the toss and batting first Guyana reached a competitive 238/9 off their 50 overs, with 41runs coming between overs 46 and 48.

West Indies Under 19 allrounder Keemo Paul git a topscore of 58 which included two 4s and five 6s, while Bhaskar Yadram got 35 and Marlon Hubbard 23 off nine balls. The Windwards did not do themselves any favours by giving away 23 extras inclusive of 15 wides. Alick Athanaze 2/35, Ryan John 2/39 and Kassim Peltier who conceded 30 runs in his last over 2/63 shared the wickets.

The Windwards who were in search of a fourth victory, looked well placed after Anil Mathew (39) and Johann Jeremiah (32) had put on 68 for the opening partnership. The Islanders looked well in charge at 156/4 in the 35thover but it all went wrong with the dismissal of Alick Athanaze (33) who took the attack to the Guyana spinners as he hit three sixes off the 35 balls he received. Johnel Eugene (31*) played another intelligent hand but could only look on from the other end as Paul yorked both Rasheed Fredericks (0) and Jonathon Taylor (0) to dismiss the Windwards for 200 in 44.5 overs.

Paul who was named man of the match finished with 3/39, Kheshram Seyhodan 3/32 and Akenie Adams 3/38 to bowl their team to a third win in four matches.

Jamaica resurrected their chances of a berth in the final with a convincing 9-wicket win over the ICC Americas at the Park Hill Playing Field.

Bowling first after losing the toss, the Jamaicans took a stranglehold on the match and never let go-dismissing their opponents for a meagre 133 in 41.1 overs Tyrone Daley returning the exceptional figures of 10 overs one maiden 4-14 he received support from Miguel Smith3/31and Javor Harrison 3/46. Sagar Patel got 41Arjun Patel 32 while there were 22 Extras.

Jamaica cognisant that run rate could play a part in determining the eventual finalists wasted little time in getting to their target-ending 135/1 in 11.5 overs with captain Michael Frew hitting 40 from 14 balls with one four and six 6s, while Jordane Hill 42* and Orande Pearson 43* both got their runs in quick time as well.

Trinidad and Tobago put their 52 run defeat at the hands of Guyana at the Stubbs Playing Field on Monday to record an impressive 4-wicket win over the Leewards at the same venue in a high-scoring affair.

Chasing a challenging score of 281 set by their opponents, TnT were pushed down victory street by Keagan Simmons who fell agonisingly short of a century when he was caught for 99. He faced 96 balls and struck 12 fours and two sixes. Brandon Maharaj 51(4×4, 3×6) and captain Kirstan Kallicharan 43 (5×4,1×6) chimed in to play their part in the win as TnT ended 282/6 off 44.5 overs.  Kofi James 3/52 was the Leewards most successful bowler.

Earlier the Leewards were piloted to 280/6 in their 50 overs by opener Tyrone Williams who stroked a brilliant 132. He batted 189 minutes faced 139 balls and struck 13 fours and three sixes. Kofi James hit an even 50 and there were 31 Extras inclusive of 20 wides. Negus Smith 2/32 was the best of the TnT bowlers.

Trinidad & Tobago gets a Bye this round.