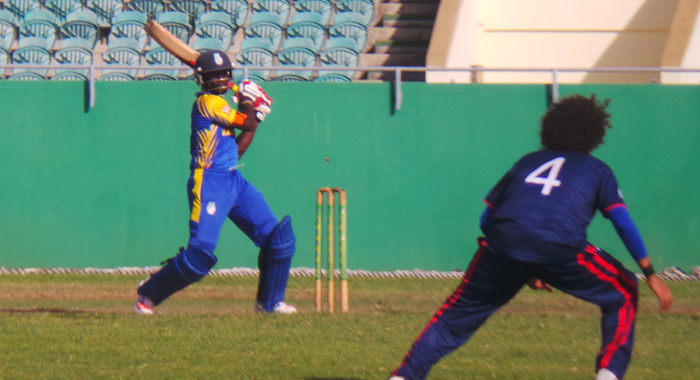 Len Boucher pulls during his 69*.

The Windwards Islands returned to winning ways with an emphatic 8-wicket win over the Leeward Islands at the Park Hill Playing Field, when the West Indies U19 tournament resumed on Thursday.

The Windwards who suffered a 38 run defeat to Guyana on Tuesday moved to the ascendancy in the match by dismissing their opponents who chose to bat for 54 in 20 overs on a two pace pitch.

The Windwards opening bowlers of Ryan John and Jonathan Taylor and left-arm spinner, Rasheed Fredericks maintained an iron grip on matters after reducing the Leewards to 12/3 inside the first four overs with Ross Powell (0), Karim Gore (0) and Kofi James (0) all failing to get off the mark.

Opener Tyrone Williams 17 was the topscore with Camron Pennyfeather 13 the only other score into double figures.

The Windwards who have been able to exploit the bonus points system for wickets taken by pacers received more valuable point as Taylor grabbed 3/9 and John 2/23 while Fredericks took 3/7 to continue his good form in both sphere of the competition.

The Windwards wasted little time in reaching their target as they finished on 58/2 in 6.3 overs with Anil Mathew on 39* and Alick Athanaze on six. Pennyfeather who removed Johann Jeremiah (7) and Emmanuel Stewart (3) ended with 2/24.

The Sion Hill Playing Field was the scene of another Guyana win, after overcoming Jamaica by 32 runs.

Defending champions, Guyana who won the toss and elected to bat looked on course for a good total after openers Ronaldo Renee 13 and Sherfane Rutherford 34 had raised 48 for the first wicket before the former went by the runout route.

Wickets fell steadily and this hindered the South Americans from really pushing on as they slipped to 89/5. They were given a late innings boost by

Jamaica in reply were always made to struggle as the Guyanese spinners created no ends of problems for the impatient and at times leaden-foot batsmen with Rutherford being the main destroyer.

Barbados behind an unbroken fourth wicket century stand between Leniko Boucher and Yvan Grant made light work of the ICC Americas with a seven-wicket win at the main Arnos Vale Playing Field to keep alive their chances of a place in Sunday’s final.

The ICC Americas who won the toss and elected to bat were dismissed for 203 off the final ball of their allotment of 50 overs with Akashdeep Gill 85 (2×6, 8×4, 146 balls) and Sagar Patel 32 who shared 56 for the opening partnership being the main run-getters.

The preliminary round of the tournament ends today and will see the Windward Islands taking on Trinidad & Tobago at Park Hill, Barbados meeting Guyana at Arnos Vale and Leeward Islands battling Jamaica at Sion Hill.

The ICC Americas get a Bye this round.

The Final is slated for the main Arnos Vale Playing Field on Sunday.