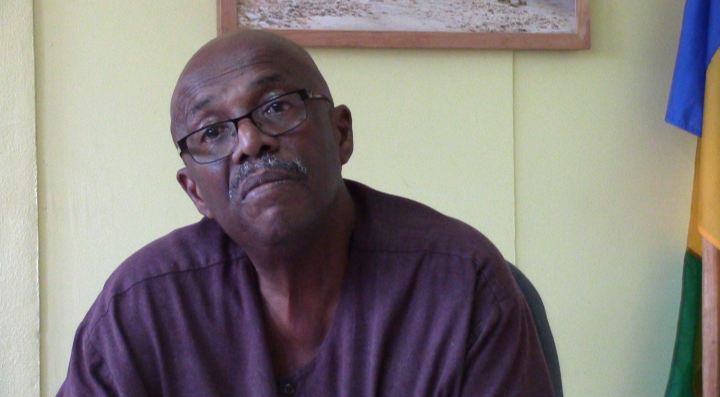 Arnhim Eustace says he would allow delegates at the New Democratic Party’s convention to decide is he stays on as leader. (IWN photo)

President of the main opposition New Democratic Party (NDP), Arnhim Eustace, says he will allow delegates at the party’s next convention to decide whether he continues as party leader.

The 72-year-old politician has been leading the NDP since October 2000, when he took over from party founder and former prime minister, Sir James Mitchell.

Eustace has been at the helm of the NDP during four successive election defeats, the most recent of which (December 2015) the NDP says was a victory stolen from the party by the ruling Unity Labour Party.

The NDP did not have a national convention last year because of the general elections, but has decided to have a convention this year.

Party members and supporters and the public at large are looking forward to the NDP’s convention, especially since some commentators and party supporters say that Eustace cannot reasonably expect to continue to lead the party.

But, asked on Thursday whether he will put himself up for another term as NDP president at the convention, Eustace told iWitness News that he will allow delegates to make that decision.

Asked if he already has a position and whether he will give way to someone else even if he is nominated at the convention, Eustace reverted to his earlier response.

“I still say the same thing,” Eustace, who has been representing East Kingstown since 1998, told iWitness News.

“If they say, ‘Eustace go’, ah gone,” he told iWitness News, adding that if party supporters say stay, he will do just that.

Eustace’s comments come as the party say they are preparing for fresh elections this year.

MP for Central Kingstown, St. Clair Leacock, an NDP vice-president, said on radio this week that he believes that the ULP will call a fresh election before the end of 2016.

Leacock said he does not believe that that Ralph Gonsalves ULP administration is comfortable with the one-seat majority it maintained at the Dec. 9, 2015 polls.

The ULP won eight of the 15 parliamentary seats while the remaining seven went to the NDP, a carbon copy of the December 2010 results.

However, the ULP also reversed a movement away from the party and increased its number of popular votes for the first time since coming to office in March 2001.

Prime Minister Ralph Gonsalves has told ULP supporters that he was tempted to call fresh elections in February because of the NDP’s protest of the December election results.

Eustace told iWitness News on Thursday that he believes that Vincentians would return to the polls less than one year after the last vote.

“That’s what we are working on: to get back to the polls. That’s our objective. That is what the boycott is about and everything we’ve been doing. That’s what the protest outside the electoral Office is about.”

The NDP has been boycotting Parliament, attending only three sittings since the new legislature was sworn in on Dec. 29.

But with just four months left in the year, how prepared is the NDP for a general election if one were in fact called?

“Well, we have been doing our work. There are certain things that we are changing and we will change some candidates and that process is on-going. We are making some changes. We have had our own retreat, reviewed the situation and established certain committees to report on certain areas. Those reports are now in and we are going to be going through those reports in the next few days. Actually, I have them right in front of me,” Eustace told iWitness News.

He, however, declined to name the candidates that the party will replace.