Guyana, Windwards to battle in WICB U19 final 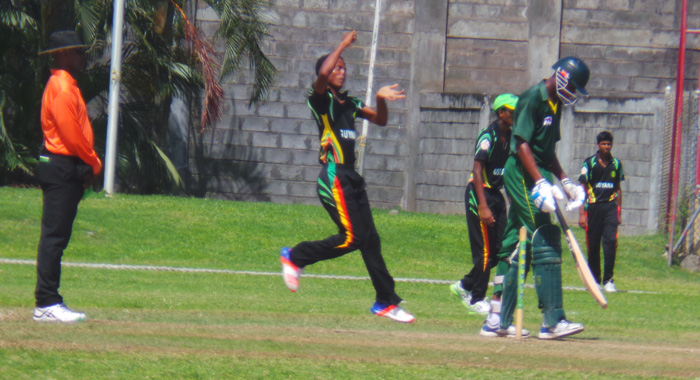 The Windward Islands will contest the West Indies Cricket Board (WICB) Regional Under-19 50-Overs title against defending champions Guyana at the Arnos Vale Playing Field on Sunday (today) after overcoming a later order collapse to beat Trinidad and Tobago by 3 wickets in a high-scoring match at the Park Hill Playing Field.

The Windwards, who maintained their place at the top of the standings at the end of the seven-team round-robin series, will be looking to win their first title since doing so in 2012 in Barbados.

Guyana finished second while Barbados had to settle for the third spot.

Jamaica placed fourth after easily defeating the Leewards by 72 runs at Sion Hill playing field while Trinidad and Tobago, who promised so much but proved too inconsistent, ended fifth. Leewards and the ICC Americas teams finished sixth and seventh respectively.

The Windwards, who were set a challenging total of 258 after winning the toss and inserting their opponents, were piloted to victory by another solid batting display from their top order led by captain Emmanuel Stewart (92), Johann Jeremiah (61) and Alick Athanaze (45) to see them end 263 for 7 in 42 overs.

The islanders, who lost Anil Mathew (11) with the total on 18, took command through a 150-run second wicket partnership between the stylish and talented Stewart and the impetuous Jeremiah.

The pair were not afraid to use their feet to the Trinidad spinners who got some purchase on the two pace surface. The left-handed Jeremiah, who was the more adventurous at times, was caught off Jabari Mills at 168/2 in the 28th overs. He struck 5 fours and 2 sixes off the 79 balls he faced.

Stewart, who has impressed all during the tournament with his temperament and talent, looked set for a century but for the second time in the regional tournament and the third time this season fell in the 90s when he was LBW by offspinner Bryan Boodram for 92 at 212/3. He struck 9 fours and 2 sixes off the 89 balls he faced. He had made 93 against Barbados in the three-day tournament and 93 against Dominica in the Windwards tournament.

The departure of Stewart and Athanaze, whose 45 came off 29 balls with 2 fours and 3 sixes, saw the Windwards go into convulsion with 4 wickets going down for the addition of 5 runs as they slipped from 231/4 to 236/7. However, the ever-dependable lower order pair of Ryan John (16*) and Othneil Lewis (11*) saw them home.

The Trinidad bowling was led by spinners Bryan Boodram 3/36 and Jonathan Bootan 3/52.

Earlier, TnT, behind another brilliant knock by Joshua DaSilva (88) which included 3 sixes and 9 fours off 99 balls, skipper Kirstan Kallicharan 38 and opener Keagan Simmons 32 posted what in the end was a competitive total of 258 all out in 48.3 overs. It, however, was far less than what looked possible when they were 182/3 in the 21st over.

Alick Athanaze, who triggered the middle order slide, finished with 4/43 with his offspin and left-arm spinner Rasheed Fredericks 2/39 and pacer Ryan John 2/44.

The match at the main Arnos Vale Playing Field saw Guyana defeating Barbados by 85 runs in the decisive seventh round encounter, which saw both teams going into the match with a serious chance of making it into the final.

Batting first after winning the toss, the defending champions were helped to their total of 183 all out off 49.5 overs thanks to seven batsmen who got into double figures as well as 21extras.

The most fruitful partnership of the innings came from Perez and Paul who added a 53-run third-wicket stand.

Barbados, needing a victory to pip the champions into the final, found the Guyana spinners too much of a handful and meekly subsided for a paltry 98 in 37.5 overs with opener Shia Brathwaite getting the topscore of 35 (4×4, 1×6, 100 balls, 89 mins). Marlon Hubbard took 4/11and Looknauth Chinkoo 2/18 to be the leading wickettakers while left-arm spinner Akenie Adams who impressed all season went wicketless but only conceded 9 runs off his 7 overs as they combined to propel their team into the final.

Jamaica enjoyed one of their better matches, albeit at the end of their campaign, with a 72-run win over Leeward Islands at the Sion Hill Plating Field.

Batting first on a slow pitch after winning the toss, Jamaica tallied 167 for 8 in their 50 overs with Brad Barnes 34, Dominik Samuels 32 and Andre Bailey 28 being the main scorers. Their eventual total was well below what they may have been expecting at 96/3 in the 28th over after Samuels and Barnes had put together 71 for the third wicket. The Leewards bowling was led by Kofi James 2/26, Karima Gore 2/28 and the hardworking Kian Pemberton 2/30.

The Leewards inflicted the only defeat on defending champions Guyana in their opening match in the limited overs segment of the competition and took a nose dive after that continued their dismal form. Opener Tyrone Williams (23) once again had the topscore while Kofi James 20 and Pemberton 17 also got into double figures.

On Sunday, the Windwards, who suffered their only loss in the competition to Guyana, will be seeking revenge while the Guyanese who were dethroned by TnT in the three-day competition will be looking to return home with one title intact.

The action begins at 9:30 a.m. at the main Arnos Vale sporting facility and you can follow us for a comprehensive report on the match.