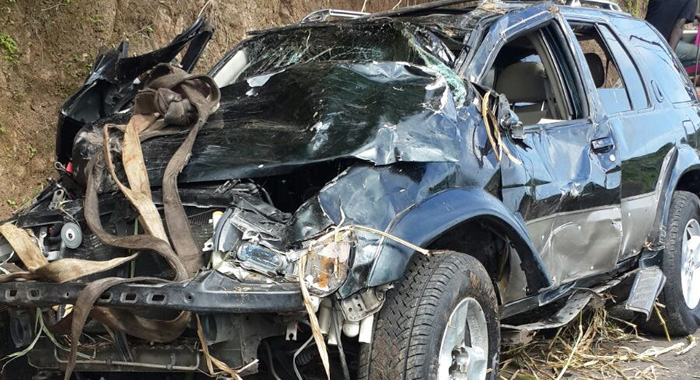 The vehicle after the accident.

The mother of Kiara Shortte, the 17-year-old who died when a vehicle plunged down an embankment in Hope Well around 3 a.m. Friday, says she wants answers about her daughter’s whereabouts and companions that night.

The mother, Merlene Shortte of Prospect, told reporters on Saturday that she too has seen on the internet a screenshot of a conversation that her daughter reportedly had with someone in which she allegedly made certain comments about the physical condition of the driver of the vehicle.

Shortte wants the person who her daughter reportedly had the conversation with to contact her so she put her mind at ease regarding what might have happened that night.

At the same time, Shortte is waiting for her 20-year-old niece, who was also in the vehicle and was injured in the accident, to recover enough, although she has been discharged from the hospital, to question her about the ordeal.

Shortte said that her daughter lived with her but was spending the summer vacation with her father, Randolph Jacobs, in Rillan Hill.

She said that she has since learnt that the teenager went to Mesopotamia on Thursday and had sent a text message to one of her stepmother’s nieces to say that she would spend the night at an aunt in Sayers, a village in the interior district.

Shortte, a security officer at the Milton Cato Memorial Hospital was getting ready for work around 4 a.m. Thursday when she got a call from one of her niece’s boyfriend.

“… he asked me if I could hold up. So I asked him what he meant by that and then I said, ‘Okay, I can. I am leaning on something. Then is when he opened the sad news to me,” Shortte said.

Merlene said she did not have any credit on her phone so she asked her niece’s boyfriend to call Kiara’s father and ask him to call her (Merlene).

When Jacobs called, Shortte said she asked him where their daughter was and he said she was in Mesopotamia at her aunt’s.

She then told him that she was informed that Kiara was involved in an accident and had died.

Shortte, who is spending time in Glenside, another Mesopotamia village, said she asked Jacobs why he had not told her that their daughter was in the district.

She, however, explained that Jacobs works at a supermarket in Kingstown and when he got home, his girlfriend told him that Kiara had sent a text message saying she would go back to Rillan Hill Friday morning.

Shortte said one of her sisters later confirmed that the news about her daughter was true.

Shortte said that she is still unsure about who else was in the vehicle.

“… except for knowing that she was with her [cousin], which is Crystal Shortte. [I am] still waiting to hear everything that I need to know… It was four of them,” Shortte said, adding that she was told that the driver was one “Mr. Charles” — who lives near her sister — and the fourth occupant of the vehicle was “an old guy”.

“That’s all I know,” Shortte said.

She said that the police called her Thursday morning telling her not to report to work.

“They just asked me a few questions and told me to hold strong. I think they didn’t want to say anything much at that time,” Shortte said.

She said she saw at the hospital Thursday morning the man said to have been the driver of the vehicle, but didn’t get to speak to him because of his condition.

Shortte, however, said she exchanged contact information with the driver’s brother, adding that he told her “they will call me and if there is any need of help, I can let them know. Otherwise than that, my sister is the one they’re talking to most.”

Shortte said she doesn’t know where her daughter and niece went Thursday night.

“You know you are hearing all kinds of rumours and that. I did not want to question my niece as yet because she is in a lot of pain,” she said, adding that her niece is wearing a neck brace.

“I believe that the Lord had to spare one of their lives in order for them to tell the tale, how it started to the end,” she said.

iWitness News was reliably informed that Kiara was at a bar in Arnos Vale earlier Thursday night, where she took photos with a male friend from a South Leeward community. She is reported to have also been seen at another entertainment spot further north along the Windward Highway.

Regarding the screenshot circulating via the internet and instant messaging services, Shortte said she has seen the image in which Kiara reportedly said she was telling someone her whereabouts in case the vehicle got into an accident.

“I am trying to hold strong. I have all the support that I need from my family friends, her school friends; teachers, everybody is calling me,” Shortte said, adding that she has not spoken to the person with whom Kiara was reportedly having the conversation.

Shortte told iWitness News Sunday evening that she understands that someone had reportedly modified the conversation and was circulating that edited version and asked that if this is the case that the persons desist from doing so.

She said she had her daughter’s cellphone but was unable to access its content because the device is password-protected.

Kiara graduated from the Adelphi Secondary School this year and obtained seven of the eight CXC subjects she wrote, according to the preliminary results released last week.

“She is a bright student. Never failed. She always came second right through the years. She is very friendly, quiet, mannerly, respectful and she will be missed by everyone who knows her,” her mother said of the second child and first daughter among her four children.

“She had made me proud but so sorry that she is gone so soon,” Shortte said.

She said she last saw Kiara on Tuesday, “getting the last hug from her and the last kiss. She said to me, ‘Mommy, I love you and I will be there to help you when the time comes. But now, she is gone.”

Kiara would have celebrated her 18th birthday on Sept. 8 and wanted to enrol at the Technical Division of the SVG Community College.

Her mother said she wanted to be a lawyer or a nurse.

“She loved church. She always went to church, participated in church,” Shortte said of her daughter who was a Seventh-day Adventist, but went to another church in Prospect.