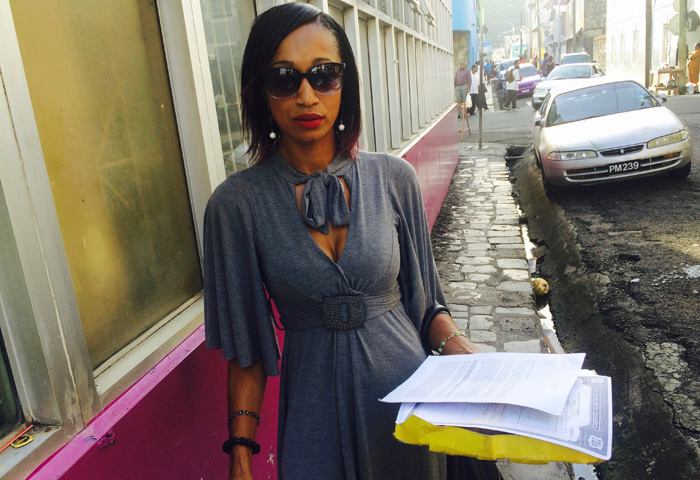 James shows iWitness News on Monday letters she and her lawyers wrote in an attempt to have her father’s body released to New Haven Funeral Home. (IWN photo)

The daughter of an elderly man who died in hospital on Aug. 8 is considering legal action to force a local funeral home to release his body to the undertakers that he wanted to handle his funeral arrangements.

His only child, Katrina James, originally of Old Montrose, told iWitness News that she instructed MCMH to release his body to New Haven Funeral Home.

She is, however, now at a loss as to how his body ended up at Ever-Ready Funeral Home and she is being asked to pay EC$3,500 for its release.

James has appealed to Prime Minister Ralph Gonsalves and the Ministry of Health to intervene and had to cancel all of the funeral arrangements she made for last Thursday.

James, who lived in Canada for 24 years and returned home three years ago when her father’s kidneys began to fail, said she received a call around 3 p.m. on Aug. 8 — about four hours after she last visited her father — saying that he had died.

She said she got to the hospital at 3:20 p.m. and stayed with her father’s body on the ward until around 4:33 p.m., when a nurse told her that his remains had to be moved to the morgue.

“But before that happened, there is this worker that worked there … who came to me and talked to me and told me he could get a cheaper rate at Mills (Ever-Ready Funeral Home) for my father,” James recounted to iWitness News on Monday.

She said she was then asked to sign a book in which she also indicated that the funeral arrangements would be entrusted to New Haven Funeral Home.

James said that after leaving the hospital, she went to New Haven Funeral Home’s office — which is located near the hospital — to inquire about their funeral packages.

The following day, Tuesday, Aug. 9, James said she paid to the hospital EC$300 — made up of her father’s Public Assistance of EC$225, which she had collected the day of his death, EC$50 found in a drawer after his death and $25 from elsewhere.

She was issued the death certificate and took it to New Haven Funeral Home to have them collect the body from the hospital morgue.

“They (New Haven workers) came back and said my father’s body had been [taken] to Mills (Ever-Ready Funeral Home) the Monday night. I never consented to my father going to Ever-Ready. Nobody contacted me saying my father was there,” James told iWitness News.

“Why would I send my father’s body to Ever-Ready when I done make plans at New Haven that same evening that I left there?”

She said an Ever-Ready worker at the hospital told her that if she wanted her father’s body she had to pay EC$3,000.

“He say, ‘Your father done embalm. Go up there and pay 3,000 dollars’,” James told iWitness News.

She said she then contacted a lawyer “because that is not what I signed for. I signed for New Haven. That’s a tradition for me and my family. That is what my dad wanted.”

James said that on that same say, Tuesday Aug. 9, she went back to the hospital administrator who told her it was probably an error that the body was sent to Ever-Ready Funeral Home and told her she should visit Ever-Ready and talk to them.

She said that based on her experience with the Ever-Ready Funeral Home worker at the hospital, she asked a police officer to accompany her to the undertaker’s office in Frenches.

James told iWitness News that the workers “confronted” her at the funeral home saying she had consented to her father’s body being taken to Ever-Ready Funeral Home.

She said she asked the funeral home when would she get her father’s body and was told that they would have to talk to the hospital and sort out the matter.

“Miss James did not give you any instructions or consent for you or any official of your institution to deal with her father’s remains and as such is not indebted to you for any action that you have taken unilaterally in that regard,” the lawyer wrote.

But in an Aug. 11 response to Leigertwood-Octave, lawyer for Ever-Ready, Rochelle A. Forde, said that Ever-Ready had informed her that on Aug. 8, they received a call from “personnel” at MCMH for the collection of Ballantyne’s body.

Forde said her client dispatched personnel to the hospital where they collected Ballantyne’s body and took it to the funeral home in Frenches “where my client proceeded to embalm the said body pursuant to proper health and industry practices”.

Forde said that Ever-Ready is not opposed to releasing Ballantyne’s body “but request that it be paid for the services it performed thus far which total EC$3,500, before the release.

“Given the sensitivity of this matter, I trust that this issue will be resolved soonest so as to avert additional cost,” Forde said.

James told iWitness News that last week Tuesday, Aug. 16, she went to the National Insurance Services (NIS) and made all the arrangements for the relevant payments to be made to New Haven Funeral Home.

She showed IWN the receipt from New Haven indicating that all the funeral expenses had been paid for.

“I buy my father clothes that same day. I went in and I registered the death and paid $500 at Town Board. I made all the arrangement to have him buried,” she told iWitness News.

However, Ever-Ready had maintained that she must pay for the services that it performed on her father’s body, but has since reduced the cost by EC$500 to EC$3,000.

“It is delaying it [the burial]. It is embarrassing, it is distressful, it’s a mess,” James said amidst sobbing.

She told iWitness News she wrote to Prime Minister Gonsalves, who called, but she missed the call that morning. He left a voice note saying that he received the letter, read it and sent it to the relevant public servants.

In her Aug. 12 letter to Gonsalves, James outlined the circumstances leading up to her father’s death and the impasse that arose after.

James told iWitness News that she met on Monday with Permanent Secretary in the Ministry of Health, Luis de Shong, who, she said, “defended his staff”.

“So I went back to my lawyer now and we have to take legal action because it is not going anywhere,” James told iWitness News after a meeting with her lawyer Monday evening.

“I cannot pay 3,000 when it is something that I did not consent to. My father wanted to be buried by New Haven. I cannot bury my father at someplace that he didn’t want to. I have a heart and I have a conscience. I love my father. I’m the only child for my father. It’s been two weeks I am up and down,” she lamented.

She noted that she had planned to bury her father last Thursday.

“But I had to go and cancel. It was such an embarrassing thing. Everybody just meet me and ask and stuff like that. I just want this to get over with; like seriously. It’s taking a toll on me,” James said, sobbing.