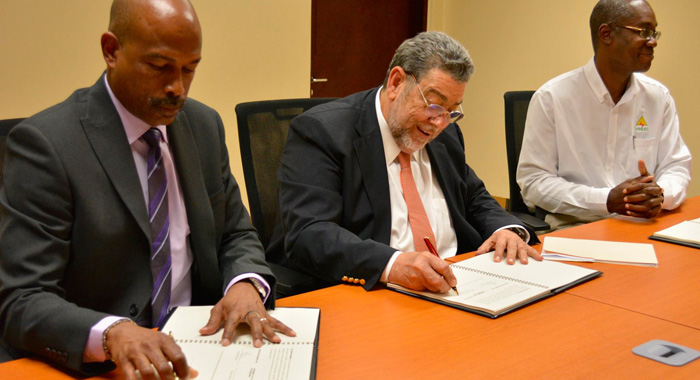 The government of St. Vincent and the Grenadines (SVG) has signed an agreement with the CARICOM Development Fund (CDF) for a concessionary loan to be used for the establishment of a solar photovoltaic renewable energy project at the Argyle International Airport (AIA).

Present at the official signing ceremony at the AIA site on Thursday were Prime Minister Ralph Gonsalves along with Chief Executive Officer, Rodinald Soomer and Legal Counsel, Arden Warner. Also in attendance were Chief Executive Officer of the IADC, Rudy Matthias and the acting Chief of the St. Vincent and the Grenadines Electricity Services Ltd. (VINLEC), Vaugh Lewis, and other officials.

In his address, Lewis outlined technical details relating to the project, noting that once established the solar PV project is expected to produce some 1,000 kilowatts of electricity, enough energy to power over 200 households. Lewis also highlighted the fact that this type of project requires no large infrastructural work and will likely be a cost effective venture as the technology “has reached conventional levels.”

Offering remarks on behalf of the CDF, Soomer said that the concessionary loan facility represents the fourth such agreement signed with the government of SVG with a value of US$8.2 million, which converts to a contribution ratio of 4:1, which he said is a great multiplier effect to benefit SVG.

Gonsalves contextualised the loan agreement, outlining key factors contributing to the availability of such funding. He noted that the CDF was established under Chapter 7 of the Revised Treaty of Chaguaramas, which was signed by the CARICOM Heads of Government on July 4, 2008 but became operational in November 2008.

The establishment of the CDF is rooted in Article 158 of the Revised Treaty of Chaguaramas, which has as its objective the establishment of a regional development fund to provide technical and financial assistance to the disadvantaged countries, regions and sectors in CARICOM. The CDF is considered a key compensatory mechanism in the architecture of the integration movement as outlined in the organization’s strategic plan for 2015 — 2020.

Gonsalves also added that SVG has previously received funding amounting to US$630,000 through the CDF for the procurement of the stone crushing plant, being used during the construction of the AIA. For this renewable energy project, Gonsalves said that he estimates that the AIA stands to benefit greatly from the reduction in energy costs to run the facility as he has been advised, is likely to reach a figure between EC$3 million and EC$3.5 million.

Gonsalves explained that the solar PV project is expected to be managed and operated by local electricity services provider, VINLEC, as that company has had considerable experience working with such technology as they have implemented similar projects which are currently operational at several of the company’s facilities.