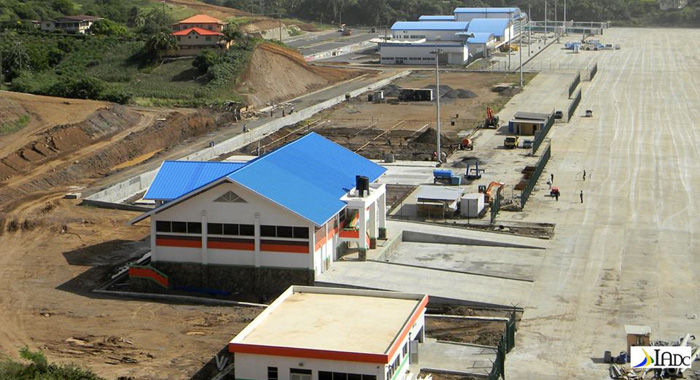 This AIDC photo, uploaded to Facebook on Aug. 16, 2016, shows works to the west of AIA, including hangar construction and road network development.

The main opposition New Democratic Party (NDP) on Tuesday released a video advertisement scoffing at Prime Minister Ralph Gonsalves over his failed promise that the United States football team would have landed at the Argyle International Airport for their return match against the local team on Friday.

“ULP massive, join Papa at the Argyle International Airport this week to witness the arrival of team USA,” the voiceover in the ad says as footage is shown of one of the small planes that landed at the airport as part of test flights last November.

The ad by the NDP was released hours after Gonsalves told a press conference in Kingstown that he regrets that the U.S. team is unable to land at the airport.

The airport, which has been under construction since 2008, has missed completion deadlines annually since 2011, including the most recent, June 2016.

And instead of welcoming American footballers at Argyle International Airport, Gonsalves on Tuesday found himself expressing disappointment at a report that only one Customs officer was on duty at the main E.T. Joshua Airport Monday night.

According to a tweet by American sports journalist Grant Wahl to his 774 thousand followers, this resulted in him spending three hours in the Customs line, where one person was “going through every bag and suitcase of every person who enters the country”.

The tweet included an 8-second video shot in the Customs lines at the airport, where staffers often snap at persons who as much as check the time on their mobile devices, point out to them the no cellular phone use sign.

Gonsalves had promised during his Independence address on Oct. 27 last year that Labour Day in New York will come to St. Vincent when the US team play Vincy Heat in SVG.

“What a weekend that will be next year, with our overseas nationals and visitors arriving at the Argyle International Airport,” Gonsalves had said to cheers, although he had erroneously said that the game would have been on Feb. 2.

But almost nine months after a LIAT ATR-72 aircraft landed at the unfinished airport in what many dismissed as an election gimmick, the still incomplete airport is in no position to accommodate commercial flights.

The NDP, in its mocking ad, said that only the first 10,000 persons would be allowed at the game.

At that point, the footage is of construction vehicles moving along an unpaved dusty segment of the airport construction site.

“The usual transportation arrangement will be in place. Everything on sale,” the voice-over continues as the footage cuts to an aerial shot of what appears to be derelict construction vehicles used at the airport.

“Three for 10,” the voice over said, mentioning a common phrase associated with the beer bargains at events.

Taking on a more serious tone, the voice over said that the NDP takes the opportunity to wish the nation’s footballers and the country all the best in the game, ending with, “Let’s go Vincy!”

“I regret very much that we don’t have Argyle International open to bring in people from the United States. I really expected the airport to be open by September because all the persons   involved in the construction and everything else – preparation — had provided all the assurances and they gave me the documentation. Clearly, that hasn’t happened but we are near to the end.”

Rudy Matthias, chair of the International Airport Development Company, the state-owned firm responsible for construction of the airport, told a meeting of stakeholders, including the prime minister and Minister of Sport, Cecil “Ces” McKie, on April 1 that the airport would have been completed by the end of May, even with bad weather.

On Tuesday, Gonsalves, who turned 70 on Aug. 8 and says he is in good health, said that when the airport is complete, he will make every effort “once I’m on this side of eternity, this side of life, not yet on the other side of eternity, … that we can get a big match involving the United States football team and ours and to have it at a time when it is appropriate to bring a lot of our national home to watch it and to watch other games.

“There are many things we have to organise around what would be an important event, and not only an event, it is a process, in terms of the airport,” he said.

Meanwhile, in a social media broadcast, NDP activist Douglas DeFreitas said the purpose of the ad is to wish Vincentian footballers and the nation, all the best for the return game against the United States.

“But because Gonsalves made such a big joke about team USA and everybody flying into Argyle, we decided to take HIS joke and make joke with it. It’s what he Gonsalves himself would refer to as PICONG. So he can’t vex,” DeFreitas said in the social media broadcast.

“If the viewer is confused, the viewer should address his or her questions to the man who has caused all the confusion.

“Spending HUNDREDS OF MILLIONS OF PUBLIC FUNDS – who knows how much? – to say he building an airport:

“- with no proper plan

“- with NO ACCOUNTABILITY as to how public money is being spent

“- while everything else in the country is falling apart!

At Tuesday’s press briefing, Gonsalves welcomed the U.S. team to St. Vincent, saying, “I want to wish our own team all the best.

“I know that Team SVG, we are playing now really for our respect and dignity, because we can’t go forward any longer,” he said of the Russia 2018.

The prime minister noted that the match will be of some importance to the United States in relation to their ranking in the group.

“And we really have to make sure that we do a lot of things better in football,” he said of the game locally, even as he added that his statement was not a criticism of the current leadership of football in the country.

“I’m not getting involved in that, but I think that everybody would say that whatever progress we have made, we need to do better.

“We need to have a conversation and the government is prepared to play its own path in it,” Gonsalves said.