Leacock against any challenging to Eustace at NDP convention (+Video) 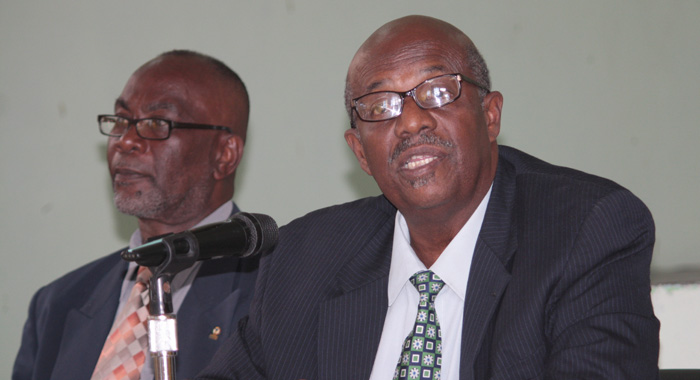 President of the opposition New Democratic Party (NDP), Arnhim Eustace, need not worry about a challenge at the party’s upcoming convention from the man that many believe will replace him as the party leader.

St. Clair Leacock, one of the NDP’s two vice-presidents, told iWitness News on Monday that he will not challenge Eustace for leadership of the NDP, a position he has held since October 2000.

“Let me be blunt about it. I will not challenge Mr. Eustace for the leadership of the NDP,” Leacock, who is also MP for Central Kingstown, told iWitness News in the interview, which focused on leadership transition in the NDP.

“I do not think it is the right thing to do,” said Leacock who retained his seat as Member of Parliament for Central Kingstown in the December 2015 general elections, even as Eustace was returned for a fifth term in East Kingstown.

“I think the most important thing for me to do right now as a vice president of the New Democratic Party is to maintain loyalty and ensure that whatever happens that the New Democratic Party does not implode. And that can happen if people feel it is a race to the finish and everybody begins out there with some kind of primary campaign situation. It will not augur well for the party.  And I think in that regard I am going to maintain the loyalty road to him and watch the situation unfold,” Leacock said.

(Scroll for video of complete interview)

The NDP is expected to have a convention before year-end, the first in more than two years.

The convention is widely anticipated across the political divide especially as it comes on the heels of the December 2015 general elections in which, according to the official results, Eustace led the NDP to a fourth consecutive defeat.

The convention also comes at the end of Eustace’s latest three-year term as president of the NDP.

There have been speculations about whether Eustace, who turns 72 on Oct. 5, will bid for another term as NDP president, a position he has held since succeeding NDP founder, former prime minister, Sir James Mitchell.

Eustace removed all doubts about his plan of action when he told iWitness News on Aug. 18 that he will allow the NDP convention to determine his future.

“If they say, ‘Eustace go’, ah gone,” Eustace told iWitness News in the Aug. 18 interview, adding that if party supporters say stay, he will do just that.

Political observers have speculated about whether Leacock would challenge Eustace for leadership of the party.

But Leacock told iWitness News on Monday that he would not do that and would discourage his colleagues from doing so.

“If I knew of any of my other colleagues who were going to challenge him, I would discourage them. I think it would not help them.”

Leacock said the objective of the NDP is to gain government and noted that  Eustace has been MP for East Kingstown since 1998 and is loved dearly by his constituents and even more so the people of Sion Hill.

“If there is the smallest iota of perception in that constituency that he was unceremoniously treated or pushed out the seat, we could lose [not only] Mr. Eustace but we would also lose East Kingstown and Sion Hill,” Leacock told iWitness News.

He, however, said he has not known of any threats by Eustace that he would resign as MP for East Kingstown if he is removed from the NDP presidency in a manner that he considers untoward.

Leacock’s position comes although, based on the results of the last general elections — which the NDP had rejected as flawed — he is the only of his party’s candidates who registered improved performance over the 2010 poll.

Asked if his personal ambition does not include becoming prime minister of St. Vincent and the Grenadines, Leacock said, “To be honest with you, it does not consume me. But it is a responsibility I will shoulder if I am called upon to do.”

He noted that he rose to the top of the Cadet Force, Football Federation and Employers Federation without aspiring to those positions when he joined.

“Sometimes, I feel his pain that he did not achieve prime ministership,” Leacock said.

The NDP has appealed the High Court decision to throw out two petitions it filed challenging the results of the December 2015 polls.

The party is hoping that those appeals will be heard this month and that the court rule in its favour.

If that happens, Vincentians could see fresh elections being ordered in Central Leeward and North Windward.

Leacock, however, said that he believes that in such a situation, Prime Minister Ralph Gonsalves would favour general elections.

‘a matter of timing’

He told iWitness News that it is fair to ask about leadership transition in the NDP but added that it might be “a matter of timing”.

“I have trusted Mr. Eustace’s judgement on political matters for the last 15 or 16 years since he invited me to be a senator in the Parliament of St. Vincent and the Grenadines and at this time I have to continue to trust his judgement that he understands the national importance of this matter, the political importance and he is constantly weighing the options that are available to him and will, at an appropriate time, make in his political sojourn to make that decision.”

Leacock said Eustace might be considering things that the public might not see, such as ensuring that “the baton is properly passed; that the hand that is receiving it is well-positioned”.

He also suggested that Eustace is looking at the financial and other considerations of the NDP.

“So we don’t know all that he is taking on board but, clearly, there has to be some transition.”

Leacock said that while being a vice-president of the NDP brings him closer to that decision, political leaders sometimes keep these issues “in their bosom”.

“Yes, I am close. I have expressed views on the matter before.”

He said that Eustace received the baton from Mitchell and has to secure the successful passing of the baton to someone else.

Leacock, however, said he would not adopt iWitness News’ language that Eustace’s legacy is at stake.

He noted that Mitchell was in office at the time when the baton was passed to Eustace and “defeat was in sight”.

The NDP was voted out of office in March 2001 after 17 years in office, retaining just three seats in the 15-member Parliament, while the remainder went to the ULP.

Leacock noted that Eustace led the NDP from having three seats in Parliament in 2001 to now having seven, compared to the ULP’s eight — the results of both the 2010 and 2015 elections.

Regarding Eustace’s decision to put his political future in the hands of the party’s convention, Leacock said that if he were Eustace, he would have “attempted to influence the convention a little but more in the income.

“But it may well be — and I am trying to see it from his point of view — that he wants the endorsement from the convention, which is our highest decision maker, so as to say that during his term in office they were completely satisfied with his report card and after they have made that decision he may decide that in fact he wants to accept the mandate and continue.”

Leacock said he is sure that Eustace must be considering that if the next elections are held in 2020, whether he would want to be the person leading the NDP then.

But Leacock said that he if he were to advise, he would say that Eustace should not take on that challenge.

He noted that he is just six year’s Eustace’s junior, adding that by the next general election, he would be approaching his 70th birthday.

“So, God’s willing, if I can maintain good health, I can speak of the next term in office. If I want to measure the fact that Sir Louis [Straker, MP for Central Leeward] is in office at age 75, 76, I can say I am good for another two terms. But I am for now taking it one election at a time and 76, 77 starting a prime ministerial term can be quite challenging, tough on the body.”

Eustace has been criticised as lacking charisma.

Leacock, however, said he does not want to get into “the public questioning of the persona issues”, adding that Eustace and Gonsalves are their own persons.

“I don’t think we have to mirror someone just to have success,” Leacock said as he praised Eustace’s “democratising” of the NDP.

‘There is a lot of liberty and freedom in the party — of expression, which he has really encouraged; diversity of views and tolerance. He has had to face the uphill challenge of financing a party in a very hostile environment and he has been able to do that very well,” Leacock said.

He said that while it might be true that Eustace is not as charismatic as other persons, the individuals who make that criticism give him a lot of marks for honestly, integrity, trustworthiness, technical knowledge of and predictions about the economy.

“But people will say that does not count as much as the ability to hug and kiss and be warm and to be engaging and to be greeting and so forth. So we would have to make a determination of what we want, or whether we want a mixture of those personalities.”

Regarding his own ambition regarding leadership of the NDP, Leacock told iWitness News he takes it “one day at a time, sweet Jesus”, but denied being diplomatic in his response.

Leacock identified other persons who he said are potential leaders of the NDP, namely MP for the Northern Grenadines and NDP vice-president Godwin Friday, MP for West Kingstown, Daniel Cummings, and MP for North Leeward, Roland “Patel” Matthews.

He said the NDP, however, has not contested a poll to determine the public’s view on who should become the next leader of the NDP.

A senior ULP official recently told iWitness News that Leacock is a “braggadocio” who is a “coward”, afraid to challenge Eustace for leadership of the NDP.

Leacock, however, said what the person described as braggadocio is, in fact, confidence and that he does not think that any Vincentian perceives him as a coward.

“Let me say it as confidently as I can say it: I believe that I have been well-prepared and prepared more than many in the political front at the moment, on both sides of the fence to run the affairs of St. Vincent and the Grenadines. I have wide experience: from military, from that of education, from that of business, from that of sports, from that of culture and from politics itself. It’s been extensive.

“But that doesn’t mean I must be insensitive to the process by which a leader would emerge in the New Democratic Party,” Leacock told iWitness News.