Much to ponder as Vincy Heat face Guatemala 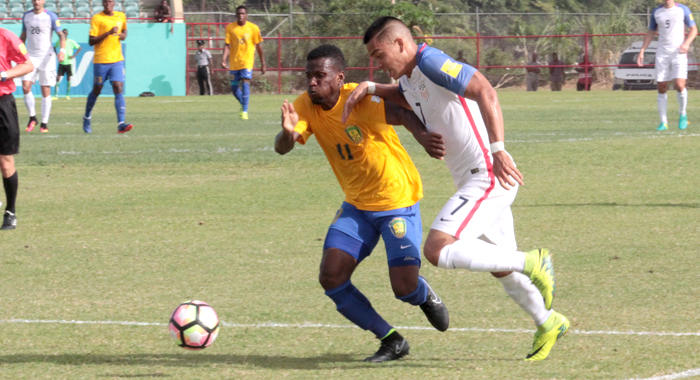 Vincy Heat stave off a US attempt at goal. (IWN photo)

St. Vincent and the Grenadines footballers — “Vincy Heat” — will go into their last match in the semi-final round of the CONCACAF Zone FIFA World Cup Qualifiers with a fixture against Guatemala away at 8:15 p.m. eastern Caribbean time (ET).

After suffering five defeats, conceding 25 goals while scoring 3, the Vincentians will be looking to salvage a bit of pride by at best manufacturing an upset win or limiting the scoreline to under 5-0.

Another 4-0 defeat will see SVG equalling their goal tally of 29 in the 1992 Qualifiers. This included a roof topping 11-0 beating at the hands of Mexico at altitude. A 5-0, which is the average scoreline for SVG against teams from Central America, will see them reaching the 30 mark of goal conceded, which happened in the 1996 Qualifiers.

In the current campaign, they have suffered humiliating losses of 6-1 and 6-0 to the United of, 3-2 and 6-0 to Trinidad and Tobago and 4-0to Guatemala.

On Friday in front of their home fans, Vincy Heat were put to the sword by the United States, who raced to a 3-0 half-time lead thanks to goals from Bobby Wood, Matt Besler and a penalty from Jozy Altidore, with substitute Christian Pulisic increasing the scoreline with two second half goals and Sacha Kljestan adding another.

The United States, despite the big win, still are not assured of qualification since the result of Trinidad and Tobago’s match with Guatemala ended in a 2-2 draw. A win for the Soca Warriors would have seen the United States clinch their spot in the final round hexagonal.

On Friday Klinsmann was a happy coach after garnering the expected 3 points but he would have been concerned with the openings that the Vincentians were able to make in his defence.

In the 26th minute, it was the quick work of goalkeeper Brad Guzan who was able to deny Oalex Anderson from a header.

The home team also found the back of the net twice but both were ruled to be offside.

SVG will head into this evening’s match looking for ways to put together more cohesive play in midfield, while hoping that the strikers will overcome what is their goal-shy inhibition.

The coaching staff will also be pondering what combination is best suited to curb the porous attributes of the defence.