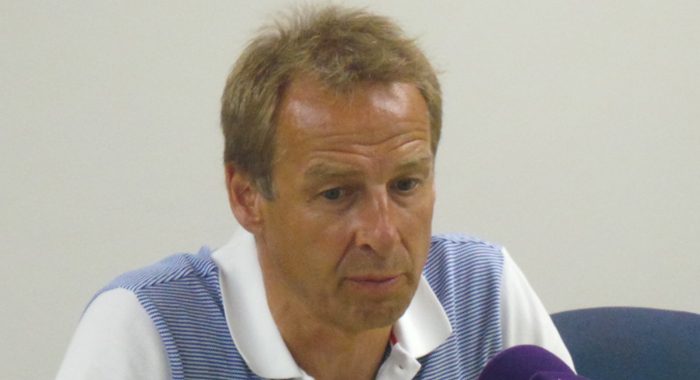 A question by a Vincentian sports journalist ruffled the manager of the United States men’s national soccer team and his press officer, resulting in an angry response at the post-match press conference at the Arnos Vale Sports Complex on Friday.

Despite defeating St. Vincent and the Grenadines 6 goals to nil on Friday, the United States are not assured of qualification to the next round of the 2018 Football World Cup since the result of Trinidad and Tobago’s match with Guatemala ended in a 2-2 draw.

A win for the Caribbean team would have seen the United States clinching their spot in the final round hexagonal.

But the draw means that U.S. coach Jurgen Klinsmann could see his team not making it to a “hex”.

This is a matter that was an obvious concern to Klinsmann and his camp, based on his reaction to a question from Vincentian journalist E. Glenford Prescott during the media conference at the National Sports Council conference room.

Klinsmann, seated alongside press officer, Michael Kammarman, were all smiles as he responded to questions from the U.S. media and St. Lucia-born journalist, Robertson Henry, who seemed to have been observing some esoteric arrangement of “not upsetting the subjects”.

The mood of Klinsmann and Kammarman suddenly changed when Prescott asked,

“You are on the verge of qualification but should you not qualify, what would be the future of Jurgen Klinsmann?”

The U.S. coach blinked a few times then responded: “Erh… About Qualification?”

“You are on the verge of qualification but should you not qualify, what would be the future of Jurgen Klinsmann?” Prescott repeated.

Klinsmann, with a wry smile, said: “We are not using that term.”

He then thanked he media and rose from his seat, still smiling. However, as he moved towards the door, he muttered: “It had to take an asshole to ask that question; just stupid.”

One member of the U.S. media infantry on hearing the question, said, “I never know St. Vincent has tabloid papers.”

Vincentian journalist, Jules Anthony, who writes for The News newspaper, said Prescott’s question was a stupid one.

Kammarman, seemingly seething with anger, moved towards Prescott and said, “You are stupid. That was a very stupid question.

“I gave you a chance to ask a question and you ask that stupid question,” he further said and exited the room.

On his way down the stairs, he continued shouting, and Prescott responded: “Know your goddamn place. I am not your PR team, so I’m not going to ask questions for your comfort.”

This exchange continued down the stairs and out of the building with Klinsmann throwing angry glances and the diminutive Kammarman replacing height with decibels.

The pair, still seething, then headed for the team bus.

While the question was clearly unsettling to both men, Kammarman was also reacting to an earlier conversation, when he was informed by Prescott that someof the information that he had published on the USA Soccer website about the Arnos Vale Playing Field was incorrect and needed to be corrected.

He appeared annoyed that he was being told of his many factual errors in the piece and possibly the fact it was being pointed out by a journalist from St. Vincent.

Klinsmann, for his part, has been under a tremendous amount of pressure to hold onto his job following a string of mediocre results in recent months.

The extent of this was highlighted in a piece in June 2016 by Nate Scott on the website “For the win” and entitled: “Jurgen Klinsmann should be coaching for his job tonight”.

The piece was written just before the United States took Costa Rica in a must-win match in the group stage of the Copa America Centenario. The coach had come under pressure after the United States had lost 2-0 to Colombia in the tournament opener.

They were able to improve to reach the semi-finals of the tournament where they lost 4-0 to Argentina.

In assessing Klinsmann, Scott wrote: “While this team certainly hasn’t performed to its potential, and there is some truth to his critiques of young American players, the reality is this: Klinsmann deserves much of the blame for the team’s current form, and if it continues, U.S. Soccer should look to bring in a new coach”.

Scott further said: “Klinsmann is a coach caught between two worlds –he wants to play the stylish soccer he promised when he came in as the national team coach and technical director, but knows he needs to keep his job by getting results. This is the line just about every national team coach in the world must walk, and it’s not an easy one. Coaches must provide a vision for the future in order to keep their jobs and to keep hope in the hearts of fans, all while getting the results each nation demands. Again: It isn’t easy. Each coach has to handle it in his own way.

“Smart coaches know this has to happen organically, over time. The most successful national team coaches pay lip service to playing more stylish soccer, challenging their players to improve, all while building a dependable core of players who understand their roles and grow comfortable with each other. With stability comes comfort, with comfort comes expression, with expression comes style.

And, in a statement that was like honey mixed with gramaxone, Scott said: “I firmly believe Klinsmann would be a perfectly good technical director, and I also believe that he is out of his depths as a national team manager.”

It might be understandable then that in the circumstances such a question from Prescott would create so much discomfort for the coach and the man the responsible for protecting him from the media.

2 replies on “US coach angered by Vincentian journalist’s question”