Gov’t figures not true reflection of the economy — Eustace 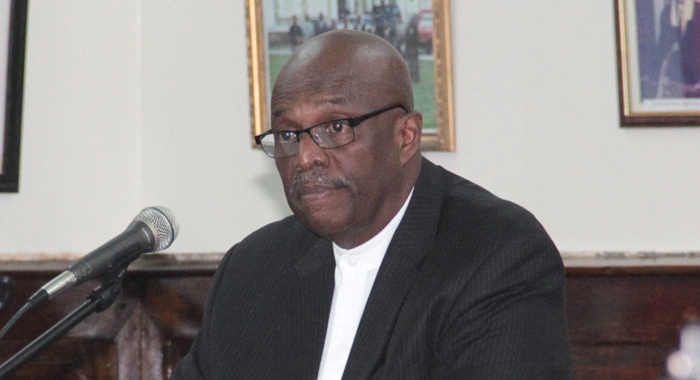 The figures that Prime Minister Ralph Gonsalves presented to the media last week is not an accurate reflection of the performance of the Vincentian economy up to July this year, says Leader of the Opposition, Arnhim Eustace.

Gonsalves, who is also Minister of Finance, told the media last week that total revenue and grants for the seven months ending July 31 was EC$336.24 million.

He said this compared favourably to EC$315 million during the comparable period last year, an increase of 6.7 per cent.

Gonsalves said the economy had shown “much improvement” during the period even as he wanted “difficulties remain. We are not in an era of plenitude”.

Eustace, however, noted that total revenue, without grants, was EC$327 million, while expenditure was 332 million.

“So, without the grants that you got from outside, for your expenditure, you would have a deficit again. And this is rated as a good performance,” he said Monday during his weekly radio programme on NICE Radio.

Gonsalves had also said that capital expenditure fell by about one quarter, moving from EC$ 38 million dollars last year to EC$27 million this year.

Eustace noted that capital expenditure is for creating employment in the country.

“But we’re still doing better,” Eustace said sarcastically. “I don’t understand the logic… This can’t be a good report. It can’t be anything to be proud about.”

“So all these things are designed to fool the public you know. And if you don’t bring the information before the public to improve their understanding and their perception of what is happening in our country, we are failing the public.

“This is not anything to brag about,” Eustace said.

He said that he bet there would be a deficit in the recurrent budget at the end of the year.

“And you will not meet your estimates for the money you say you are going to spend on projects in the budget for the year. You are already down by one-quarter on that alone.”

Eustace said new projects are important to create new jobs in addition to the permanent jobs in the civil service.

Eustace said what was presented was not the whole picture of the economy, but rather the fiscal side, dealing with revenue and expenditure.

“Government revenue and government expenditure that is only one item when you look at the whole economy in terms of how well we are doing… It’s really bad and very deceptive to be telling the public that our economy is improving. It’s a lie. It’s a lie,” Eustace said.

He said other factors that should be considered to make a preliminary assessment of how well the economy is doing includes consumption, which, he said, really means whether people have money to spend and whether they are spending it locally on goods and service.

He said that Gonsalves did not say anything about consumption.

In terms of investment, Eustace said that the government has already admitted that its own investment — the capital projects, has already fallen by 25 per cent.

“So they have nothing to say except the fact that it has fallen by 25 per cent.”

He said that bank loans to the private sector had fallen and, therefore, financial institutions have too much on hand and are therefore taxing depositors to get them to remove their money, saying this was the case with RBTT earlier this year.

“These things are not in here in that statement by Gonsalves. You don’t just look at a few figures in the government expenditure and the government revenue and say we are improving. You have to look at all these other factors here.”

Eustace also said that the government did not mention about the balance of imports and exports.

He said that in the case of St. Vincent and the Grenadines it is negative because the country is importing many more times what it is exporting, adding that the situation was far better before Gonsalves came to office.

Eustace said the country had to earn foreign exchange, mainly through the agricultural sector, which he said is “virtually dead”.

“This is a poor picture. We are sending zero bananas to the United Kingdom. Now that the French market is opening up, we can’t even go with the St. Lucia delegation to go and talk with the French. All these are factors Gonsalves needs to include when he is discussing this issue. Instead, he gives you three figures and says we are improving. He leaves out consumption, he leaves out investment — including government and private investment, and the balance between exports and imports,” Eustace said.