Car belonging to drug accused set on fire outside his house 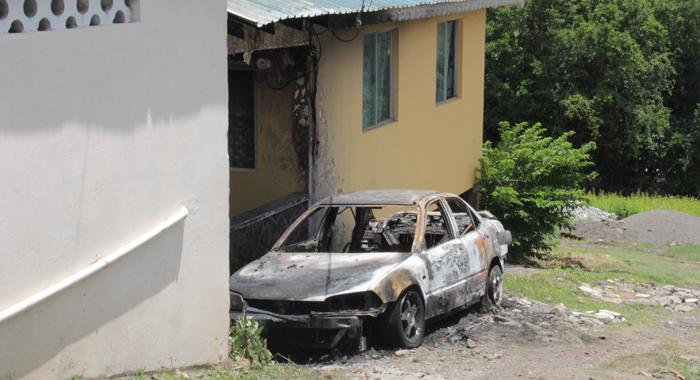 Jafari Robertson’s burnt out car outside his home in Prospect. (IWN photo)

A car belonging to Jafari Robertson, who is on remand awaiting trial on a cocaine possession charge, was burnt outside his home in Prospect Sunday night.

A female resident of the house who declined to give her name but said that she is in her mid-20s, told reporters on Monday that she and her 14-year-old brother were sleeping in the house when the fire occurred.

She said she went to bed around 12:30 a.m. and was awoken by the sound of a loud explosion sometime before 1 a.m. Monday.

She said she thought the sound was a vehicular accident on the main road nearby.

The woman said she also realised there were persons outside the house talking a lot.

“I could hear a lot of voices but I didn’t realise that they were actually calling me to get out of the house — because the neighbours had seen it burning already,” she said in reference to the fire which had spread from the car to the house.

The car, P9800, was parked very close to the house and the woman said she and her brother couldn’t exit via the main door because the room was too hot.

She said when they exited the house — via another door — they were told that the neighbours had already called the police.

“They had called the police but they (police) were taking long so I decided to call a police [officer’s] personal number and they came immediately. They started putting out the fire using the neighbour’s garden hose without the fire brigade because it took a while.”

The woman said that the two officers who responded to her call to the personal telephone number were from the Rapid Response Unit.

She said they also attempted to contain the fire, which had spread to the roof of the house.

The woman said that after the fire was extinguished, “We realised that something was inserted into the gas tank — like a piece of cloth. So maybe they used that to put the fire in, because you could see where the cloth burned… That is where the fire started, I believe.”

She said that Robertson had a lot of stuff in the back if his car.

“He had a lot of valuables in the back of the car. Like I said, he had a boutique in town and he closed it down and he would put all the things in the car and sell them and replenish stock.

“What we believe is that most of the stuff was removed from the car. However, yesterday, I am sure that the car was locked and the entire house was locked before I decided to go in my bed.

“It was burned with this door open,” she said in reference to the left rear door of the car, which was open.

“The door also had a screwdriver in it to keep the glass up from slipping down and we met the screwdriver on the other side on the mud over there. I don’t know if that is how they got into the car,” she said.

The woman, who said her relationship to Robertson “is not important”, was not upfront about Robertson’s location, saying, “he is not here at the moment”.

Asked if she knows how he might be contacted, she said, “You’ll not be able to. The public is not able to.”

She, however, said that one of the reporters would be able to say where Robertson is. “I saw you taking notes at the magistrate’s court last week,” she said.

Robertson was in August jointly charged with Mosiah Coy of Union Island that on July 30 at Prospect, they had in their possession 3,367 (7.42lbs) grammes of cocaine, with intent to supply to another.

Coy and Ezekiel Tash, of Prospect, were also on Aug. 3 jointly charged that between July 20 and 30 at Prospect, they “did agree with each other that a conduct shall be pursued which, if the agreement was carried out in accordance with their intention, will necessarily amount to or involve the commission of the offence of drug trafficking, contrary to Section 310(1) of the Criminal Code”.

Union Island resident Alex Stewart, who was jointly charged with all three of the men on all three charges, was granted composite bail in the sum of $160,000 with two sureties.

The men were ordered not to leave the country without the expressed permission of the court and were also ordered to surrender all travel documents.

Stop notices are also placed at all ports of exit and entry.

Coy and Stewart are to report to the Union Island Police Station on Mondays between 6 a.m. and 6 p.m.

Tash and Robertson are to report to the Calliaqua Police Station Mondays between 6 a.m. and 6 p.m.

Their next court hearing is on Oct. 3.