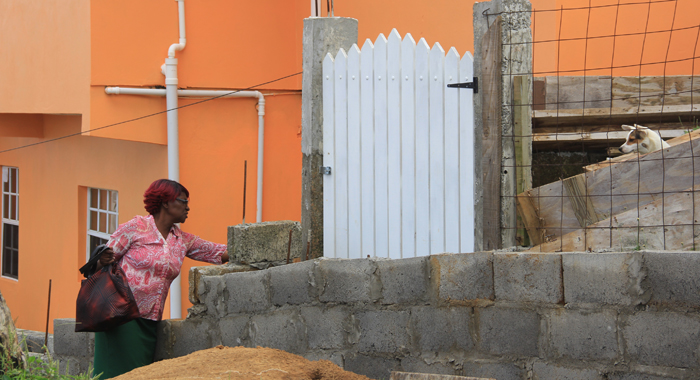 The wall, which has been constructed outside Rosita Browne’s house, prevented her from opening her gate. (IWN photo)

A 59-year-old Fair Hall woman says she is being prevented from using an eight-foot public access road to the east of her house although a plan of the area approved by and lodged at the Lands and Surveys Department in January 2016 shows that the road exists.

Rosita Browne told reporters on Friday that she has had to resort to asking two neighbours to walk through their private property because a wall has been built in the public access to her house, preventing her gate from opening.

But a plan of the land, drawn by licensed land surveyor Benson Quamina based on a survey he did in September 2015, and lodged on Jan. 12, 2015, shows that there is an 8-foot north-south access road running along the eastern boundary of Browne’s land.

The plans of the two other plots to the south of Browne’s property show that the 8-foot access runs along the eastern boundaries of those plots and connect to a concrete main road in the area.

She is appealing to the Physical Planning officials to do their job, adding that she does not see why she has to go to court for the police to enforce the law, as the law enforcement agents are suggesting.

Browne said she has been living in the area in upper Fair Hall for 25 years on a plot of land given to her husband by his relatives.

She said they have a deed to prove that the land does belong to them.

Browne said after her husband left for Canada in 2007, her son died about three months after. Soon after then, she started having problems with people pulling down her door.

Her pipe will open at nights and people would peep into her window at her daughters then go to the shop and talk about it, she said, adding that, as a result, she decided to fence the property.

Browne said that man who lives elsewhere in the village, but has a sibling living in a family home next to her, made the threats.

She said that in 2013, there were more issues about her not being allowed to walk the road.

However, she ignored them, Browne said, adding that in 2014, there was a problem with a tree that was infested by woodlice and the insects were spreading to her property. She said she tried to get the owner to cut the tree but he did nothing about it.

She informed the Ministry of Agriculture, who instructed the owner to cut the tree, but he refused until the woodlice began spreading to yet another neighbour’s property, Browne said.

The owner of the tree then came and cut it in January 2015.

Browne said she was inside observing the felling of the tree and observed that the manner in which it was being cut that it would fall into her yard.

However, other neighbours came and helped the owner but he left some of the termite-infested wood in her yard.

Browne said her daughter asked the man why he left all the infested wood in the yard and he told her she would not be able to walk back there.

“When we are together, he doesn’t interfere with us, but when she is by herself, he would tell her not to walk there.”

Browne said that last Easter Sunday, she went to the airport and when she came back, she met her gate nailed up.

“I was wondering what was going on. I tried to pull away the galvanize with the intention of going and call the police and a cutlass was raised at me…” she said.

She told reporters that the cutlass was raised by the same man whose relatives live in a nearby house.

Browne said when she called the police and they told her to come to the station and file a report. However, when they heard that a cutlass was pulled at her, they came and summoned the man to the station.

“They carried him down to the police station, the police warned him. Since that — I would not lie on him — he has not interfered with us. But he came back last week and joined in building the wall.”

Browne said that a villager told her that he is being paid to build the wall.

“I was sick of having to go to the police that often but [at] Planning, which I think should have dealt with the situation from the start, I am being pushed around. It’s like every week I am losing a day or two from my job and it is getting to the point now where I’m getting attitude.”

The self-employed seamstress who used to operate out of her home, said she has had to move her business to Arnos Vale because for four months she couldn’t get any customers to come to her house because of the man’s threats about the road.

“Because anybody come here, they don’t want anybody to come here. So I moved down to Arnos Vale last year,” she said.

She said that the Physical Planning department has told her that they have written to the man telling him to stop building the wall.

“I have three plans from the other three plots that were surveyed to show that every plot has an eight-foot access road… Even people who are 70-plus told me they walked this road, so this road has been here for a long time. But they (the neighbours in question) are the only ones who are saying there is no road,” Browne said.

“It is simple. Let me go my way. If there is one peaceful person on this hill, at least two, it’s this lady and I,” she said, pointing to another neighbour’s house.

“I usually say to people, the only persons I should argue with are my children and my husband.”

When we visited on Friday, Browne accessed the area where the wall is being built by passing through another neighbour’s yard east of her property.

But she cannot enter her property on that side because the wall that is being built makes it impossible to open her gate on what her plans, and those of her neighbours’ plots, show to be an 8-foot access road.

“I access through two other neighbours’ yards. They gave me permission. That’s their private property. That is the public road, but my daughter and I can’t use it,” Browne said.

“I just want planning to do their job. That is my main purpose for bringing you here,” Browne lamented.

She said the persons who are preventing her from using the road are claiming that she is fighting for land. This is God’s land. Not mine. This is God’s earth. There is nothing for me to fight for because everything we have has to stay here.

“I think these people totally lost their way because they are looking in the wrong place. Look to Jesus, not me. It is only when we have peace of mind and peace within you can share peace. If there is war inside, there will be war on the outside. So all I want is for Planning to come and deal with their problem because the police are saying it’s not their problem. It’s a Planning problem. And that’s all I want them to do. Give me and my daughter our way and we can go and people can come at my home.”

Browne said that her daughter, who is 17 years old, is preparing her school-based assessment project, but can’t function properly because of the on-going dispute.

“She went down to the police station a few Saturdays ago and told them she cannot handle it anymore,” Browne said.