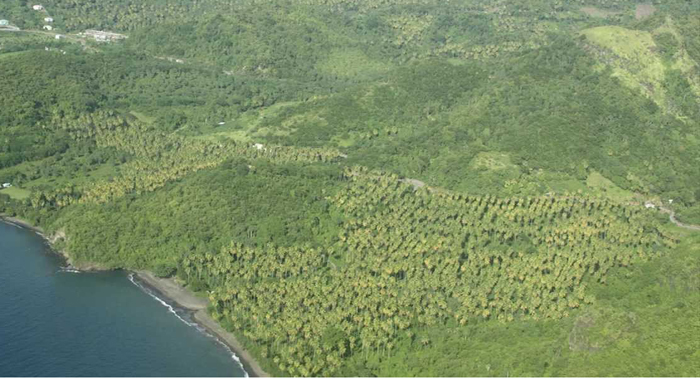 Peters Hope in the background with Mt. Wynne in the foreground.

He told the media last week that the lands have been sold to Canadian investors, but did not disclose their identities.

“The land is being sold to them [by] National properties for seven million dollars. They have paid down, I think, three million dollars already,” Gonsalves said.

The investors have applied for an alien land holding licence, which, Gonsalves said, is expected to be granted soon.

The Canadians are doing two projects — about 40 villas and a small hotel of about 200 rooms, the prime minister told the media.

Gonsalves said that the investment comes as the construction work on the Argyle International Airport is “winding down”.

He said Karisma Hotels & Resorts is interested in part of Mt Wynne-Peters Hope and Minister of Economic Development, Camillo Gonsalves, was able to secure a visit to St. Vincent by representatives of Sandals Resorts.

The Prime Minister said that the Sandals team went to see the Argyle International Airport and is very enthused.

“We will see what happens. … Karisma, Sandals, you have to appreciate St. Vincent is not the only place they want to build hotels,” Gonsalves said.

He noted that Karisma is building several hotels in Jamaica and Sandals is interested in building a hotel in Tobago.

“They built one not too long ago in Grenada, but the footprint they have in some of those countries are fairly small. They have a big footprint in Jamaica in terms of large tracts of land. We have a significantly large tract of land here, which they could get a sizeable portion to do what they want to do.

“But we have to compete with other people for investment monies, you know. There’re some people who believe that St. Vincent is just there and because we love it, everybody would just love it and come and put their money in it. You have to actually go and hunt and look for the money and get people interested in the investment,” Gonsalves said.

He further said that there is “a wealthy investor who has a home in Mustique, who owns hotels in Europe and is involved in other businesses” that is interested in doing development work in Union Island.