Woman says PM Gonsalves ‘attacked’ her when she was 15 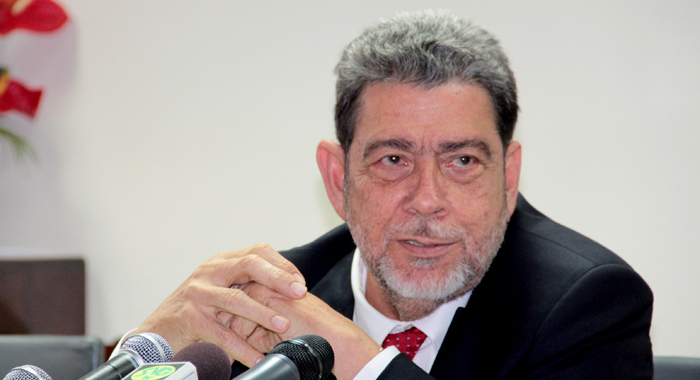 A Vincentian woman spoke through jeers and boos from supporters of Prime Minister Ralph Gonsalves as she said at his town hall meeting in New York on Saturday that he had “attacked” her when she visited his office in Kingstown when she was 15 years old.

Gonsalves was at the annual town hall event, which he holds with Vincentians when he visits New York for the United Nations general assembly.

The delegation at the UN and the town hall event included his wife, Eloise.

“Mr. Gonsalves, do you remember me, or — let me take off my glasses. Do you remember?” the woman, who identified herself as Miranda Wood from Layou St. Vincent, said as she spoke during the open forum section of the meeting, which was broadcast live in St. Vincent on Gonsalves’ Unity Labour Party’s radio station, Star FM.

“If I were to see you closer and I talk with you, I may remember you. But go ahead,” Gonsalves told the woman, who responded, “OK.”

The woman asked the Prime Minister why his deputy, Louis Straker, who is also MP for Central Leeward, where Layou is located, has not provided any proof to the Vincentian people that he has, in fact, renounced his Vincentian citizenship.

She noted that Camillo Gonsalves, the prime minister’s U.S.-born son — who was elected MP for East St. George last December — had proven to the Vincentian that he has renounced his citizenship.

The laws of St. Vincent and the Grenadines prevent a person from becoming an elected Member of Parliament if they are also citizens of certain other countries.

“That is one. I am running, I am going with speed,” the woman said during the open forum at the beginning of which the moderator had said people should ask their questions then leave the microphone.

“I am representing St. Vincent and I have concerns about what’s going on in St. Vincent and the Grenadines and especially for young women who have been raped over and over again. And, Mr. Gonsalves — Excuse me? Mr. Gonsalves, let me tell you this. I don’t care what none of you have to say,” she said, the latter part of her comments intended for some the persons at the meeting who erupted in booing, drowning out some parts of the woman’s comments.

“I personally, Mr. Gonsalves,” she said as the jeering and noise continued.

“Can I go ahead with what I am saying?” she asked and Gonsalves said, “Yes, yes, yes. Go ahead with your question.”

“Mr. Gonsalves, I am talking from a personal experience which in your opening you were talking about don’t talk about nothing you don’t know, speak from experience. OK? I am a young lady, I was 15 years old when I walked into your office and you attacked me…” the woman said, her voice again drowned out as the jeering and booing continued, making the rest of the woman’s comments difficult to decipher.

“I was 15 years old and on the national team of St. Vincent and the Grenadines I had a sponsor sheet and I went in with my sponsor sheet and asked you for a donation and you attacked,” the woman said when the jeering lessened, adding that she left Gonsalves’ office and ran into the arms of his secretary.

“… it hurts me up to today as if it was yesterday,” the woman said, mentioning her age, but the number was obscured by the jeering.

As the jeering continued, Gonsalves said, “Hold on, hold on,” to bring quite to the auditorium again.

“Miss,” Gonsalves said and beseeched to the crowd to be quite as some of his words became difficult to understand. “I will simply say that you can make an allegation that is not true,” Gonsalves said, telling the persons jeering the woman, “Wait nuh. Wait nuh. Wait. Wait.”

Regarding Straker’s citizenship, Gonsalves said: “I happen to know that Louis Straker is not a citizen of the Untied States of America…”

The woman spoke at an unusually rowdy town hall meeting, where some New York-based supporters of the New Democratic Party had gathered on the outside to protest the prime minister’s policies and some of his alleged actions.