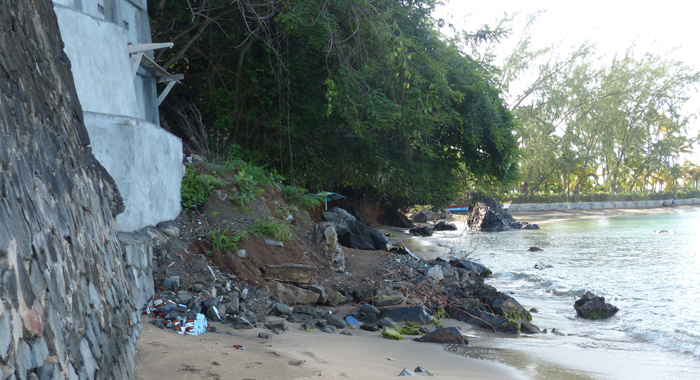 Without bias, this is the most wutliss, dutty-skin government. Ever. And for good measure, bad-minded too. Some people in it go dead bad.

The retaining wall (plumb in the centre) on Indian Bay beach is the property of the people of St. Vincent and the Grenadines. It was built by the Milton Cato government back when Dudley and Vilna Cox had their “Yvonnette’s Apartments” venture; right above it. The government is the wall’s charge. Whole.

The maintenance and repairs is the responsibility of the government. One hundred percent. That, however, is a misplaced expectation. The government doesn’t do maintenance let alone repairs. Like none ‘tall. That is especially ironic because the first thing Ralph did when he got into power was to darb up a few buildings with paint to lift the country that badly needed lifting. Now, he has it a goodish bit below where he met it in 2001. We have to resign ourselves to the fact that upkeep will have to wait on a different government. This one building apoat. God knows when that different government go be because for that to happen there has to be an opposition and you can’t see much prospects on the horizon right now. Unless you get the Hubble telescope to borrow. I will support this dilapidation truism in another piece.

About two years ago the wall started to break up. After much pleading and begging, over many months, the government stepped in. They gave it the Byrea Bridge treatment. Big and bold with them in-your-face style.

In 2010, after floods from Hurricane Tomas damaged the Byrea Bridge, the government sent a truck with a big rock and dumped it on the bridge, approximately where the worse part of the damage might be. When pressed in Parliament, the Minister of Works, Julian Francis, claimed that the rock was a “warning sign.” But whoa star, the rock needed its own warning sign. The rock, the danger it created and the damage stood for the next six years. As far as signs go, it was — and still is in my mind — a wonder of the modern world. It should have won Julian the Ig Nobel Prize.

Same how it went with the retaining wall. After all, it is the same players. Whaddayaexpect? The government stepped in with, you guessed it, a warning sign. Removing the danger was asking too much of a government that doesn’t do maintenance. Think the 2013 Belmont landslide — for starters. The fix for the wall was going to be too expensive. They said so, straight.

The Coxes, Dudley and Vilna, sold to the current owners. The failing wall caused damage to their property and they were trying desperately to get the government to stand by their responsibility. But this government is not going to spend one red cent unless the ULP vote is at stake. And trust me, read my lips good: this vote isn’t. I know dem people. I love them. The one-quarter owner, the front person (one of the four owners), is a rabid Ralph supporter to the point of actively campaigning for Comrade. Over several elections. (Them give me a red jersey; from a whole pile they in charge of.) That vote ain’t going nowhere; and the wutliss government knows it good. With the ULP vote done in the bag, sure, the government don’t need to spend no money on no wall. And they didn’t.

After the front owner was given the runaround (they are not young and, sadly, have mobility problems, magnifying the mean-spirited way they were treating one who worked hard to put them in POWER), they finally ended up in front of the number two Ubermensch. He must have recognised them good, from all the hard work; and all. Judging that the vote solid like Gibraltar, little Ubermensch summarily dismissed the humble taxpayer with: the wall go cost more than what your property is worth. What an asshole. “Major-league” is how George W. Bush would put it. This is a bad man who thrives on schadenfreude. My wife and another friend told me to cut out the insults. In this case, “asshole” (listen to sixteen of them here) is not an insult. It is an eponym and he is one of them what go dead bad. Them kind of evil deeds go flash before him when he dey pun deading; and it is the kind of question the Admissions Officer up above go ask of him. But not the one below, who, instead, go slap him on the back and say, well done my good and faithful servant. When he going south, he better take his fresh, sizeable mint with him; fresh, starting in 2001. He go need it. (I hear he does walk ‘round with it in great big rolls. Is several people what tell me.)

The above don’t concern you and me … directly. The fallout does. Directly. The one-quarter owner is who finally repaired fixed the wall two months ago. She did it personally. She one. Poor soul. And you know why? The body tell me they could not sleep at night thinking of the imminent danger — to the public. The government’s wording on the sign not only confirms the danger but publicly states that they are aware of its looming imminence. Still, the government and the asshole didn’t give a flying f-k. (Read that word – whole — and worse in the magazine with the boast, “The Best Writing Anywhere, Everywhere”).

Here’s the fallout. Indian Bay beach is the only excuse we have for a white sand beach on the island and we are building an international airport and can expect 250,000 tourists a year. Over the months the wall was falling apart, a whole side of rubble — backfill from Cato’s work — parts of the wall and pieces from the private property was slowly lodging itself in the path to get from one end of the beach to the other. After the fix, rubble, mud, back fill, broken wall and parts (turquoise in the pictures) blocked the path solid — right to the sea.

But the public — and the few tourists — must be able to pass. By the government’s willful negligence and dereliction of duty, locals and tourists were forced to thread over the rubble … until it is now a de facto footpath. Where other countries lay down boardwalks, we do it with wreckage and ruin. I suppose they will class it as another wonder of the modern world; of foot paths. Welcome to the world of Ralph and his Minister of Works way of doing the people’s business. Even after a private individual dug deep into their pockets and did their job for them, even after that freebie, they wouldn’t even scrunt and put in our, our two cents to clean up the mess. I believe it is because Indian Bay beach is not the airport’s budget. It goes to show just how much they know about tourist and tourism. Apoat is apoat and tourism is tourism and never the twain shall meet. Apoat is for exporting dasheen; at any cost. Ask Saboto.

P.S. Julian, you can send take down the sign now. Somebody done fix the wall.

5 replies on “A wutliss government”