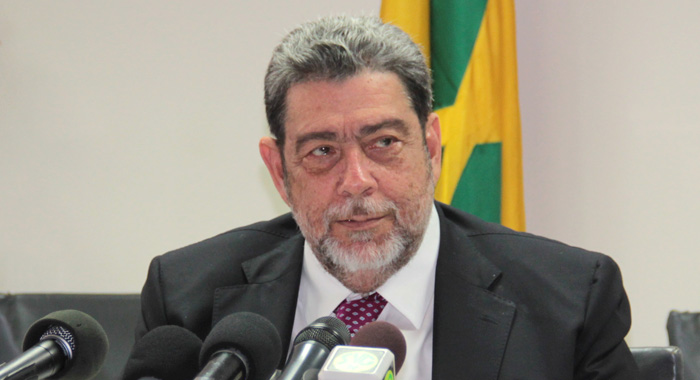 Prime Minister Ralph Gonsalves has dismissed the latest sex allegation against him, saying that in the absence of “tested” evidence he would not get involved in “sideshows”.

“I’ll tell you something, Ashford, I don’t intend to comment on matters which constitute essentially sideshows,” Gonsalves said in response to a question from journalist Ashford Peters at a press conference on Tuesday.

His comments came two weeks after former national netballer Miranda Wood told him at his town hall meeting in New York on Sept. 25 that he had “attacked” her at his office some three decades ago when she was 15.

“The woman at the town hall meeting said something, I responded immediately and I am finished with that,” said Gonsalves, who in his immediate reaction had said that Wood could make an allegation but that doesn’t make it true.

“In the case of the 2008 allegation of which you spoke, you know all the processes that went through with that,” Gonsalves said of the case eight years ago when a female member of his security detail said he had sexually assaulted her.

“But the point is this I’m making: you’re not going to get me into these kinds of commentaries. So, you can pose your question, you can make all the comments you want on them. I have said what I have to say and that’s that,” Gonsalves said to Peters, who, in his question, had said that Gonsalves has been labelled a “sex predator”.

“The point about it is this: if you want to get a sound bite for the radio or you want to get something for your newspaper, I just answered you. What I’d allow you to do now, when you are finished with that, and you’re finished with your monologues, I would just move on. So you can go ahead, make all the allegations who say what–” Gonsalves said.

But Peters retorted that he was not making any allegations but was questioning Gonsalves on allegations made publicly against him.

“You are the prime minister,” Peters emphasized.

Gonsalves, however, maintained that he had answered the reporter’s question.

“I just answered you, you know but you may not like the answer I have given to you. If somebody makes an allegation that Ashford Wood, Ashford Peters, is a thief, that he is defrauding people, and in circles where homosexuality is seen as a thing, Ashford Wood is seen as a homosexual, he is this, he’s that, the point is this, you may respond or you may not respond. You may take action or you may not take action. Is the allegation true?” said Gonsalves, who has successfully sued persons and entities for defamation.

“So I answered you and I give you that as background as to how I treat allegations, and that is a record that is there. So, if you wish to occupy the rest of the time with posing the questions … monologues, I give you my answer.”

But the journalist then asked Gonsalves if the allegations have caused any injury or damage to him or his family.

Gonsalves kissed his teeth and said:

“That sounds like you are defeated and you want to ask something at the last minute.”

Peters, however, pointed out that he was asking a question

“I [am] done with that you know,” Gonsalves said, adding that he had not refused to answer the question, as Peters claimed.

Peters, however, said he did not have agenda.

He has also denied that allegation.

One reply on “In the absence of ‘tested’ evidence, PM ignoring sexual assault accusations”