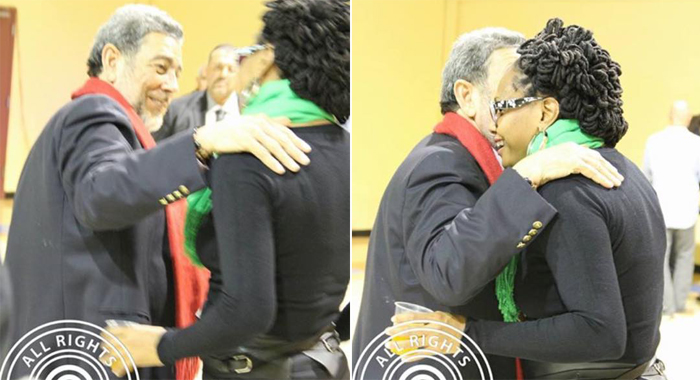 Gonsalves’ latest accuser, Miranda Wood, said more important than these photos is what she and Gonsalves were discussing in New York last year. (Photos: Vincy Powa/Facebook)

The Vincentian woman who on Saturday said at a town hall meeting in New York that Prime Minister Ralph Gonsalves “attacked” her in his office in Kingstown when she was 15 years old, is standing by her story.

Miranda Wood, now 47, told iWitness News on Monday that in addition to the persons she confided in about the alleged incident three decades ago, she has spoken about it recently on two local radio stations.

“Since last year I have been talking about that,” she told iWitness News, adding that unlike when she spoke on radio, on Saturday, she identified herself by name.

Wood told Gonsalves during the open forum at his town hall meeting in Brooklyn on Saturday that he had “attacked” her when she went to his office to solicit a donation after she was selected to the National Netball Team as a 15-year-old.

“I will simply say that you can make an allegation that is not true,” Gonsalves told the woman after she levelled the allegation, which was made in the presence of Gonsalves’ wife, Eloise, and broadcast live via the internet and on his party’s radio station in St. Vincent and the Grenadines — Star FM.

Wood, a mother of two who has been living in the United States since 1988, said that the alleged incident had taken place two years before she left St. Vincent.

She said she had gone to Gonsalves’ law chamber with a sponsor sheet as part of a fundraiser that the national team was having.

The former Joggers team member who attended the Barrouallie Secondary School and later the Intermediate High School after she became a teen mother, told iWitness News that Gonsalves was no stranger to her.

“Gonsalves is someone who I knew very well. He came to my grandmother’s home on several occasions. He sat down; he ate with my family. When he used to be in MNU — I think that’s what the party was — my family was the family who sat down and made the little pin broaches that they used to wear… that is why I trusted him to go and ask for the sponsor.”

Wood told iWitness News that Gonsalves’ office was “near the first KFC” in the vicinity of Music Centre in Kingstown.

“You used to have to go up some stairs,” she recounted.

She told iWitness News she reported the incident to her mother, who responded by asking her if she was sure that it had indeed happened.

“Mommy didn’t do anything. We were close to Mr. Gonsalves — like the whole family. I don’t know if my mom actually like went to him in any shape or form,” Wood told iWitness News.

She said she also told an uncle and her brother some years later.

Woods also told iWitness News that she told another female about the incident shortly after it happened.

The female told iWitness News Monday night that they would prefer not to comment on Wood’s allegation but admitting knowing Wood “very well” — even before she left for the United States when she was a teenager.

But Wood’s story has been questioned in light of a photograph that began circulating on social media on Saturday in which she appears to be embracing the prime minister at his town hall meeting in New York last year.

Wood said she was speaking after the meeting to Gonsalves about a police officer in St. Vincent who she had alleged during the open forum had impregnated a 15-year-old girl.

During the town hall meeting in 2015, Wood told Gonsalves:

At this point, some members of the audience started to jeer Wood.

“Please, let the sister speak. It is an important issue she is raising,” Gonsalves responded.

Wood continued: “I could tell you this in person. I won’t tell you the police officer’s name, but what is the Ministry of Education going to do about this video that came out of St. Vincent. And, as a citizen, I’m very embarrassed about it and as a mother,” she said to a spattering of applause.

Wood was speaking about a video that had been circulating on social media at the time showing a number of secondary school students in uniform having sex.

In responding to Wood, Gonsalves said he knows a lot of police officers but if any has been impregnating teenage girls, he doesn’t know about that.

“… and you whisper in my ear and tell me. You can whisper and you can tell me,” the prime minister further told Wood during the interaction in 2015.

Wood told iWitness News on Monday that she has assisted a 15-year-old girl who was allegedly impregnated by the police officer she was speaking about.

She said she told the Prime Minister about the details of the police officer — who has since left the police force, apparently for unrelated reasons.

Some persons have said that Wood’s claim last Saturday was politically motivated, with some saying it was orchestrated by the opposition New Democratic Party to embarrass the nation’s leader — an allegation Wood has denied.

“It was bothering me for years,” she said.

Asked why she chose the town hall meeting to speak about the alleged incident, Wood told iWitness News:

“And it doesn’t matter if it takes me 30 years or 20 years to come forward. The bottom line, I am not lying on this guy… I chose to go in the town hall meeting so the whole world would know… I want them to know that things happen to people. I didn’t put myself in the situation for it to happen to me. That’s the reason why I chose an open town hall meeting.”

Wood said she is unaffected by the persons who have responded with doubt.

“I personally don’t care who believes me or who don’t (sic). The fact remains that Mr. Gonsalves and I and God above knew what went on in his office at the time. I don’t care about who wants to discredit me and say, ‘She is a liar. She wait until now.’

“When I spoke to Mr. Gonsalves, I could hear my voice starting to crackle. And in my head, all I can hear a voice saying to me, ‘Don’t cry. Be strong.’

“I could live with this decision what I make. I felt like a burden came off my shoulder,” Wood said.

Wood, who said she now works in the secretariat of a law firm as well as being a cook, said that this was the second of Gonsalves’ town hall meetings in New York that she, the first being in 2015.

She said she remained calm during her interaction with Gonsalves on Saturday.

“The reason was because I know I was telling the truth and there was no fear over me at all.”

Regarding the respond of the persons who booed and jeered her, Wood told iWitness News:

“When I left my home and I went into that meeting, I knew exactly what was going to happen so it didn’t surprise me in any way.”

She said she did not tell anyone of her plan to speak about the alleged incident at the town hall meeting.

Speaking on radio on Monday, lawyer for Gonsalves, senior counsel Anthony Astaphan, suggested that Wood claim was a page from the NDP’s playbook.

He, however, said that he would not advise Gonsalves to sue Wood.

“I mean, this is a tired story, a very tired story. The NDP has made this part of the culture now for the last 15 years. Ralph may decide not to give any life to it by taking any form of legal action against it but just rubbishing it politically,” Astaphan said.

Wood has become the third woman to accuse the prime minister of sexual assault.

In 2008, a female police officer who was a member of Gonsalves’ security detail and a Canadian lawyer of Vincentian descent said Gonsalves had sexually assaulted them in separate incidents.

The Director of Public Prosecution, Colin Williams, discontinued the cases brought against Gonsalves before trial because of insufficient evidence and his decisions were upheld on appeal.

Gonsalves has maintained his innocence in all three cases of alleged sexual assault.