Bahamas’ hurricane Matthew experience a lesson for the Caribbean 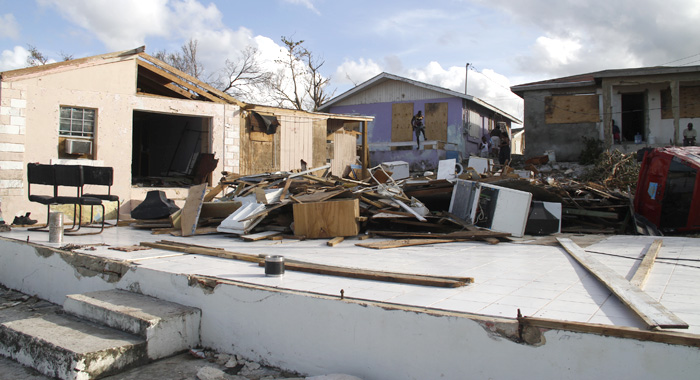 Ronald Jackson, executive director of the Caribbean Disaster Emergency Management Agency (CDEMA), made the observation to the Caribbean Media Corporation (CMC) on Wednesday as he reported on the findings of three Rapid Needs Assessment Teams (RNAT) that the agency dispatched to three Bahamian islands after the storm.

Preliminary assessments have found that Matthew left extensive damage to housing, public infrastructure and utilities in New Providence — where the capital is located, as well as North Andros and Grand Bahama.

CDEMA deployed three RNATs to these islands on Sunday and Jackson told CMC that the teams have found that the areas suffered storm surge and wind damage.

“Again, examples of coastal communities and infrastructure that may have been located too close to our coastline,” Jackson told CMC.

“Given the current threat of sea level rise, this an issue that we are going to have to confront going forward, not only in the Bahamas but in other small island Caribbean states.

“So, the issues we are seeing here in the Bahamas are a key lesson for us to look at in some of our neighbouring islands,” he further said.

CEMA deployed about 20 persons to expressed intent to rapidly determine the initial extent of damage to the three islands and to determine the priority needs after Hurricane Matthew.

“This will inform the broader CARICOM relief processes, but also, support key information to the Government of Bahamas as to where they may need to accelerate their intervention in terms of the more detailed assessment but also targeting needs,” Jackson said.

Jackson said much of the houses that did not survive the storm are thought to have not been built in keeping with “the very robust” building code in the Bahamas.

“So we have recommendations that will feature on how these ought to be treated going from the enforcement of the requirements, for self-help housing — recognising that this is certainly a feature within some of these communities,” Jackson said.

“We also have to look at how we intend to adapt to build within proximity of our coastline.”

He said factors to be considered include where there is the required setback and if not, what type or style of development should be introduced in these areas to ensure that people can co-exist within proximity to the hazards, “recognizing the height of land in the Bahamas is not extensive”.

In Lowe Sound, a community of North Andros, the district worst affected by the storm, many of the houses were located close to the sea and were destroyed.

“We recognise that there has to be balanced against what has been happening globally within the response to Bahamas and this is something we are going to be looking at.

“But, by and large, the housing in coastal areas, agriculture in Andros, which we understand is one of the bread baskets for many of the islands in the Bahamas is something that is also a concern.”

At the Bahamas Agriculture and Marine Science Institute (BAMSI) in North Andros, the banana plants were completely wiped out.

On Tuesday, veterinarian Keith Cox, who is responsible for small ruminants at the institute and Andros Island, said there was minimal loss of animals at the farm but the facility sustained some “structural damage, as expected”.

He said 250 goats that were imported on Sept. 20 were being treated for a new bout of “respiratory issues” that was initially associated with shipping and had been treated.

“Since the storm, we are treating again for that. Those animals had recovered from our initial set of treatments once they were quarantined but we have a new bout of respiratory issues that we are dealing with, in terms of the medical side of it. Also, we have a large number of hoof issues because of the rain, because of the wet. So, we are back to treating for respiratory issues and also treating the hooves,” Cox told CMC.

Jackson said that up to 90 per cent, and, in some case, up to 100 per cent losses were sustained in the agricultural sector in Andros, including the conch industry, a major revenue earner in the Bahamas.

He said the information gathered by the assessors will be provided to CARICOM to see how it can support in the relief and response.

Jackson praised the effort of the assessors, saying they performed creditably.

“We had a multinational team representing the Caribbean Community but also working very closely with the UN community, the UN Damage Assessment Coordination team. We had representatives from the government of Canada working along with us, representative from Map Action doing the mapping so we can better understand the special representation of the damage.

“So what we are seeing is Caribbean capacities being expressed. We want to thank all of them. We also want to thank CMC who has also been with the team in the field talking with the people in the community, getting a better understanding of the needs.

“One of the things that came out by having CMC participating with us was understanding the impact on the children, which is significant and should not be underemphasized. It is important that when we are looking at the psychosocial impact of a category 3-4 storm passing through the community here in the Bahamas and impacting children, who would will be seeing something like this for the very first time,” he said.