CARICOM to begin sending supplies to Haiti this week 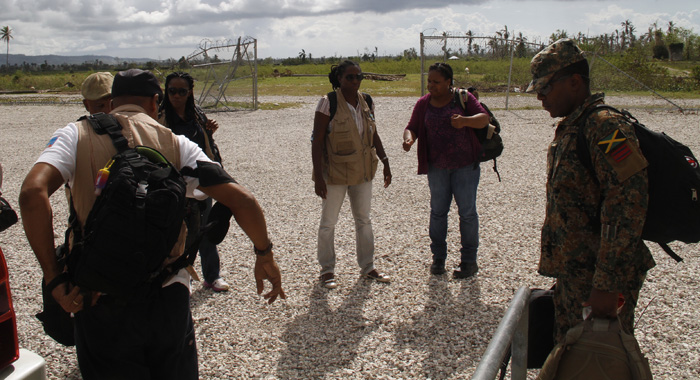 Members of the CDEMA team arrived at the EOC in Les Cayes, Haiti for Monday’s multi-sectoral meeting. (Photo: CMC/IWN)

The supplies come as the Barbados-based Caribbean Disaster Emergency Management Agency (CDEMA), moves into its second week of on-the-ground response in Haiti.

CARICOM will focus its efforts on Les Cayes and Jeremie, two communities in the south of Haiti that were most severely affected by the category 4 hurricane, which also devastated parts of the Bahamas, another member of the community.

CDEMA’s operations specialist, retired Brigadier General, Earl Arthurs, who is leading the CDEMA team here, told the Caribbean Media Corporation (CMC) that CARICOM is hoping that its supplies will begin arriving in Haiti on Wednesday.

“I think it would be more food and water and things for the children. And then, after that, the next consignment will be some building supplies and so. But we have people from the regional co-ordination centre in Barbados who are actually doing all the planning and stuff like that,” Arthurs told CMC after meeting with his team.

“My job on the ground is to give support to the emergency operations centre in these two devastated township,” he said.

The CARICOM Operation Support Team (COST) arrived in Haiti on Oct. 8 and has spent the last week visiting and assessing the affected areas and meeting with all the key operators in Jeremie and Les Cayes.

“And we have started to put a plan together to give them the support they need in the emergency operations centre and to provide support that CARICOM will be providing in food and building supplies.”

This week, the CDEMA team will be responsible for helping CARICOM to identify one of the communities that was badly affected within the Les Cayes area — where Hurricane Matthew has affected 110,000 persons, according to official figure.

“And we will then actually focus sub-support of that community,” Arthurs said, adding that the CDEMA team will also meet Monday afternoon with officials who will assist in identifying that community.

Haitian officials have called a coordination meeting of all responders in the southern area for Monday.

“We will then know exactly what has been done, what is outstanding, and needs to be done and what role we will be playing to support Les Cayes,” Arthurs said, adding that Monday’s co-coordinating conference would also help to get responders more organised

“Because a lot of NGOs and people try to do good but doing their own thing. And they need to be actually coordinated so that we don’t all do the same thing in the same area,” he told CMC.

Arthurs said that the eye of the hurricane passed over Jeremie and Les Cayes and, therefore, the impact of the storm there has been great.

“There are some communities that were impacted more than others. Agriculture has been devastated. You see the coconut trees and plantain trees are all uprooted, the cornfields have been flattened. So, agriculture definitely had been severely affected.”

He said that there are a lot of muddy rivers and this is the only source of water for some people.

“And so we have to be careful about that; the whole public health with dirty water — contaminated water. We have also a lot of people who lost roofs. Some lost their whole house. So there are quite a few people, especially along the coast, who have lost their dwelling; so we definitely need to get some housing support for these people,” Arthurs told CMC.

He said a lot of people are using school as shelters and officials have said that the shelters have to be closed so that school can reopen.

“But these people need some place to go and that’s why I think CARICOM is looking at getting some building supplies to get some houses — at least the roof on top first — because we need to get schools open. It has been one week and by Tuesday they say they will have school starting in some places.”

Arthurs told CMC that CDEMA’s sub-regional focal point in Jamaica for the north-western sub-region is already mobilising to get resources together for Wednesday’s shipment.

The retired general said that the two communities that CARICOM is focusing on are not yet in the recovery stage.

Arthurs said that one of the biggest challenges is that responders still do not know how many persons were affected by the cyclone.

“A lot of things are still guestimates because Haiti is such a big place and then the communication is not as good as it should be. There are some communities to the west that have not yet been visited. So even though we know there are certain levels of damage in those areas, it is difficult to put a figure on it. So, we are just adding as we go by,” he said.

Arthurs is leading a seven-member team composed of person with various types of expertise.

“I have a gentleman who is an engineer from Jamaica. He has been on several of our rapid needs assessment teams. He is a major. We have a varied amount of disciplines and experiences here and that’s why we are able to fit in whatever task they give us to do,” he told CMC.