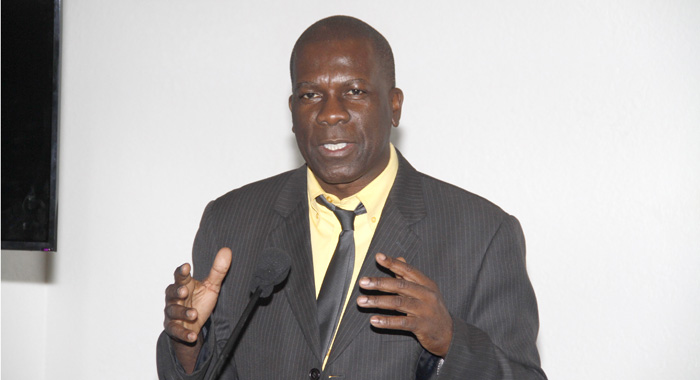 President of the Jamaica Agriculture Society (JAS), Norman Grant, says agriculture is not the Cinderella of the economy of the region; it is the lifeblood. (Photo: Kenton X. Chance)

GEORGE TOWN, Grand Cayman — The head of Jamaica’s largest farmers association says the rest of the Caribbean Community (CARICOM) can draw on his country’s experience as the region continues to battle with its US$5 billion annual food import bills.

Norman Grant, president of the Jamaica Agriculture Society (JAS), an umbrella association of farmers, has noted that Jamaica, through its “Grow What We Eat and Eat What We Grow” Campaign has over the last decades made some progress in curbing the amount of money leaving the country to buy food overseas.

He told a session dubbed “Sustainable and Profitable Value Chains in the Caribbean” during Caribbean Week of Agriculture (CWA), taking place here this week, that developed countries celebrate the fact that they attained that status through agriculture.

Grant told regional stakeholders that the campaign, which was launched in 2003, appealed to Jamaica’s 2.7 million citizens and its more than 220,000 farmers.

“And the achievement is just remarkable,” Grants said, adding that the campaign was launched at a time, when his country — which along with Trinidad and Tobago are CARICOM’s largest importers of food — was importing a weighted average of US$100 million in food yearly.

“Our domestic crop production was somewhere in the region of just over 400,000 metric tonnes,” Grant said, telling participants, that just 10 years later, Jamaica has reduced its weighted average annual food import bill by US$60 million

“And let’s do the maths because, by extrapolation, the campaign, the work of the farmers, has saved the Jamaican economy close to US$500 million,” he said, adding that domestic crop production has increased from 400,000 metric tonnes to over 600,000 metric tonnes.

He told the gathering, which included representatives of farmers’ organisations, farmers, and policymakers, that within a period of 10 to 12 years, Jamaica has increased its domestic crop production by 25 per cent.

“This means that the sector grew by a weighted average of 2 per cent per annum, which makes it the only sector within the Jamaican economy that has grown by as much as 2 per cent over the period of time, when you find that even the economic growth rate in the United States is less than 2 per cent.”

Grant said that this shows that the agricultural sector has a tremendous role to play not only in Jamaica but also across the region.

“And I share this example because in this Caribbean Week of Agriculture, … we want to establish the reality that the agricultural sector is not the Cinderella of the economy of the region. It is the lifeblood. It is our reason for survival, it is our way to economic transformation and prosperity for our people.”

Grant said that Jamaica has been able to reduce food import by increasing production of certain commodities, to the point where it is self-sufficient in poultry and eggs.

“One time, we were importing 90 per cent of the Irish potato [consumed]. Again, spearheaded by efforts of CaFAN (Caribbean Farmers Network), assistance of CTA (Technical Centre for Agricultural and Rural Cooperation), IICA (Inter-American Institute for Cooperation on Agriculture) and other agencies, including the Ministry of Agriculture, in particular, we are now producing close to 95 per cent of the demand for Irish potato as a result of the support we are giving to our farmers. And that, we think, is tremendous,” Grant said.

He said that Jamaica also produces a lot of the pork consumed there.

“So we have a lot more to gain,” he said, adding that the country is doing well because the farmers have responded to an important need.

Grant, however, said that finance is “an important plank” in the progress his country has made in the agricultural sector.

“This conference needs to ensure that we come out of it with some clear solutions as it relates to … financing that is accessible,” telling participants that in Jamaica, the development bank has loan guarantees for farmers.

“What you find is that a lot of our farmers do have great ideas but the lack of collateral makes it very difficult for them to access loans. So that is an important gap that we need to fill: the question of pushing from where we sit in this region to ensure that we accelerate the issue of land reform and the whole question of land titling, where our farmers are on lands for several years and they are cultivating on those lands, but they are not able to use those lands as collateral.”

He said the impact of Hurricane Matthew on Haiti shows that the issue of insurance needs to be put on the table and he called for a review of the catastrophic insurance programmes in the region.

“We need to commit those to discussion so that when we have disasters, you don’t find that our farmers, who have invested their own equity and their own time into developing their own programmes has to start from ground zero.”

He urged participants to use the opportunity of CWA 2016 “to ensure that we have clear alignment for the right siding and the correctness of the agricultural landscape in the region.

“If we are going to become an independent region, not only economically, but with our food, it is certainly going to be driven by a framework where our farmers have a critical role to play and we in the region are very excited about supporting that,” Grants said.